Republican Dan Cox entered the final four weeks of the gubernatorial campaign down in the polls and short on cash. And he’s being vastly outspent by his main rival, Democrat Wes Moore. Since Republicans always run uphill in Maryland, because of the 2-to-1 voter registration advantage that Democrats enjoy, all that of that is bad news for the Frederick County lawmaker.

Perhaps worse than all that for the Trump loyalist is his failure to take advantage of the single best opportunity he is likely to get to change the trajectory of the contest — Wednesday’s debate on Maryland Public Television and other TV networks.

Moore’s mandate in Owings Mills was to avoid a catastrophic blunder, anything that might suggest he’s a flash-in-the-pan — and he succeeded. It might not have been his best performance, largely because he is one of the more compelling politicians Maryland has seen in some time, but he more than cleared the bar.

Cox, by contrast, needed desperately to change the direction of the race, which polls suggest he could lose badly. But instead of reaching beyond his base (Joe Biden crushed Donald Trump here two years ago, 65% to 32%), Cox largely reinforced the conservative and MAGA themes he has stressed since launching his campaign.

Ever since Cox defeated former state Commerce Secretary Kelly Schulz in the GOP primary, analysts have noted that he faces a significant math problem: There aren’t enough Trump/Cox-type voters here for him to win. 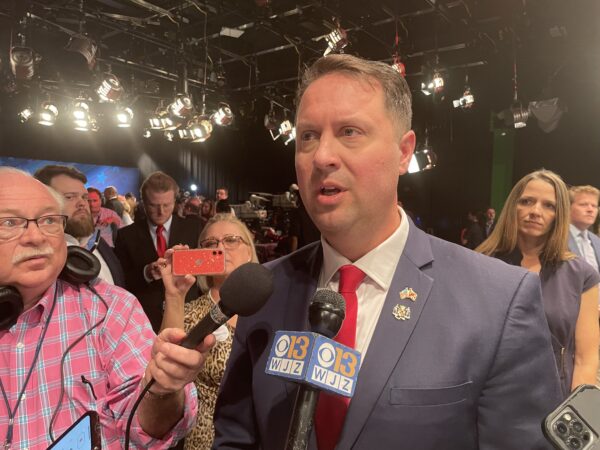 Cox did make some attempts to reach toward the middle, but they were viewed as half-hearted.

He described himself as a “civil rights attorney.” He said he worked “across the aisle” with Democrats in the General Assembly. And he fashioned himself as a key ally of popular Gov. Larry Hogan (R), even boasting that he once “had lunch” with the governor. Cox, who introduced legislation this year to impeach Hogan over pandemic public health mandates, gave the governor an “A” grade overall (Moore, noting that Hogan still has three months left in office, gave him an “incomplete”).

But these lines didn’t carry the sort of punch Cox brought when discussing the “indoctrination” of children or the requirement that some people get “experimental” vaccines. Democratic strategist and Johns Hopkins University communications professor Len Foxwell said it sounded as if Cox’s advisers had recommended “buzzwords” he could deploy “to rebrand himself.”

“He gave a couple of glancing waves at it, but [he] didn’t have his heart in it because it’s never been his intention to broaden his base,” Foxwell said.

Although the sparring that occurred between Cox and Moore on abortion, election integrity and public safety funding grabbed many of the headlines, the two also discussed education at length.

Echoing some of the themes that Virginia Gov. Glenn Youngkin (R) stressed during his campaign, Cox promised to restore “control” over education policy to parents. He said it’s time for schools to refocus on “reading, writing and arithmetic,” and he said he supports additional resources for the “STEM” subjects — science, technology, engineering and math.

Without giving specific details, Cox said the state should “end indoctrination and politicization in the classroom to make sure parents are empowered.” At one point, Cox appeared to suggest that schools were using textbooks that contain pornographic images. 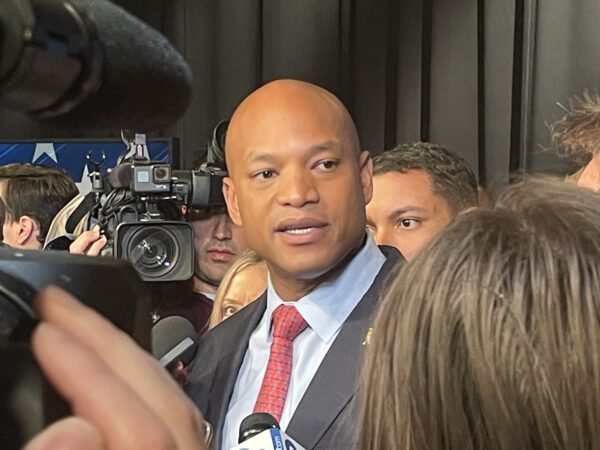 Moore reiterated his support for the multi-billion-dollar Blueprint for Maryland’s Future education plan and pledged to have it implemented. He pledged to use federal money to fund after-school, summer school and tutoring programs.

The Democrat also said the state will be “a partner” with educators and parents, particularly around issues affecting LGBTQ “youth and families,” seeking to contrast himself with his rival.

“When my opponent says he would ban this and ban that, he does not have the legal jurisdiction to do that,” Moore said. “These are local jurisdiction issues that the state works in partnership with local jurisdictions to make happen. I believe that our schools should be fair and inclusive. I do not want to see a situation [about students] who do not feel seen or do not feel heard. I would want the same thing for my child.”

Cox also advocated school choice and he said he would make sure buildings function properly. “I pledge to make sure that our schools actually turn on the HVAC and it works. We are going to restore world class education in Maryland.”

“Del. Cox has been very anti-public education,” said Bost, who teaches fourth and fifth grade students in Baltimore County. “The alternative gives us hope, gives us support and really listens to educators and families to make a difference. I don’t see how anybody who supports public education would support Del. Cox for this race.”

Glassman casts himself as an ‘independent’

As Larry Hogan proved in 2014 and 2018, Maryland Republicans are competitive in statewide races only when they lure huge numbers of Democratic and independent voters. Even in the years that Hogan prevailed, GOP candidates for attorney general, comptroller and U.S. Senate floundered.

Part of Cox’s struggle so far this year stems from the tepid support he is receiving from members of his own party. Hogan famously referred to him as a “QAnon whack job,” and many other Republican office-holders and candidates have kept their distance from the Trump-aligned firebrand.

Harford County Executive Barry Glassman (R), who is running for comptroller, continued his efforts to carve out his own identity on Thursday, when he distributed invitations to a Nov. 1 fundraiser.

The event is being held at Independent Brewery in Bel Air. “Join us at Independent Brewing for an Independent Comptroller,” the flier reads. Glassman, who is running against Del. Brooke Lierman (D-Baltimore City), said his win would “keep one-party control in check in Annapolis,” a near-admission that other Republicans aren’t likely to fare well.

At the Tawes Clambake in Crisfield last month, Glassman described himself as “the last normal, common-sense Republican left, in the middle.”

“Since the primary, people come up to me and say ‘you’re the last guy standing…’,” he added.

Battle of the debate-prep surrogates

If you’re a political junkie, or just keen on political discourse, it can be interesting to delve into how candidates prepare for debates.

Moore asked House Majority Leader Eric Luedtke (D-Montgomery) to serve as a Dan Cox stand-in in his debate rehearsals, while Cox had campaign manager Zach Werrell play the role of Moore during his prep.

Cox told Maryland Matters after the encounter that Werrell did an excellent job getting him ready. “He nailed it,” the candidate said. “Actually, he was a little rougher than Moore,” he added with a laugh.

Luedtke said he was chosen in part because he has heard Cox speak countless times on the floor of the House of Delegates. Asked whether channelling Cox posed a challenge, the lawmaker said it did not.

“He’s been pretty consistent in his extremism,” Luedtke said. “He lives in this alternate reality, and that sort of foundation of his beliefs and rhetoric has been consistent throughout the time I’ve known him.”

Moore leans into his military service

Moore has made his military service, particularly his time in Afghanistan, a centerpiece of his campaign. Now Moore is airing a 30-second TV ad emphasizing his time in the military.

The ad is narrated by Devin Flavin, a retired Army captain who served in combat with Moore. It features photographs of Moore and Flavin in the military, video of Flavin speaking to the camera, and footage of Moore on the campaign trail.

“So I served with Wes Moore in Afghanistan,” Flavin says. “When you’re in a combat zone with someone, you really get to see who they are and what they’re made of. And with Wes, you’ve got to remember, this is a man who was a Rhodes Scholar.

“He could have been doing anything, but he volunteered to put his life on the line for our country. To me, that says all you need to know. Wes is a natural leader. That’s how we all felt about him. And I know he’ll make a great governor.”

The Moore campaign said the six-figure ad buy will begin on broadcast and cable TV in the Baltimore and Salisbury markets.

Preparing for the transition

Hogan announced Thursday that he’s putting Lt. Gov. Boyd Rutherford (R) in charge of the state government’s transition to the next gubernatorial administration.

“We are fully committed to a smooth, orderly transition in Maryland and look forward to working closely with the incoming administration,” Hogan said. “Whoever is elected will inherit a strong recovery, record fiscal reserves, and a Maryland truly changed for the better.”

To prepare for the transition, the lieutenant governor has asked cabinet secretaries and state agencies to prepare reports to be handed over to the incoming governor after a winner is declared.

“Ensuring that this transition is the most professional and efficient process in our state’s history, is a top priority for myself and our administration,” Rutherford said. “I am honored to oversee this gubernatorial transition, as I will use my federal and state experience with administrative transitions to make sure all essential reports and additional guidance is provided to help Maryland’s incoming leadership succeed.”

During the lieutenant governor’s tenure as assistant secretary at the U.S. Department of Agriculture, he was heavily involved in the department’s operational transition from the George W. Bush administration to the incoming Barack Obama administration. He also served as the co-chair of the 2014 Hogan-Rutherford incoming transition.