For more than four decades, the annual J. Millard Tawes Clambake and Crabfeast in Crisfield has been a mid-summer endurance test, owing to sweltering heat, high humidity and the molten asphalt of the Somers Cove Marina.

Since returning in 2021 from a one-year absence, the Crisfield Chamber of Commerce’s signature event is now held in early autumn, to the delight of only everyone. So, while the feast remains the place to be for the powerful, the ambitious and the politically curious, it can also boast that it’s just a slice of heaven.

The 45th Crisfield Chamber of Commerce clambake, held on Wednesday, took place under azure blue skies and wispy clouds. A steady breeze kept the thousands of attendees cool and comfortable.

“I really love coming to [Eastern] Shore,” said Del. Brooke Lierman (D-Baltimore), a candidate for comptroller. “I think it’s a really wonderful opportunity to see many people from around the state, all in one place, at the same time. Frankly, that doesn’t happen almost ever.”

Every fourth year Tawes takes on the super-charged atmosphere of the looming election, and the 2022 edition was no exception.

Outgoing Gov. Larry Hogan (R), Lt. Gov. Boyd Rutherford (R) and Comptroller Peter Franchot (D) were all in attendance, as were many members of the governor’s cabinet. Hogan has always been highly sought-after at Tawes, spending hours at a time shaking hands and posing for photos. On Wednesday he and Rutherford were given keys to the city of Crisfield.

But it was those next in line — particularly gubernatorial hopefuls Wes Moore (D) and Dan Cox (R) — who drew the crowds and sparked the chatter.

Moore was engulfed everywhere he went, bear-hugging and high-fiving old friends and grabbing the hands of people he was meeting for the first time. Everyone seemed to want a photo with the man who public opinion polls (and campaign finance reports) suggest is in a good place heading toward November. 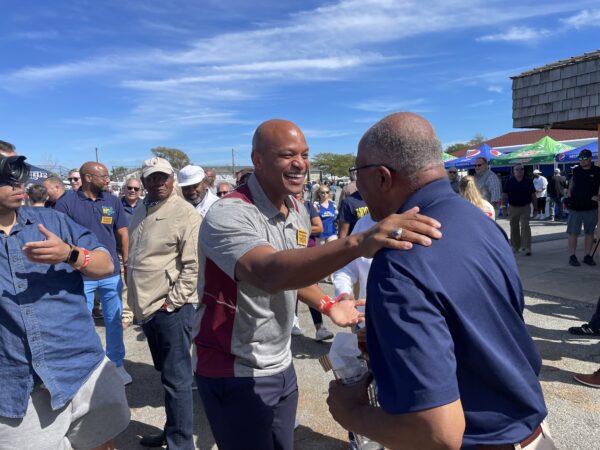 Former Baltimore Mayor Kurt Schmoke (D) shouted a greeting to Moore, who he first met decades ago when the candidate was a junior at Johns Hopkins University and a City Hall intern. “What I liked about him as an intern was that he was a good listener,” Schmoke said. “He just wanted to learn as much as he could about local government.”

In an interview with reporters, Moore cast the Trump-endorsed Cox as an extremist who is out of step with middle-of-the-road voters. The Democrat appeared to suggest that he will only debate Cox once, on Maryland Public Television on Oct. 12. That encounter will bring forward their “very different” values, Moore pledged.

Cox dismissed Jan. 6 questions as a media obsession. He said that when he encounters voters, they want to talk about inflation, the soaring cost of housing and vanishing savings. “We’re going to win a large majority of the independents,” he insisted. People “are very hurting, are intensely concerned about the economic problems that we’re facing. Talking about problems of them at this very moment.”

Cox again accused Moore of ducking debates. The two men shook hands, perhaps for the first time, just outside a Republican Party tent, where Cox had been eating.

When he saw Moore approaching, Cox put down his food, licked his fingers, and went outside to say hello. But the encounter ended abruptly when Cox demanded to know why Moore neglected to attend a candidate forum at Morgan State University on Tuesday.

“Good to see you,” Moore said, pulling away, as a campaign aide yelled, “We’ve got to go.” 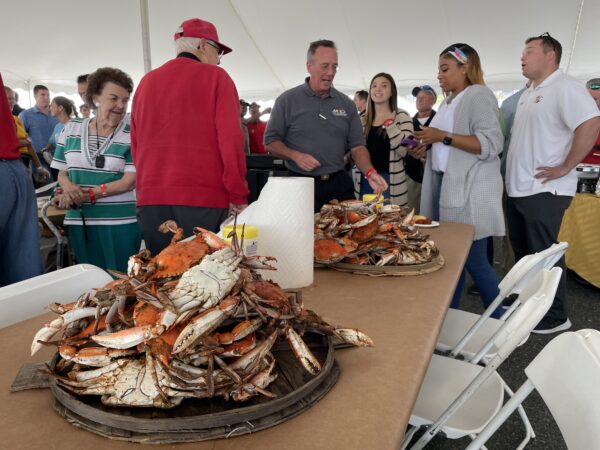 As it often is during the crab feast, the massive tent sponsored by Annapolis lobbyist Bruce Bereano served as the central gathering place for current and former elected officials and political insiders, and the place was jammed. But the general festival area was crowded too, with hundreds of picnic tables.

Throughout the marina parking lot, there were dozens of tents sponsored by an array of groups, music blaring everywhere, and festival-goers carrying box tops overflowing with clams and crabs, corn, and beers, some of which spilled en route to their tables.

“I like him as a person very much. I love his story,” she said. “I love what he’s done. I love his attitude.” Does Moore seem like someone the chamber could work with? “Oh, yes,” she said. “Absolutely.”

The only statewide Republican nominee to win Hogan’s endorsement this cycle, Glassman acknowledged that he is running in a difficult environment. Cox and Peroutka have both drawn criticism for their views about democracy.

“I’m the last normal, common-sense Republican left, in the middle,” he said. “Since the primary, people come up to me and say you’re the last guy standing that can be a check and balance” against Democrats.

In addition to the marquee races, Tawes is a command performance for local officeholders and challengers. Likewise for incumbent and would-be members of the General Assembly. They, too, were everywhere.

Tawes is a home game for Rep. Andy Harris (R) and his rival, former state Del. Heather Mizeur (D). Polls suggest that Republicans are likely to take control of the U.S. House in January, an outcome that, according to Harris would mean that “America has a chance.”

The six-term lawmaker, a former state legislator who has never held a leadership post, said he would be in line to be chair of the House Appropriations Committee agriculture subcommittee if the GOP prevails. “This district depends upon agriculture,” he noted in a brief interview. 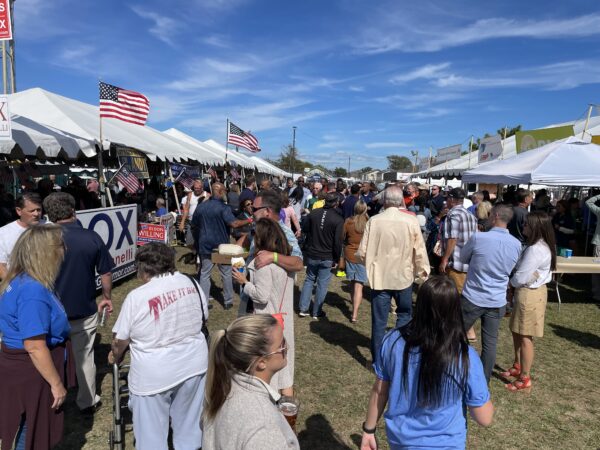 The scene at the J. Millard Tawes clambake and crab feast Wednesday. Photo by Bruce DePuyt.

Mizeur slammed Harris for voting against the infrastructure measure that will upgrade the port in Salisbury, improve broadband service in rural communities, and modernize a water treatment plant. “He has been an absolute failure as a representative for our communities,” she said. “What I’m finding — in living rooms and boardrooms — is an enthusiasm for toning down the partisan rhetoric and turning up the problem-solving.”

Franchot, who leaves office in January after 16 years as comptroller and 20 years in the House of Delegates, was on a farewell tour of sorts in Crisfield Wednesday.

Franchot said he has not decided on his future plans after an unsuccessful bid for governor in the July primary, but intends to remain active in some capacity — and is not contemplating retirement. He indicated that he will continue to reside in his long-time home in Takoma Park.

“I don’t know if I’ll ever run for office again,” grinned Franchot, who turns 75 on Nov. 25 — making him a half-decade younger than Joe Biden, who turns 80 five days earlier.

Louis Peck contributed to this report.