In their only face-to-face encounter of the campaign, gubernatorial candidates Dan Cox and Wes Moore engaged in a sharply personal clash of styles and substance on public television on Wednesday. If the two agreed on anything during a debate in the glossy studios of Maryland Public Television in Owings Mills, it’s that the other represents a dire threat to Maryland’s future.

The pair battled over a wide range of issues, including abortion, public safety and education.

Moore, a charismatic Democrat who is seeking elective office for the first time, sought to portray himself as equity-minded military veteran and former non-profit CEO who would govern with a sense of urgency.

Cox, a Republican state delegate from Frederick County and a full-throated supporter of former President Trump, pledged to be an advocate for parents. He said he would pursue a get-tough approach on crime, steer clear of government mandates such as those enacted during the pandemic, and offer a renewed emphasis on “freedom.”

Both men sought to align themselves with the state’s popular, term-limited governor, Republican Larry Hogan, whose biting criticisms of Cox have hung over the race from the outset.

While the candidates made passing references to their campaign platforms, the encounter was made memorable by the pointed attacks the two men lobbed at one another for the entire time they were on screen.

Cox, who is trailing badly in public polls and in fundraising, attacked first. “My opponent, he has sought to defund the police,” the lawmaker said. “He has sought — from the entire campaign trail — has sought to centralize education. I intend to put power in the people’s hands.”

Cox also criticized Moore’s work as executive director for the Robin Hood Foundation, an anti-poverty nonprofit organization based in New York, noting that he “now lives in a million-dollar house.”

Moore responded with apparent relish, reading aloud a tweet that Cox posted on Jan. 6, 2021, urging supporters to join him in Washington, D.C., to protest Trump’s defeat.

“We’re watching a perfect indication as to why Gov. Hogan called you unfit to lead,” he charged. “I’m standing on-stage right now with an extremist election denier whose rhetoric and whose policies are not just dangerous and divisive, but will take our state backwards.”

Cox said Moore would reverse policies and reforms put in place by Hogan, and he said Marylanders would see taxes and tolls rise if his opponent wins. The lawmaker pledged to restore “law and order” by placing those convicted of a felony in jail. He said at least six times that Moore would “defund the police” if elected.

The Democrat vigorously denied all of Cox’s allegations, repeatedly saying, “that’s just not true” throughout the debate. Moore said he would fight to get illegal guns and “ghost” guns off the streets, prosecute violent offenders, and collaborate with local and federal law enforcement agencies. 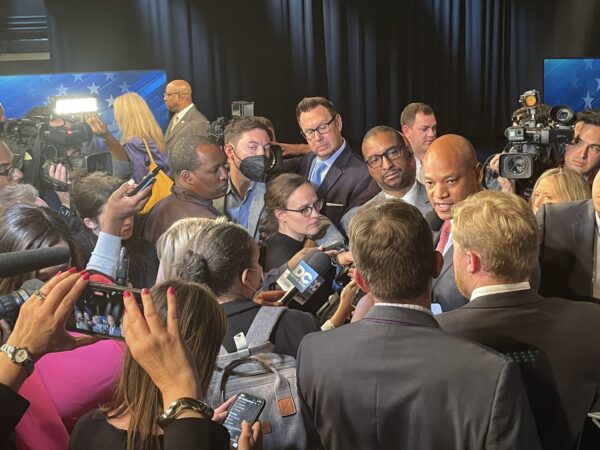 Moore has racked up a slew of endorsements since winning the Democratic primary in July, a point he hammered home in response to Cox’s allegations about public safety funding. “My opponent likes to say he ‘backs the blue,’” Moore said. “The irony of it is, the blue doesn’t back you, because the police officers have endorsed our campaign.” The director cut to a double-box shot in time to see Cox’s facial expression droop.

Clyde Boatwright, president of the state’s Fraternal Order of Police, which endorsed Moore, was among a group of people invited to watch the debate in the studio, and he underscored Moore’s point.

Although Maryland law provides broad abortion-rights protections, no single issue offered more of a direct contrast than the question of whether a woman should have the right to end a pregnancy.

Moore said he would seek to make Maryland “a safe haven” for women seeking an abortion. “I believe abortion is health care,” he said. “And I fully trust women to make this decision with their doctors.” Echoing a line used frequently by Hogan during the worst days of the pandemic, Moore said his administration would be guided by “science” and expert advice.

Moore said Cox would seek to “arrest” women who have an abortion, a claim the Republican denied. 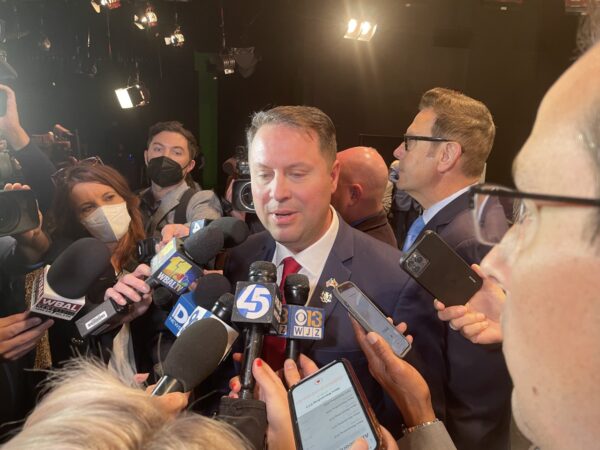 Cox, a father of 10, said his goal “is to make sure that everyone is safe, that women and children and the unborn all have equal protection and our supported by our laws.” He said Moore’s description of his views on abortion — which Maryland Democrats have sought to emphasize in recent days — offer proof that “you cannot trust what comes out of my opponent’s mouth.”

The two men also clashed on LGBTQ rights. Cox claimed that some Maryland textbooks “depict things that I cannot show you on television.” Moore addressed LGBTQ “youth and families” directly, saying: “I see you, and I hear you. And all policies that will be made will be made in partnership.”

Cox has repeatedly refused to declare that he would accept the results of the November election, saying only that he supports the rules governing elections. He was peppered with questions during and after the debate on this topic.

Cox’s running mate, Gordana Schifanelli, also watched from the studio. She said the encounter offered voters a clear sense of the contrast between the two candidates, though she struggled to come up with a favorite moment. She said he enjoyed seeing the two men shake hands. “I thought that was kind of nice,” she said. “I didn’t expect that.”

The debate ended on a chaotic note when the moderator, WBAL-TV anchor Jason Newton, sought to get the candidates to offer closing statements, as time was running short.

Cox, in a style reminiscent of Trump’s two presidential campaigns, spoke over Moore at length, alleging that he had been shortchanged during a prior exchange. Moore relented, a sense of exasperation in his voice. “Please, go ahead,” he said.

The debate aired Wednesday evening on Maryland Public Television, WBAL-TV in Baltimore, WRC-TV in the Washington, D.C., region, and on WBAL Radio. It is scheduled to be the only time the two major-party candidates appear together between now and Election Day. Third party candidates were not invited — though they will appear with Cox at an online forum on Thursday evening.