The subpoena seeks to compel McGrath’s testimony before the legislature’s Joint Committee on Fair Practices and State Personnel Oversight.

The panel is looking at why the Maryland Environmental Service awarded him a year’s salary in severance — $233,647, plus tens of thousands in expenses — when he stepped down as the agency’s CEO in May to become Hogan’s top aide.

McGrath, who resigned from state government in mid-August amid the protest triggered by the payout, has declined invitations to appear before the committee, though he has defended the severance payout he received in media interviews and a Baltimore Sun op-ed.

The legislature’s subpoena — and a second one for a top McGrath aide at MES, Matthew Sherring — are expected to be formally delivered early next week.

They were approved unanimously by a different panel, the Legislative Policy Committee, which is made up of the legislature’s presiding officers, Senate and House committee chairpersons — all Democrats — and Republican leaders from the two chambers.

The 24-0 vote followed a 90-minute session, held online, during which lawmakers reviewed previous testimony they had received from MES board members, McGrath’s former deputy, and others. 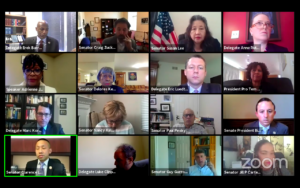 “In the midst of a pandemic and the economic crisis that is before us, this is not what we thought we would be doing,” said Senate President Bill Ferguson (D-Baltimore City).
“Allegations of corruption and misuse of power are serious and they require immediate attention. It is too important that we have the facts to make the appropriate decisions — and we cannot await to emerge from the current [coronavirus] situation in order to restore faith and trust in Maryland’s government.”

The Maryland Environmental Service provides environmental and infrastructure services to public and private entities, mostly local governments. Lawmakers are expected to make changes to its governing structure when they return to Annapolis in January.

McGrath served just 11 weeks as chief of staff, and the controversy surrounding his bonus has become a headache for Hogan. Testimony from McGrath that contradicted statements made by the governor could prove embarrassing for the second-term executive whose national persona has grown since the COVID-19 pandemic made him a fixture on national television.

Members of the MES board told lawmakers in August that McGrath pressured them to approve the hefty severance during his final days on the job, as he prepared to become Hogan’s staff chief — and that they signed-off on it because he assured them that the governor “anticipated” he would be getting it.

They said they felt it politically unwise to risk making Hogan (R) or McGrath angry.

Hogan has denied approving or recommending the payment.

On Wednesday, just before the vote to subpoena McGrath, Hogan wrote Ferguson and House Speaker Adrienne A. Jones (D-Baltimore County) to convey his support for reforms in MES policies.

He also appointed retired federal judge Frederic N. Smalkin to serve as secretary of the MES board.

“Our bipartisan focus must be on addressing the systemic problems at the Maryland Environmental Service that require substantial legislative changes to its governance structure, oversight, and management,” Hogan said in a statement.

“To begin providing immediate accountability, retired Federal Judge Frederic Smalkin has been named to the corporation’s Board of Directors. Judge Smalkin is a highly respected jurist with a long record of integrity, and I want to thank him for agreeing to serve on the board at this critical time.”

In an email after the vote, McGrath declined to comment.

His lawyer, veteran Prince George’s County defense attorney Bruce L. Marcus, said he would review the subpoena when he receives it.

“We have not yet seen the subpoena,” he said. “Obviously we will review it. Mr. McGrath is willing and available to address appropriate questions — and to the extent possible present a full account of events.”

Legislators hammered the MES board for its decision to give McGrath a lucrative severance as he prepared to accept another position that paid more than $200,000 a year at a time when the state’s budget was under intense strain.

They chastised McGrath for the travel he conducted as “CEO” of the state-created agency, for seeking reimbursement for global travel long after the deadline had passed, for appearing to “expense everything,” including meals with coworkers, for high-priced leadership training, and for taking steps to shield certain expenses from his former deputy, Beth Wojton, who left MES this summer after 32 years there.

Hogan, who served as appointments secretary for Gov. Robert L. Ehrlich (R), appointed six of nine MES board members and McGrath, in an unusual arrangement, appointed the other three.

Lawmakers played video of Hogan speaking at a press conference where he characterized the agency as “a strange creature that was created by the legislature. It’s not really under our purview. Don’t know much about what goes on over there.”

The co-chair of the panel investigating the severance scoffed at that claim.

“There seems to be some clear awareness at the highest levels of what MES does,” said Sen. Clarence Lam (D-Howard).

Because the Attorney General represents both the governor and the General Assembly, the Legislative Policy Committee and the Maryland Environmental Service must both hire outside counsel to represent them in any future negotiations surrounding McGrath testimony before the legislature.

It appears the last time the General Assembly issued a subpoena for witness testimony was when lawmakers attempted to force an Ehrlich aide, Joseph F. Steffen Jr., to appear before them. The bid failed when Steffen — known in political circles as “the Prince of Darkness” — could not be formally served because his whereabouts were unknown.

According to the Baltimore Sun, Steffen resigned from a state government job after admitting he had been spreading rumors on the internet about the personal life of Baltimore Mayor Martin O’Malley. He died in 2017 at age 57.