The controversy swirling around Roy McGrath, Gov. Lawrence J. Hogan Jr.’s former chief of staff, intensified on Tuesday when Maryland Environmental Services board members told state lawmakers they approved a hefty severance package for him only because he repeatedly assured them the governor was aware of the payout.

McGrath served as executive director for the quasi-governmental agency until he was tapped to lead Hogan’s staff on June 1, and the $233,647 he received — equivalent to a year’s pay — threatens to become a major second term headache for the popular governor.

At a legislative hearing, board members of the 50-year-old public works agency sought to downplay their role in MES’s day-to-day operations. They freely admitted that McGrath worked without a contract and that the agency had no formal severance policy.

And they were blunt in disclosing they feared the political ramifications that might arise if they denied McGrath’s request, given his future status as the governor’s high-ranking adviser.

Hogan sought Tuesday to distance himself from the severance McGrath received from his former employer, though he did not explicitly deny knowing about it.

“To be clear, I did not approve, recommend, or have any involvement whatsoever in any of these decisions made by the board of directors of MES with respect to the former director Roy McGrath or any other individual,” Hogan said in a statement issued shortly before the legislative committee hearing.

With lawmakers digging into the payouts that McGrath and his former deputy, Beth Wojton, received when they departed Maryland Environmental Services and how the agency is organized, Hogan said the state Department of Budget and Management will conduct its own audit as well.

“The current operating and oversight structure of MES was established by the General Assembly in 1993,” he said in a statement. “Our intention is to work with the legislature in a bipartisan way on legislation to reform the governance and operations of MES in order to provide for stronger oversight by both the executive and legislative branches.”

McGrath’s severance was first reported on Aug. 14 by the Baltimore Sun. He resigned as chief of staff on Aug. 17, after just 11 weeks on the job, saying he did not want to be a distraction. On Friday, he defended the severance he received, writing in a Sun op-ed that the MES operates more like a business than a state agency and that he was entitled to a corporate-style golden parachute.

McGrath was invited to participate in the Joint Committee on Fair Practices and State Personnel Oversight hearing Tuesday but he did not.

The committee’s virtual hearing ran three hours and felt at times like a legal proceeding, with lawmakers grilling MES board members and its new executive director in a courtroom-like manner. Many of the questions lawmakers posed were followed by long, awkward silences.

Legislators received hundreds of pages of documents related to the payment on the eve of the hearing, and they were poring over them even as witnesses spoke.

The agency’s longest-serving board member, Joseph Snee Jr., told legislators that MES’s human resources committee met in May to discuss McGrath’s request for a year’s salary as severance, and “agreed that the severance payment would not be made unless it was approved by the governor or the governor’s staff.”

“Mr. McGrath assured me that the governor was aware of the proposed severance payment and did not object,” said Snee, who was appointed to the MES board by the late Gov. William Donald Schaefer (D).

He then quoted an email he received from Wojton, in which she wrote, “Roy McGrath said that the governor anticipates a severance equal to one year’s salary.”

Board member William B.C. Addison Jr. told legislators the panel “was caught between a rock and a hard place.”

“It seemed as though we had no choice as he was transferring to a very powerful position that could have a future impact on MES,” he said.

A longtime state Senate staffer, Addison said he does not believe Hogan actually knew about the severance — only that McGrath claimed as much.

“I’m very upset about this, as Mr. McGrath put this board in a horrible position with no good outcome,” Addison said. “The board did what was in the interest of MES at the time.”

Neither Hogan nor members of his staff accused McGrath of lying to the MES board, but lawmakers said there appeared to be only two options — that the governor knew about the payout or that his former chief of staff misled his former boss.

“We’re facing conflicting information here,” said Sen. Clarence K. Lam (D-Howard), co-chairman of the Joint Committee. “Either Mr. McGrath misled all of you or the governor’s statement is incorrect.”

Given that the person providing assurances about the governor’s sign-off was the same person who stood to pocket a quarter million dollars, legislators said the MES board should have done more digging.

“You basically admit that you were in dereliction of duty because you failed to verify the representations of Mr. McGrath,” said Sen. Jill P. Carter (D-Baltimore City). “I’m curious as to why no one went to the governor or the governor’s staff.”

One board member, Dr. Richard P. Street Jr., said if MES officials “were given false information,” McGrath should consider returning the payout.

It wasn’t just board members who received assurances from McGrath.

The committee obtained text messages he and Wojton exchanged: 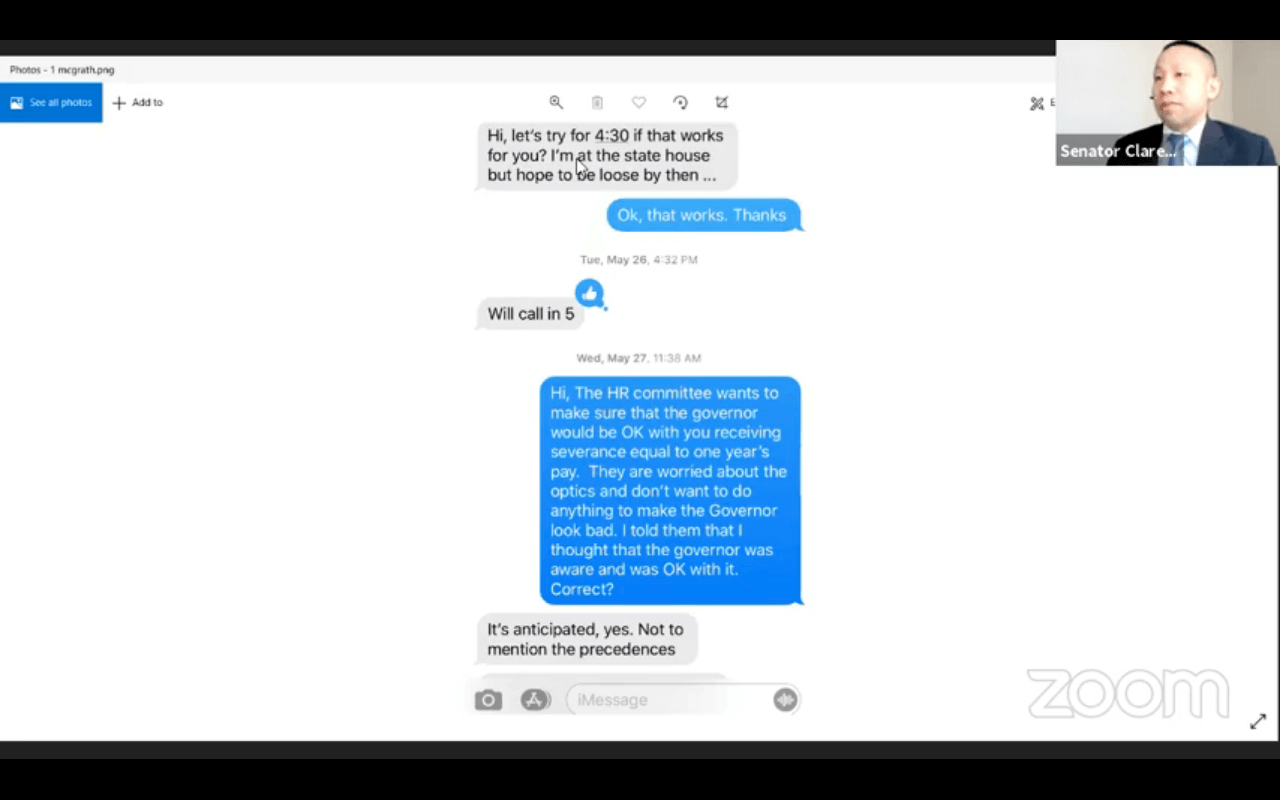 She wrote: “Hi. The HR committee wants to make sure that the governor would be okay with you receiving severance equal to one year’s pay. They are worried about the optics and don’t want to do anything to make the governor look bad. I told them that I thought the governor was aware and was okay with it, correct?”

Wojton received $209,765 in severance, the equivalent of one year’s salary, when she left MES.

Lawmakers also found fault with $55,000 in travel reimbursements that McGrath received on his way out the door.

Board members told the committee that Hogan’s former staff chief submitted 18 months’ of receipts at the end of his tenure. MES’s financial requirements stipulate that employees should file for reimbursement within five days of travel.

Under questioning, board members said they were unaware of the extent of McGrath’s travels.

“Were you aware of all these trips and what he was doing out there?” Lam asked. There was no reply.

Board member Michael Harris said so many receipts came in all at once they only received “a cursory review” before  McGrath was reimbursed.

One of his trips was to the Disney Leadership Institute.

The General Assembly is likely to consider a host of changes to MES’s leadership structure and policies when it reconvenes in January.

Lawmakers are likely to strip the executive director of his ability to appoint three members to the board and to impose term limits on board service. They are also likely to require Senate approval for all board members.

The Joint Committee on Fair Practices and State Personnel Oversight cannot subpoena witnesses, Lam said in an interview, but the General Assembly’s Legislative Policy Committee can.

“We need to hear from Mr. McGrath,” he said. “There are enough significant outstanding questions that leadership may be considering that.”