Roy McGrath, chief of staff to Gov. Lawrence J. Hogan Jr. (R), who was under fire for receiving a six-figure payout when he left his job heading a quasi-state agency earlier this year, resigned Monday.

In addition to announcing McGrath’s departure late Monday afternoon, Hogan said that Keiffer J. Mitchell Jr., who serves as the governor’s chief legislative liaison, will fill in as acting chief of staff.

McGrath headed the Maryland Environmental Service, a state-owned business that manages infrastructure projects, for 3 1/2 years, and when he left that agency in the spring to become Hogan’s top aide he received a “severance” payout of about $250,000 — a year’s salary along with other fringe benefits.

The payment, first reported Thursday by The Baltimore Sun, sparked outrage from legislative leaders, who said they would hold a hearing on the severance package. House Speaker Adrienne A. Jones (D-Baltimore County) suggested McGrath return the money.

McGrath initially vowed to stay in his job, posting defiant statements on his personal Facebook page late Friday. But by Monday, in a statement released by the governor’s office, he said he concluded that the controversies had become “unnecessary distractions.” 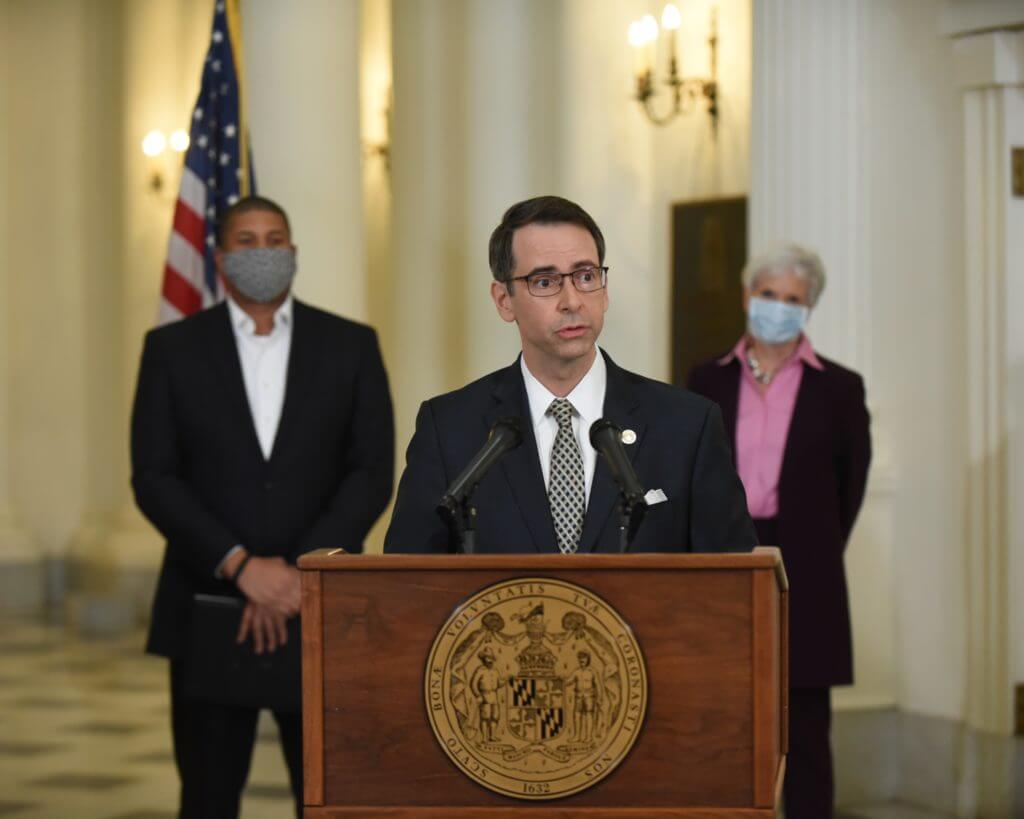 Roy McGrath at a State House news conference earlier this year. Photo by Patrick Siebert/Executive Office of the Governor

“For me, this entire topic is simply the sad politics of personal destruction, and right now, we cannot afford unnecessary distractions from the critical work the governor and his team are doing,” McGrath’s statement said in part. “For this reason, I have advised the governor that I am exiting state service. Most of my career was spent in the private sector, and that’s where I will return.”

In a statement Monday on McGrath’s departure — his first since the controversy first aired in the Sun — Hogan said he was accepting his aide’s suggestion “with regret.”

“Roy has been a deeply valued member of our administration, and our state is better for his dedicated service,” the governor said. “I recognize that this was a difficult decision for Roy, but I understand and respect his reasons for making this decision. I have always known Roy to be someone of the highest character, and I wish him well in his future endeavors.”

In his recently published autobiography, Hogan described McGrath as a master of procurement policy, and praised him for his role in helping secure COVID-19 test kits from a South Korean company. McGrath has long been part of Hogan’s political orbit, dating back to Hogan’s run for Congress against Rep. Steny H. Hoyer (D-Md.) in 1992.

McGrath’s resignation is not going to extinguish the controversy, however. Over the weekend, the co-chairmen of a legislative oversight committee on state personnel matters promised to investigate the six-figure payment and scheduled a hearing for Aug. 25. Sen. Clarence K. Lam (D-Howard), co-chair of the Joint Committee on Fair Practices and State Personnel Oversight, told Maryland Matters Monday that the hearing would proceed as scheduled.

“There remain outstanding questions about the payments to Mr. McGrath and how we got here, and we must continue to investigate,” Senate President Bill Ferguson (D-Baltimore City) said in a statement.

Hogan’s decision to tap Mitchell for the interim chief of staff post should prove popular with the Democratic-led General Assembly, however. Mitchell is a former Democratic lawmaker and Baltimore City councilman who has held a variety of jobs in the Hogan administration, including running his legislative shop for the past year.

Mitchell is part of a storied Baltimore political family. His grandfather, Clarence M. Mitchell Jr., was a national NAACP leader during the Civil Rights era.

“Keiffer is a widely respected leader who has served our administration with distinction since day one. He has a proven track record for bringing people together and working across the aisle, and I thank him for stepping up to serve at this important time,” Hogan said in a statement.

Ferguson concurred: “Keiffer Mitchell is a known bipartisan problem-solver and we look forward to working with him for the people of Maryland,” he said.