Kelly Schulz this week chided her main rival in the Republican gubernatorial primary, state Del. Dan Cox, saying his campaign has been largely devoid of ideas. She said her service in Gov. Lawrence J. Hogan Jr.’s cabinet has taught her that “being a leader” involves “more than rhetoric.”

“Without a plan, without a history of success, without a way of being able to move forward, there is little hope for people to want to vote for you to get something done,” Schulz added.

A former state delegate from Frederick County, Schulz led the departments of Labor and Commerce before stepping down to run for governor. She made her comments during an interview in Baltimore’s Rosemont neighborhood Tuesday, just moments after announcing a plan to fight violent crime.

Schulz pledged to fund a Baltimore Crime Commission made up of “top criminal justice and law enforcement experts from around the state and around the country, if need be.” Schulz said the commission would be directed to craft a violence-reduction plan that she would implement as governor if she determined that city leaders refuse to adopt their own.

She promised to fund “hundreds” of additional police officers along with 25 “elite” prosecutors to pursue “the city’s worst criminals.” Pointing to the spasm of homicides that has gripped the city, Schulz said Baltimore leaders “are failing” their residents.

“This is a crisis that needs immediate action,” she said. “While we need new strategies to deal with crime and we certainly need to put repeat violent offenders behind bars, we also need a renewed effort to bring hope and progress back to neighborhoods just like this.” 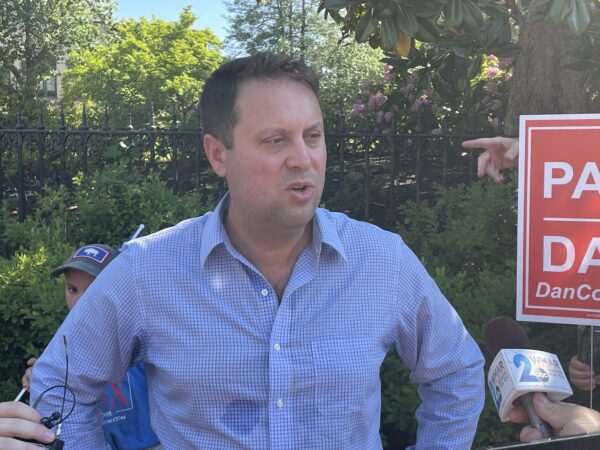 Del. Dan Cox (R-Frederick), a candidate for governor, talks to reporters in Annapolis on June 30. Photo by Bruce DePuyt.

Cox declined to respond to multiple text messages, emails and voicemails left over a two-day period.

A member of the Republican minority in the House of Delegates, the first-term lawmaker has few legislative victories to point to — and his gubernatorial campaign has offered fewer policy rollouts than others.

Speaking at a “tele-rally” on Wednesday evening, Cox said his focus would be on “children, careers and community safety.” He said he would fight “anti-Americanism” in Maryland’s curriculum and he would fight the “degradation” of women’s sports. He also pledged to promote public safety and fight inflation in ways he did not identify.

She said Cox would be “in a tornado” if he wins in November, “not even being able to figure [out] which office is his.”

Cox has been endorsed by former President Trump, who has phoned into two Cox events, including Wednesday’s.

On Wednesday, Trump claimed to have just seen a Maryland gubernatorial poll that he called “very good” for Cox.

The former president assailed Schulz, whom he called “a RINO [Republican in Name Only], just like her boss, Larry Hogan, who locked down your state, destroyed your freedoms and turned his back on the great people of Maryland.” Left unsaid by Trump or Cox were Hogan’s historically high job-approval numbers.

Trump spoke for several minutes about his tenure in the White House.

Schulz and Cox lead a four-candidate field of Republican gubernatorial hopefuls heading into the July 19 primary. Robin Ficker, an anti-tax activist and frequent candidate from Montgomery County, and Joe Werner, an attorney in Baltimore County, are also running.

Polling suggests the battle for the GOP nomination enters the homestretch without a clear frontrunner and with unanswered questions about Trump’s ability to sway voters.

Nearly half of Republican voters polled, 44%, said they were undecided, and 47% could change their mind before Election Day.

Unlike the Democratic primary, which features nine candidates who hold generally similar views, the GOP race has offered a much starker choice.

Schulz supporters were buoyed by an October survey that showed “a Republican like Larry Hogan” prevailing easily over a “progressive Democrat” in a general election.

But the more recent Goucher polling finds that Maryland’s GOP base shares many sympathies with Trump. About 57% of Maryland Republicans said they believed President Joe Biden’s 2020 win was “due to fraud,” despite a lack of evidence, and only 17% of Republicans agreed that the Jan. 6, 2021, attack on the U.S. Capitol was “an insurrection and an attack on democracy.”

Cox has denied the outcome of the 2020 presidential election and tweeted that former Vice President Mike Pence was a “traitor” as a violent mob took over the U.S. Capitol on Jan. 6, 2021. He helped organize buses that brought Trump supporters to D.C. on that day.

Because Maryland is the only state to hold a primary next week, there is a strong chance that national political observers will be watching closely for clues about where the GOP base stands in relation to the disgraced former president.

With Maryland “being by itself, with no other race around, and the tension between Hogan and Trump… it adds a layer of interest,” she said. “There will be some national attention paid to this race,” said Goucher College pollster Mileah Kromer. 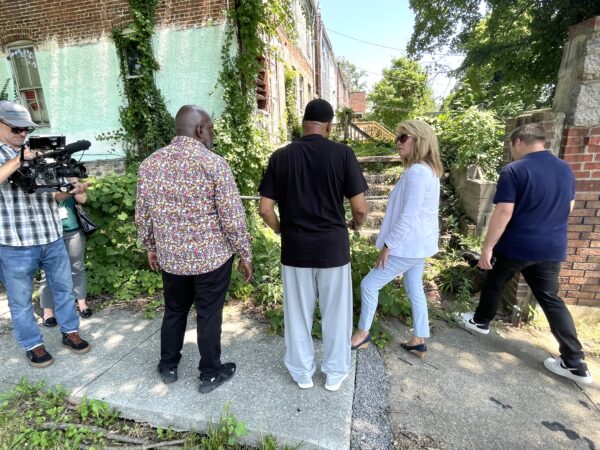 The Schulz camp has filed a formal complaint against the Democratic Governors Association, which is running controversial ads that play up Cox’s conservative bona fides. The spots also label him “too close to Trump.” Schulz has called on her rival to denounce the DGA’s activity, which she has labeled “meddling.”

In an interview outside an early voting center last week, Schulz said Marylanders “want to vote for a governor also that has integrity, right? And, you know, I’m just going to put it on the line right here: My opponent does not have integrity, what he has said and what he has done, I believe, makes him unfit to be governor.”

She said she is the only Republican who can win a statewide election in deep-blue Maryland, an assessment Kromer, the pollster, shared.

“I think that people need to know that I’m the only Republican candidate that can beat a Democrat in November, and that’s why the Democrats are working against me,” Schulz said.

Schulz spoke to reporters on Tuesday outside a small neighborhood church. She was flanked by two community leaders who took her on a tour of the neighborhood.

As she walked around, the community leaders pointed out forlorn housing and overgrown lots, and they discussed the lack of employment opportunities, after-school activities, and quality schools. Schulz shook hands with those she encountered, taped a cell phone interview with a local activist, and purchased a snowball from a street vendor.

Cox has struggled to compete financially with Schulz, whose campaign has benefited from her alliance with Hogan. Cox closed out his online rally with a plea for supports to make their “biggest and best donation, to get us across the finish line.”