If a candidate holds an event to launch his gubernatorial campaign and no press is around to cover it, did it even launch at all?

A Maryland Matters reporter attempted to cover the event at the Sailwinds West Governor’s Hall in Cambridge and was invited inside the banquet hall.

Moments later, a staffer said that only ticketed guests would be allowed inside.

From the parking lot, attendees could be overheard badmouthing a local media outlet.

At one point, an amplified voice reverberated through the closed glass doors, asking donors: “Are there any patriots out there?”

“One of the things that these folks love to do is run against the mainstream media,” Todd Eberly, a political science professor at St. Mary’s College of Maryland, said during a phone interview Friday morning. “Well, the only way you could do that is if you actually have a story that you can point to where you were mentioned, so it is not a wise strategic choice to exclude the press.”

While Cox has been no stranger to controversy in 2021, he’s managed to keep the press at arm’s length.

During a legislative debate on a child mental health care bill, sporting a mask that depicted the Nuremberg Trials held after World War II, he invoked the Holocaust, prompting protest from other lawmakers.

Cox was also present at the Washington, D.C., rally in protest of the election certification on Jan. 6, helped arrange buses to transport constituents there and tweeted that Vice President Mike Pence was “a traitor” as mobs flooded the U.S. Capitol, leading to calls for his expulsion from the General Assembly. 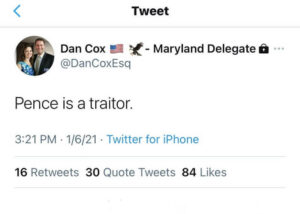 During both controversies, Cox made himself largely unavailable for comment to the media.

Cox, who will round out his first term as a member of the Maryland House of Delegates in 2022, announced his gubernatorial candidacy on the Fourth of July.

“Today, this 4th July 2021, I am stepping up to run to be your next Governor of Maryland to restore Freedom to the Free State,” Cox wrote in his campaign announcement on Facebook.

Since the early days of the pandemic, Cox has railed against decisions made by Gov. Lawrence J. Hogan Jr. (R) and sponsored a resolution to end the state of emergency during the 2021 legislative session, saying Hogan’s policy represented “tyranny.” 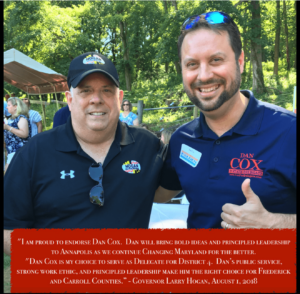 Demonstrating clear division in the Maryland GOP, Hogan has called Cox a “QAnon conspiracy theorist who says crazy things every day,” and alleged that he didn’t know who he is.

Eberly called Hogan “the antitheses” of Trump Republicans like Cox, and while they both poll well among the state’s Republicans, Trump and Hogan “are two very, very different types of Republican.”

And, though they have the same ideology, Eberly said that Trump and Cox are very different candidates: one is a very rich, well-known television personality; “the other isn’t.”

Another glaring difference: the former president, though he protests, loves attention from the media.

Eberly said it’s still too early in his campaign to know if Cox will gain any traction in the GOP primary, and if he doesn’t he’ll be branded a “novelty candidate.”

But if Cox figures out how to make a big name of himself, Eberly continued, “he will be a major pain in the butt for the Republican Party in the state.”

“If you want to elect Democrats in Maryland to every seat, you run a candidate like Dan Cox statewide,” he said.