Frustrations boiled over at the start of an education reform meeting in Annapolis on Thursday, following Republican Gov. Lawrence J. Hogan Jr.’s earlier comments that the commission’s initial legislation was “half-baked.”

William E. “Brit” Kirwan, chairman of the Commission on Innovation and Excellence, which has recommended top-to-bottom education K-12 education reforms in the state, called Hogan’s statement “unfair” and “demeaning” at a meeting of officials plotting a funding formula to cover the pricey reforms.

Kirwan ran down some of the commission’s recommendations – to elevate the status of the teaching profession, provide extra supports to low-income students and expand early education programs.

“This is the plan Gov. Hogan said the commission advanced with little thought. Fortunately, he seems to be alone in that view,” Kirwan said, noting that the Senate unanimously supported the legislation and that House members overwhelmingly advanced it.

Hogan, in his closing address at the Maryland Association of Counties summer conference last week, said the commission and legislators had hurtled forward with initial education reform measures that are estimated to eventually cost up to $3.8 billion annually without identifying a long-term funding source first.

Hogan also recited a set of statistics his administration often refers to: that funding the Kirwan Commission proposals would require a 39% increase in the personal income tax, an 89% hike in the sales tax, or a 535% boost in property taxes. Hogan vowed that such increases would never happen so long as he’s governor.

But during a meeting of the funding workgroup Thursday, Kirwan pushed back against such figures, “which we would never do, of course.”

It’s extraordinarily unlikely that the state would find funding for education reforms exclusively from one tax or another, which is how the eye-popping Hogan administration figures are calculated. However, the commission is open to recommendations about blunting the cost hikes for counties and for the state, Kirwan said.

Other officials in Maryland have made recommendations to alter the commission’s plans, including extending an implementation timeline, or adding “triggers” to the funding scheme to provide funding at certain milestones.

Budget Secretary David R. Brinkley, though, defended the governor’s comments. He said officials angered by the speech were focused on a few words, and not the overall substance, which was “right on.” 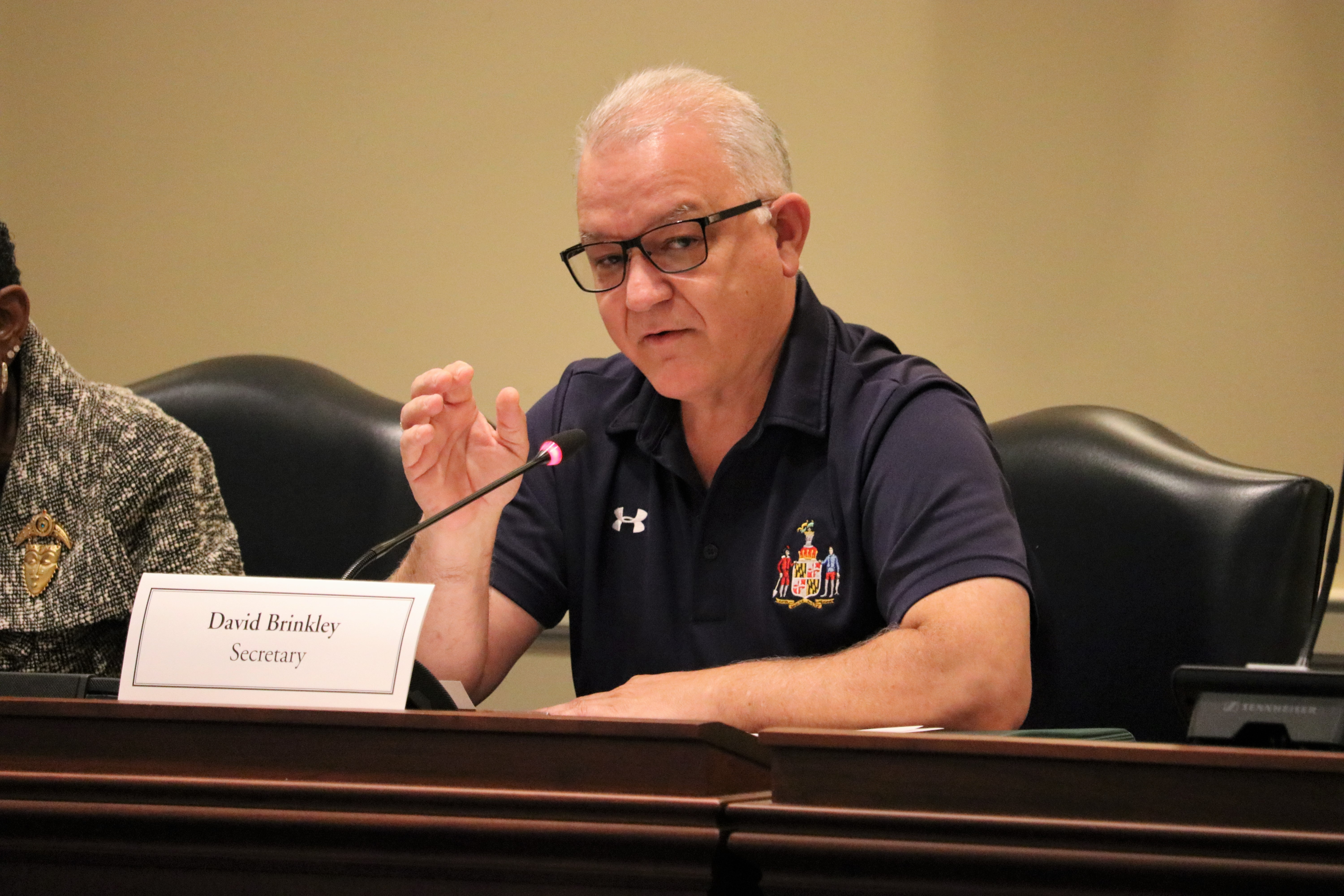 Because the funding workgroup is still working out details on who should pay what and when, the public has not been given good and fair warning about the reform effort’s costs, Brinkley said.

“We don’t know where we’re getting the revenues from, we don’t know what the priorities are going to be, and the counties don’t have the answer on what their portion is. …The fact of the matter is, this isn’t done. By definition, that could be a half-baked cake.”

He also argued that Hogan has “been a good partner” by allowing the legislation to take effect without his signature and releasing funding the General Assembly restricted for Kirwan priorities.

“But there is a great deal of hope in the work that we have done, and we are committed to Maryland’s children moving forward,” she said. “…We have to adopt these recommendations, fund them and implement them.”

Sen. Bill Ferguson (D-Baltimore City) said it was difficult to convey the level of anger and frustration he felt over the weekend after reading the governor’s comments.

“All of us in this room have the capacity and the capability to have reasonable conversations and this is a moment where I invite the governor to please, be a part of a solution,” Ferguson said. “This is an incredibly important moment in Maryland and for the entire country. We solve and get through this crisis by working together. …This is something the people of Maryland want us to do and I urge the administration to reconsider its approach.”

Kata Hall, a spokeswoman for Hogan, took a swipe at some of the lawmakers on the Kirwan Commission, accusing them of launching partisan attacks against the governor.

“We have heard nothing today from partisan legislators to suggest that they have a real plan, a strategy, or even an inkling of how to fund the Kirwan blueprint,” she said. “They clearly resent the fact that Governor Hogan is the only one being honest with Marylanders about the true price tag.”

Hall said Hogan was determined to continue to sound the alarm about the costs associated with the Kirwan plan, “even if it means some bruised egos along the way.”

Harford County Executive Barry Glassman (R), who has suggested a longer implementation timeline to help counties cope with increasing costs, said county leaders are deeply concerned with coming up with their share of the increased costs, which still hasn’t been determined.

“Maryland county leaders are concerned – rich counties, poor counties and those of us in between. We are really concerned about the implications of some of the fiscal discussions that we’ve had,” Glassman said Thursday. “But, Mr. Chairman, we are ready to get down to work and get to the nitty-gritty.”

The workgroup hopes to finalize a funding formula to present to the full Kirwan Commission this fall.