Speaking at the close of the Maryland Association of Counties summer conference in Ocean City, where how to pay for the recommendations of the so-called Kirwan Commission to boost public education has been a hot topic, Hogan faulted the legislature for advancing “well-meaning but half-baked, fiscally irresponsible” proposals that could bankrupt the state.

Hogan said fully funding the costs of the Kirwan blueprint, estimated at about $4 billion – half of which would be borne by the counties, half from the state – would require a 39% increase in the personal income tax, an 89% hike in the sales tax, and a 535% boost in property taxes. The plan would create an $18 billion state deficit, he said, and “a bruising” $6,200 tax hike for the average Maryland family over the next five years.

“Not a single one of these things is ever going to happen while I’m governor of the state of Maryland,” Hogan asserted, pointing to $32 billion in investments in K-12 education during his 4 ½-year tenure.

“His position on education funding has been fairly consistent, that he will fund whatever we appropriate, but he’s not going to take any leadership on it,” Rosapepe said. “That’s not news.”

Montgomery County Executive Marc B. Elrich (D), who presides over the county with the largest student population in the state, said Hogan’s remarks were “not surprising.”

But Harford County Executive Barry Glassman (R) – the current MACo president – said Hogan’s warnings gibed with the sober fiscal realities many county and state officials had been discussing at the conference this week. Glassman suggested Kirwan’s recommendations – and their associated costs – may need to be phased in over a longer period than the decade Democratic legislative leaders envision.

“It’s well meaning,” he said of the Kirwan plan. “But the fiscal ramifications may be beyond the realm of what’s realistic.” 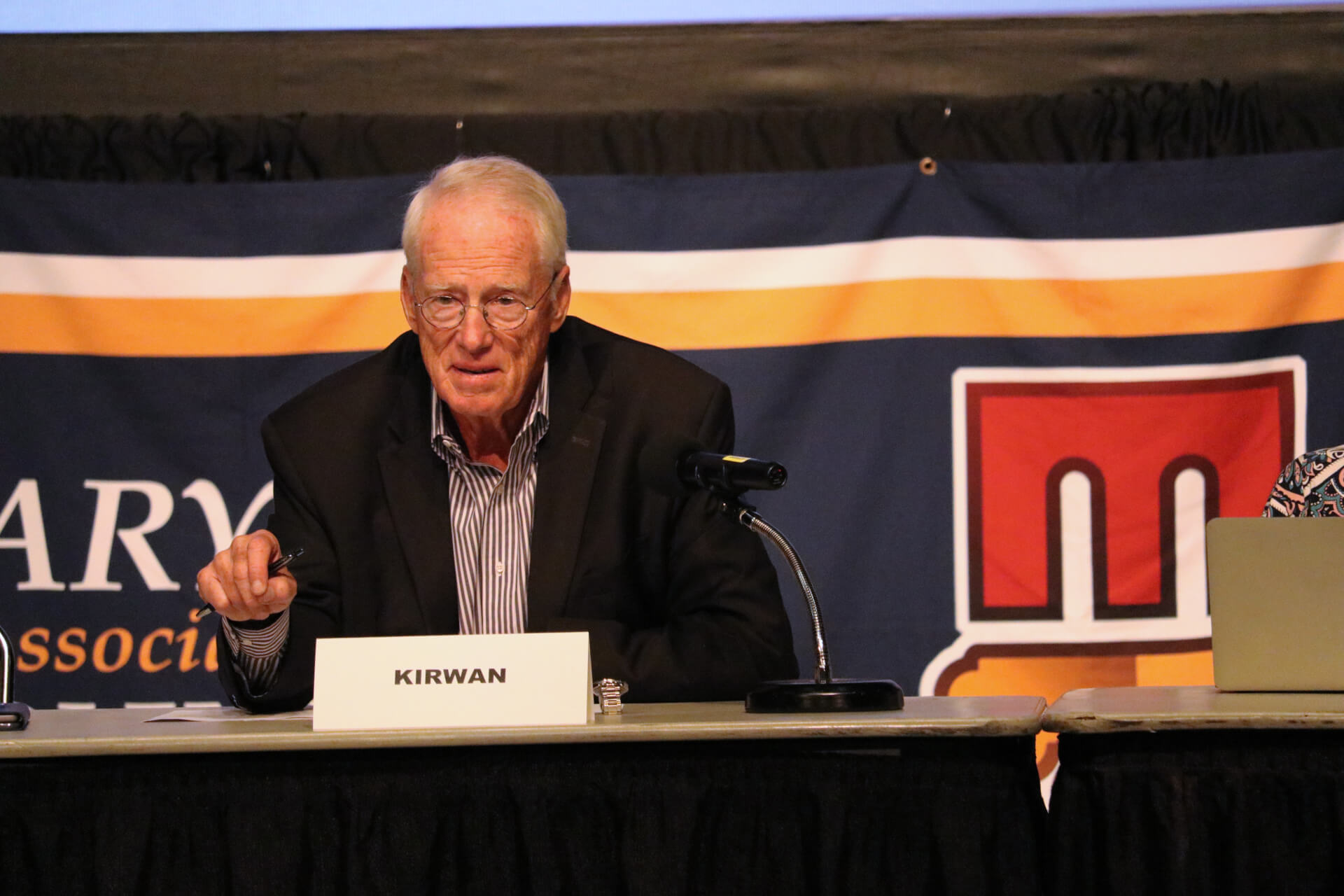 William “Brit” Kirwan, chairman of the Commission on Innovation and Excellence in Education, at the Maryland Association of Counties summer conference. Photo by Danielle E. Gaines.

State Sen. Andrew Serafini (R-Washington) noted that some counties passed tax increases this year to deal with funding shortfalls before they’ve even had to consider Kirwan obligations.

“We do not want to disrespect the work of the Kirwan Commission and Dr. [William E.] Kirwan and a lot of people who have put a lot of time in,” he said. “It’s just the economic realities are really challenging.”

On another education funding front, Hogan said he planned to reintroduce his proposal to dedicate an additional $2 billion from the state capital budget to school construction during next year’s legislative session.

“This will fulfill nearly every single local construction request in the entire state,” Hogan said. “The time has come to pass this critical much-needed initiative.”

While Hogan’s plan ran aground in the legislature this year, new House Speaker Adrienne A. Jones (D-Baltimore County) has made school construction her top priority for the upcoming session.

“Whether exactly they mesh remains to be seen,” Hogan’s budget secretary, David R. Brinkley, said Saturday. “At least we have grounds to have the conversation.”

During his speech, Hogan also said the state would spend $10 million this year on rural broadband access this year, part of a new, decade-long initiative to spend $100 million to provide an additional 225,000 with high-speed affordable Internet service. This new spending program comes as Hogan continues to hold more than $100 million that the legislature had set aside for more than three dozen budget priorities, including increased spending on school construction, a fund to help police agencies test more rape evidence kits, and grants to the state’s attorney’s offices in Baltimore City and Prince George’s County for crime fighting initiatives.

Hogan also continued to his push for proposals to address violent crime in Baltimore City, including legislation designed to remove repeat violent offenders from the streets.

“Nearly all of the initiatives that are currently being debated in other states, and in Washington, have already been enacted here in Maryland,” he said. “But none of that has stopped the murders and the violence… I am calling on leaders at every level of government to join our efforts to impose tougher sentences for those who repeatedly commit these violent crimes. Enough is enough. Let’s come together and do what it takes to get these violent shooters off our streets once and for all.”

Hogan also talked about the state’s opioid crisis, environmental initiatives, transportation projects, and his plans to highlight what’s working in Maryland during his year-long tenure as chairman of the National Governors Association.