With just seven weeks to go before he leaves office, Gov. Larry Hogan (R) tantalized a throng of supporters on Wednesday evening, declaring — in one of two campaign-style videos — that his two terms as governor are “just the beginning” of his political journey.

The state’s popular and term-limited chief executive stopped short of announcing a 2024 bid for the White House and he insisted that he has not made any decisions about his future. But his twin fundraisers at Maryland Live! Casino and Hotel in Hanover, one of them a glittery reception, appeared crafted to push open the door of possibilities at least a little.

“I think you all know that I do care very deeply about this country and I’ve never been more concerned about the direction of our nation,” Hogan declared. “What I can tell you tonight is that I am not about to give up on the Republican Party or on America.”

The crowd of perhaps 1,200 people roared its approval.

Hogan entered the hall following the most glowing introduction imaginable.

“Please welcome America’s most popular governor and the most successful governor in Maryland’s history, Gov. Larry Hogan,” an announcer shouted.

Wearing a wireless mic as he wandered the stage, with what appeared to be a TelePrompter-style device positioned before him, Hogan played up his long history as an underdog.

The Hogan hype machine was in overdrive, his brief remarks sandwiched between two slick videos touting the governor’s leadership abilities: The first traced the now-familiar arc of the last eight years — “the 43 consecutive tax increases” enacted by his predecessor; the takeover of the government response to the unrest in Baltimore following the death of Freddie Gray; a successful and very public battle against an often-fatal form of cancer; his by-most-accounts stellar response to the COVID-19 pandemic; the use of Maryland National Guard personnel to help quell the Jan. 6 insurrection at the U.S. Capitol; and his emergence as a leading GOP critic of President Trump.

The second was more of a look ahead to Hogan’s desire to remain relevant in the conversation about the nation’s political future. It featured quick but not so subtle footage of Hogan at the Iowa State Fair last summer and of the late President Reagan, a personal hero of Hogan’s, on a TV screen, saluting.

“This is just the beginning,” the second video concluded, in the most tantalizing messaging of the evening.

Moments later, the first song the band played after Hogan and his wife Yumi and Lt. Gov. Boyd Rutherford (R) and his wife Monica waved to the crowd, was Sam and Dave’s iconic “Hold on, I’m Coming” — another not so subtle message. Confetti fell from both sides of the stage.

Although he has governed alongside a General Assembly where Democrats were routinely able to override his policy vetoes, Hogan has enjoyed historically high job-approval ratings since taking office. Voters in a reliably blue state gave him substantial victories in 2014 and 2018 and may well have awarded him a third term if state law allowed it.

Hogan told supporters that the style of leadership he has used in Annapolis could easily be replicated elsewhere. “If we can do that here in Maryland, then there’s no place in America where these very same principles would not succeed,” he said.

Hogan’s remarks come at a time of increased national visibility for the one-time real estate developer. He has travelled the country, hitting early presidential nominating states like Iowa and New Hampshire, giving speeches, and contributing to political campaigns. The host of an issues and ideas forum in Annapolis on Wednesday morning, Hogan has emerged as a fixture on Sunday morning talk shows.

The two events held at Live! on Wednesday — a “VIP” reception and a larger “celebration” of his governorship — were intended to raise funds for his political organizations, An American United and a relatively new federal political action committee called Better Path Forward PAC.

By Hogan’s reckoning, there were 1,700 people present, though the crowd size seemed a little smaller. David Weinman, who heads An America United, said the governor has raised about $1.2 million for the two entities since announcing the Wednesday night fundraising events earlier in the fall.

Hogan later told reporters that his supporters have given him and his team “1.2 million reasons” to consider launching a national campaign. 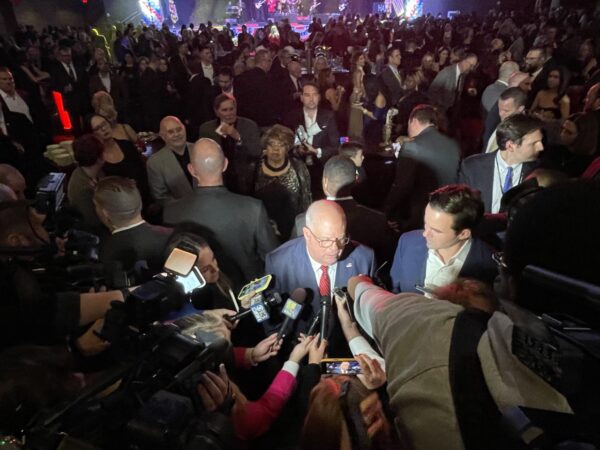 Gov. Larry Hogan (R) meets the press during his political fundraiser Wednesday evening. Robert Costa, the national political reporter of CBS News, is on the right. Photo by Bruce DePuyt.

The crowd was a mix of business leaders, Hogan administration officials past and present, the remnants of the Hogan wing of the Maryland Republican Party, some Democrats, the usual Maryland political hangers-on, and the few Annapolis lobbyists with personal ties to Hogan or who still have reason to pay tribute (most of the transactional Annapolis lobbying crowd has already moved on to Gov.-elect Wes Moore, a Democrat). As is often the case at Hogan events, it was a more racially diverse crowd than most Republican leaders attract.

Hogan’s videos show that more than eight years after his first electoral victory, and 7 1/2 years after the unrest in Baltimore, Hogan is still campaigning against former Gov. Martin O’Malley (D) for the state of the Maryland economy when he left office, and former Baltimore Mayor Stephanie Rawlings-Blake (D), who, as Hogan describes it, was prepared to be lenient with potential rioters.

Jaymi Sterling, Hogan’s step-daughter, who was just elected state’s attorney in St. Mary’s County, figured prominently in the first video, talking about how “relatable” her dad is to everyday Marylanders. It’s clear that Sterling’s political success is a source of great pride for Hogan. And it’s equally clear that she could be a rising star in the state GOP, depending on what direction party leaders decide to take following the wipeout of Del. Dan Cox (R-Frederick), the Trump-endorsed candidate, in the gubernatorial election.

Hogan continues to be one of the few elected Republicans in the U.S. willing to openly criticize the former president.

After making his way through hundreds of well-wishers, Hogan moved to the back of the room for what’s known as a press gaggle. The music from the very talented R&B band was deafening, and bodyguards formed a semi- circle behind Hogan’s back, cutting off access for many of the reporters straining to hear what he was trying to say.

While a handful of Maryland political reporters were effectively shut out of the conversation, standing in close proximity to Hogan, and absorbing the governor’s every word, was Robert Costa, the CBS news national political reporter formerly of The Washington Post and National Review. It seemed a fitting metaphor for Hogan’s political and media strategy for the future.

“We need to stop talking about Donald Trump,” he told reporters Wednesday night. “The party and the country need to move on from him.”