Rep. Jamie Raskin (D-Md.) made it official on Friday and confirmed that he’s seeking to become chair of the U.S. House Committee on Oversight and Reform.

Raskin sent a letter to colleagues in the House Democratic Caucus asking for support of his bid to lead the powerful panel, where he is currently chair of the Subcommittee on Civil Rights and Civil Liberties.

Multiple Democrats are jockeying to become the top Democrat on the panel after current chair, Rep. Carolyn Maloney (D-New York), was defeated in her primary election earlier this week.

“I am grateful to Carolyn Maloney for her leadership of the Committee during the most thoroughgoing assault on American democratic institutions in more than a century,” Raskin wrote in the letter. “And we will all strive to continue her spirited defense of reproductive freedom and equal rights along with her commitment to a fair Census, a strong Post Office and justice for 9/11 first responders.”

Maloney has held the committee gavel since the death of the late Maryland Congressman Elijah Cummings (D) in 2019.

It was Cummings who recruited Raskin to the committee and named him chair of the subcommittee.

“[I]t is still hard for me to express the awesome sense of responsibility (and gratitude) that his appointment to this key position imbued in me,” Raskin wrote to his colleagues.

Raskin is also active on other issues of particular interest to the committee, including postal service reform, reproductive rights, statehood for Washington, D.C., and voter suppression.

Raskin also wrote that the committee’s work could be a critical benefit as Democrats continue to fight for a majority in the next Congress.

“The Oversight and Reform Committee has expansive power to speak to America in a concise and dramatic way about the continuing peril presented by the autocrats, the kleptocrats and the theocrats,” Raskin wrote. “We must use every new technique of investigative research, communication, and social media to galvanize public opinion in our campaign to defend strong democracy and effective government in America.”

Other aspirants for the top committee position include Rep. Stephen Lynch (D-Mass.) and Rep. Gerry Connolly (D-Va.). Both have considerably more seniority on the committee and in Congress, but that will only be one of the factors Democrats will consider as they decide who to make their top representative on the Oversight panel. If Democrats lose the House majority in the November election, the three members would be competing for the right to be ranking member of the committee.

More labor unions are moving to the Wes Moore camp after backing his rival Tom Perez in the Democratic primary for governor.

Lisa Brown, executive vice president of 1199SEIU United Healthcare Workers East, said Moore “has a great track record as a leader in the nonprofit and private sectors and will bring that experience to the State House in Annapolis.”

Moore said several members of his family have been union members over the generations, and that his father’s union aided the Moore family after his father died.

“Every Marylander deserves the opportunity to have a quality, good-paying job and the ability to join a union — that’s why I’m fighting to raise wages and build up our unions here in Maryland,” said Moore, who joined union members in Baltimore on Friday. “For nearly 50 years, SEIU has been fighting for working families here in Maryland and I’m honored to have their support.”

“Wes Moore and [his running mate] Aruna Miller bring diverse experiences to the leadership of our state and know that unions improve wages and benefits for all workers, reduce income inequality and strengthen our democracy,” said Donna Edwards, the chapter president.

Maryland State and D.C. AFL-CIO represents over 250,000 union members in Maryland in over 600 affiliated local unions in a wide variety of sectors.

Edwards and AFL-CIO International President Liz Shuler were among the VIPs on hand for the big Democratic rally in Rockville on Thursday night that was headlined by President Biden.

Franchot: Lierman will ‘do just as good a job as I did’

Just as unions getting behind Moore after the Democratic primary isn’t terribly surprising, it isn’t a shock that outgoing Comptroller Peter Franchot (D) has endorsed the Democratic nominee to replace him, Del. Brooke Lierman, in November. Still, Franchot’s endorsement, delivered in a 50-second video released earlier this week, was notably effusive.

Franchot and Lierman taped the video on the Ocean City boardwalk, presumably last week while both were attending the Maryland Association of Counties conference. 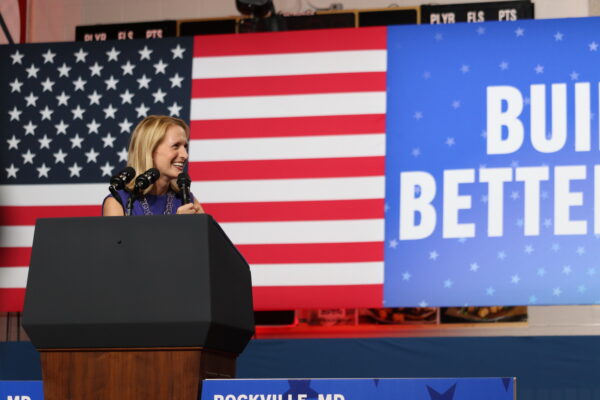 “How great is it that I’m able to deliver a well-run agency that everyone respects, not just in Maryland but across the country, to someone like Brooke who can take it to new levels of creativity and vision,” the four-term comptroller says. “We specialize in customer service in the comptroller’s office — respect the taxpayer, respond to the taxpayer, get results for the taxpayer. I have complete confidence that from day one, Brooke Lierman is going to do just as good a job as I did.”

Franchot also pointed out that if elected, Lierman would be the first woman to serve as comptroller.

“Agriculture is Maryland’s largest industry,” he said. “We need elected officials at the state level who will be a voice for farmers, who understand the concerns of our farming community, and the role of agriculture in protecting our environment and the Chesapeake Bay. As Comptroller, I’ll always help protect Maryland agriculture and the businesses it supports.”

Campaigning in the bus lane

Anne Arundel County Councilmember Jessica Haire, the Republican nominee for county executive, blasted county officials for their announcement this week that the school system has a dramatic shortage in school bus drivers, and proposed short-term solutions for getting kids who might otherwise be stranded to school.

“The message sent this week from Anne Arundel County Public Schools that many buses will not be available to families and students this year is unacceptable but hardly surprising at this point,” Haire said Friday. “This is a solvable issue, but it requires a hands-on, proactive approach.”

Haire said that while continuing to recruit new drivers, the county “should be considering shorter routes and contracting vans instead of buses. We should be encouraging groups of parents to help organize carpools and offering financial incentives to do so. We should be considering rolling outages on a predictable schedule so families can plan ahead. Every option should be on the table that doesn’t leave students and parents stranded on the first day of school.”

“Telling parents and families they have no transportation,” Haire added, “is not a solution.”