Fresh from a series of policy wins, President Joe Biden kicked off the general election campaign season Thursday night with a well-attended rally at Richard Montgomery High School in Rockville.

“Let me state the obvious, there’s a lot at stake in this election,” Biden told the crowd of more than 2,400 in the school gymnasium.

Moore sat on stage with Biden during the president’s speech.

After being introduced by Moore, Biden opened his 29-minute speech with generous remarks about several Maryland Democrats who had spoken before him, sprinkled with some good-natured ribbing.

“Wes is the real deal. Folks, he is a combat veteran. The only drawback is, he’s a Rhodes Scholar.” 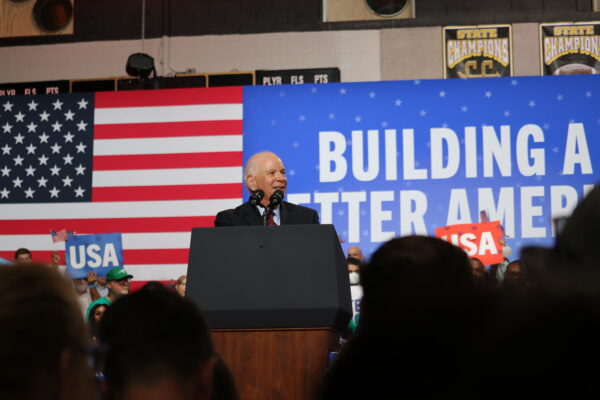 Speaking of Maryland’s U.S. senators, Ben Cardin and Chris Van Hollen, Biden told the crowd, “You have literally two of the best senators in the United States.”

“They’re strong and principled and effective,” he said. “Keep them. You need them. No, I need them.”

Biden turned next to the two members of the House of Representatives who spoke, House Majority Leader Steny Hoyer and Jamie Raskin.

“Steny Hoyer, he’s been my friend for a long time. And how about that Jamie Raskin? He’s done an incredible job coming out of tragic circumstances for his family.”

A long list of party celebrities and statewide candidates served as warm-up acts to Biden, offering many of the same talking points about Democratic accomplishments of the past 18 months — the recently passed Inflation Reduction Act, bipartisan infrastructure act, gun reform laws — and drew contrasts with the Republican party under the influence of former President Donald Trump.

Some of the loudest bouts of applause throughout the night were for Biden’s student debt relief plan announced earlier in the week.

Biden promised the crowd that if Democrats win a majority in Congress, he would codify the rights once guaranteed by Roe v. Wade and said “I’m going to ban assault weapons in this country.”

“Were going to do it for your kids. Who are going to learn how to read and write in school, instead of duck and cover,” Biden said. 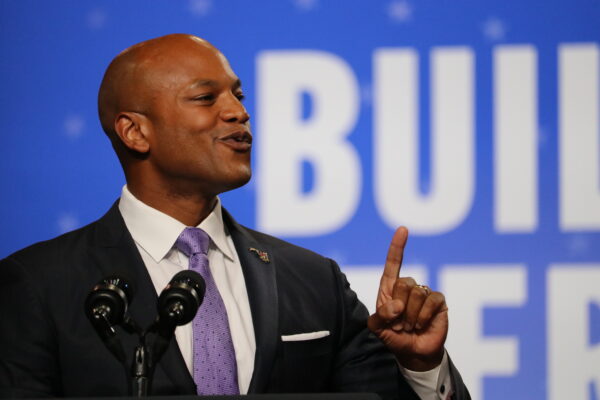 But the Democratic luminaries also stressed that they would not take anything for granted in the upcoming general election.

“Ever since our primary win, it’s amazing how many people have come up and said: ‘Isn’t it great that Dan Cox won? You’re running against Dan Cox in the general,’” Moore told the crowd. “My answer is clear and it is consistent: Do not underestimate what we’re up against.”

Moore continued: “It is not ‘great’ that come November we are running against an election denier,” Moore said. “For me, patriotism meant leaving my family and putting on my country’s uniform and serving with the 82nd Airborne in Afghanistan. …But let’s be clear, for our opponent, patriotism for him means organizing buses to join him on January 6th.”

The emotional crest of the 2 1/2 long program was delivered by Raskin, long a folk hero in his Montgomery County-based district but rapidly becoming a national progressive icon due to his regular prosecution of the legal and political cases against Trump and his defense of U.S. democracy. 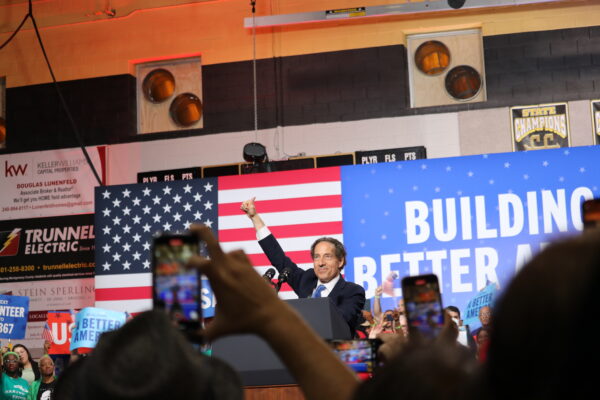 To wild cheers and applause, Raskin sought to delineate the differences between Democrats and Republicans, name-checking Thomas Jefferson, Franklin and Eleanor Roosevelt, John Lewis, “the great Elijah Cummings,” and “the last great Republican president, Abraham Lincoln” along the way.

He ended his speech by quoting Frederick Douglass and Thomas Paine.

“Tyranny, like hell, is not easily conquered,” Raskin said. “…The more difficult the struggle, the more glorious the end.”

Hoyer, known over his 55 years in Maryland politics for his long and passionate speeches, lamented having to follow Raskin on the program.

“These are the times that try Steny Hoyer’s soul, going after Jamie Raskin,” he quipped.

Maryland Republicans and conservatives had hoped to use Biden’s appearance in Rockville for some counter-programming – and to publicize their own agenda.

But it didn’t entirely work out as planned.

Del. Dan Cox (R-Frederick), the GOP nominee for governor, had scheduled a news conference for Thursday afternoon outside the Montgomery County Circuit Courthouse in Rockville, just a few blocks from where the Democratic rally was taking place, but he abruptly canceled about two hours beforehand and issued a statement instead.

Promises of a large protest from the conservative group Help Save Maryland also did not appear to materialize. No demonstrators could be seen around the vast perimeter of Richard Montgomery High School for the 90 minutes leading up to the Democratic rally. Three separate Democratic operatives reported seeing two teenaged boys near the premises earlier in the day, one with a “Let’s Go Brandon” banner – a coded epithet for Biden – and the other wearing a “Reagan ‘84” T-shirt. 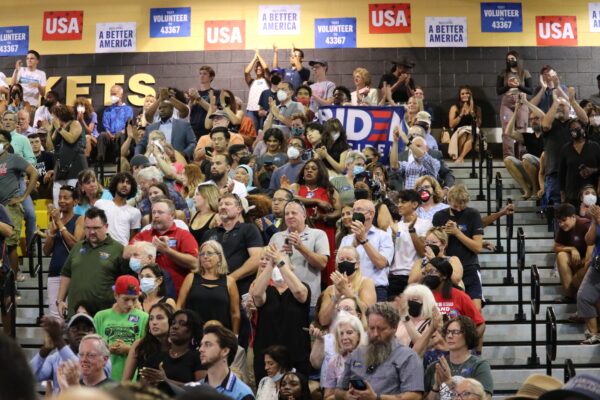 “We’re here to discuss the costly failures of Joe Biden and Democrats like David Trone,” Parrott said at the top of his 20-minute presentation. “He can’t run away from his 100% voting record where he’s supported the Biden policies and Nancy Pelosi’s policies.”

Parrott, who lost to Trone by 20 points in 2020 but has a considerably better chance of winning this time thanks to new congressional district lines and a more favorable national political climate for the GOP, used the forum to discuss his life and career in politics and as a traffic engineer.

Parrott criticized Democratic programs for contributing to the nation’s high inflation rate, but mostly pledged to bring “good government policies” to Congress. He highlighted his work to defeat Democratic gerrymandering attempts in Maryland.

Parrott also accused Trone of being out of touch with his district, which takes in a piece of western Montgomery County and then extends west to Frederick, Washington, Allegany and Garrett counties.

“I’ve focused on my constituents,” he said. “My opponent votes in a partisan manner…Trone is totally supporting President Biden. Trone doesn’t live inside the district. He’s a D.C. insider. I live right in the center of the district, in Hagerstown.”

Parrott urged reporters who were listening in to pay attention to his race.

“As you’re following this election, you’re going to see that it’s close,” he said. “People want good government. They want more money in their pockets.”

In his statement, Cox sought to tie Moore to unpopular Biden policies.

“I will win this November and vigorously serve the people of Maryland as governor because the failed policies of the Biden Administration which Wes Moore is praising, advancing and will implement are disastrous for Maryland,” he said. “This could not be better highlighted as it is today with President Joe Biden’s visit to Richard Montgomery High School to campaign for Wes Moore in-person while Wes Moore appears to be avoiding in-person debates with me.”

Cox also made reference to past COVID-19 public health protocols, a staple of his campaign stump speeches.

“The people of Maryland want their freedom back.  We want our state back.  I will work hard and will implement the constitutional and pro-freedom policies that Marylanders want and deserve.”

Biden’s speech was briefly interrupted by a protester who attempted to shout at the president about the stolen 2020 election but he was quickly shouted down by the crowd and removed from the high school gymnasium.

The heckler was quickly escorted out. He was wearing a suit and as he was being removed he held up two fingers on each hand in a “V,” Nixon-style, and took a brief bow.

For hours before the rally, traffic snarled in downtown Rockville, with a massive line of wannabe attendees circling the high school property.

More than 2,400 people crammed into the school’s gymnasium, with nearly 1,300 others in overflow spaces in the school’s cafeteria and auditorium. 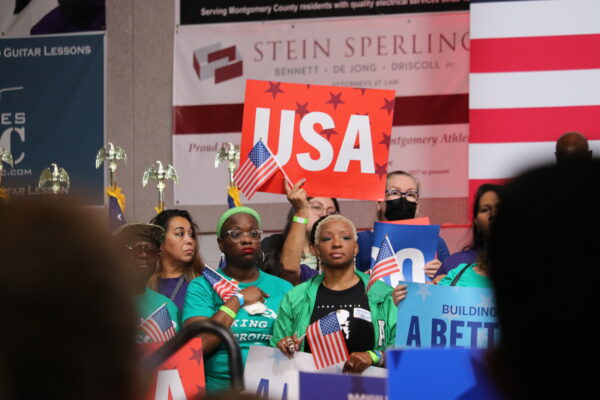 Supporters stand behind Democratic candidates at a rally in Rockville on Thursday. Photo by Danielle E. Gaines.

Before heading to the main event, Biden briefly appeared in both overflow rooms to greet supporters.

When Biden walked onto the stage in the school’s auditorium, the surprised crowd of several hundred stood up and cheered, according to a pool report.

“The good news of being in an overflow room is you can leave when I start to speak,” Biden told the crowd, which he addressed for about four minutes.

In the cafeteria, Biden posed for a group photo with the crowd, bending down so everybody could fit in the frame. He took three photos with different parts of the crowd behind him.

On the way to the rally, Biden stopped at a fundraiser at a private home in Bethesda. About 100 people were on hand and the event was expected to raise $1 million for the Democratic National Committee and the Democratic Grassroots Victory Fund.

He told the crowd gathered that he “underestimated how much damage the previous four years had done in terms of America’s reputation in the world” and that the party has “got to win” in November.