Two cabinet nominations put forward by Gov. Lawrence J. Hogan Jr. were approved by a Senate panel on Monday — and lawmakers moved along several nominations to serve on the board of the Maryland Environmental Service, a quasi-governmental body whose leadership has been called into question.

But in a surprise move, the committee put off consideration of James F. Ports Jr., Hogan’s pick to serve as transportation secretary. The governor selected Ports, a Republican former state lawmaker, to fill the post vacated last month when Greg Slater stepped down to take the reins at the Tampa Hillsborough Expressway Authority. Ports served until recently as executive director of the Maryland Transportation Authority (MDTA).

It could not immediately be learned why the committee passed on Ports. During the hearing on his nomination, lawmakers from both parties praised him. Sen. James C. Rosapepe (D-Prince George’s) said that although the two had philosophical differences during their tenure in the House of Delegates, “I’ve always found him to be working in the public interest. … I think he can be a great secretary.”

The MDTA has been beset by issues related to the state’s E-ZPass system, and Clarence K. Lam (D-Howard) accused Ports of refusing to acknowledge problems with the state’s tolling system, despite a torrent of complaints from motorists. “I have a lot of reservations with your approach, your openness and even transparency,” Lam said. 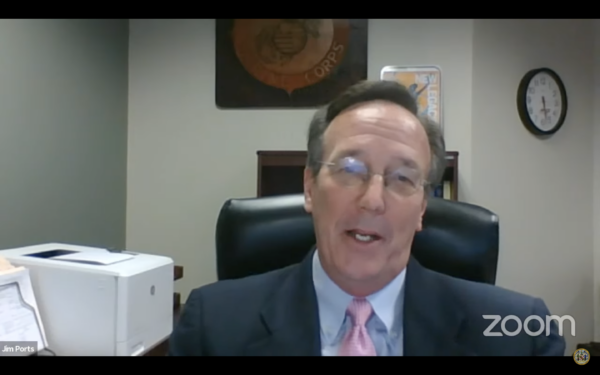 Ports acknowledged that he and Democrats in the legislature may disagree, but he pledged to be “open and honest.” According to a source familiar with discussions held prior to the hearing, Ports was made aware that his nomination might be delayed one week.

If ultimately confirmed, Ports will take over at a crucial time. MDOT will be in court next week, defending its decision to select Accelerate Maryland Partners, a consortium made up of Transurban and a second Australian firm, to design — and perhaps build — variably-priced toll lanes on two highways in Montgomery County. A losing bidder has accused the agency of twisting its procurement process to benefit AM Partners.

Ports would also inherit a Purple Line project that ran off the rails more than a year ago when the prime subcontractor walked off the job in a cost dispute. State officials recently approved a contract — with a $3 billion cost increase — to bring on a newly-formed consortium to complete the light rail line that would run between New Carrollton and Bethesda.

Lawmakers unanimously advanced the nomination of R. Michael Gill to run the Department of Commerce and they signed-off on Russell J. Strickland, Hogan’s choice to lead the Department of Emergency Management. Gill’s confirmation marks his return to an agency he led from 2015 until 2019. He takes the post held until last month by gubernatorial hopeful Kelly M. Schulz, who resigned to campaign full-time. Strickland has been executive director at the predecessor Maryland Emergency Management Agency since 2015.

In addition, the committee approved nominees for two non-cabinet posts, Annie Harvey to serve as corrections commissioner and Michael C. Zimmerman to become the state’s top procurement official. Lawmakers heaped praise on Harvey, a former top corrections official in North Carolina who rose through the ranks during a 30-year career there. Zimmerman acknowledged that the state’s utilization of minority-owned firms frequently falls short of its goals and he pledged a renewed push to help small, minority-owned and female-headed companies compete for state contracts.

The nominations approved on Monday move to the full Senate for consideration there.

Other actions taken by the Committee on Executive Nominations on Monday: