For four hours Roy McGrath responded to questions from a General Assembly oversight committee on Wednesday.

But Gov. Lawrence J. Hogan Jr.’s former chief of staff shed little light on a controversial severance payout he received when left his prior post, at the Maryland Environmental Service, to run the administration.

For months McGrath has insisted that Hogan (R) “anticipated” that he would receive a year’s severance when he left MES in May, a claim the governor has flatly denied.

Democrats in the legislature have sought to resolve that conflict. Asked on Wednesday what the governor knew and when, McGrath declined to say. The hearing was held via Zoom, and McGrath’s attorney, veteran defense counsel Bruce L. Marcus, sat at his side.

Although he answered some of the questions put to him by the Joint Committee on Fair Practices and State Personnel Oversight, McGrath invoked his Fifth Amendment rights against self-incrimination more than 170 times.

His appearance before the panel marked his first public comments since news of the payout broke in August. He agreed to testify only after lawmakers issued subpoenas, their first in nearly a generation.

Despite McGrath’s general unwillingness to answer questions from the panel’s outside counsel, Ward B. Coe, the blizzard of receipts, expense documents, emails, text messages, phone records and other documents amassed by the committee painted an unflattering portrait of Hogan’s former top aide. 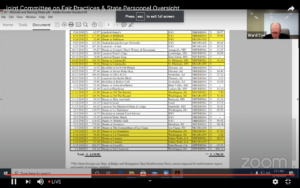 One of hundreds of pages of expense reports and other documents that committee counsel Ward Coe utilized during four hours of questioning of Roy McGrath, Gov. Lawrence J. Hogan Jr.’s former chief of staff. Screen shot.

The documents appeared to show a jet-set lifestyle of conferences, leadership trainings, luxe hotels and posh dinners — usually in the company of a top aide with whom he was friendly — all funded by the MES, a nonprofit quasi-governmental agency that until recently made few headlines.

Members of the General Assembly have castigated McGrath for energetically pursuing — and the MES board for approving — a year’s worth of severance, $235,000, when he stepped down as CEO of the service to become Hogan’s staff chief at an almost-identical salary. The payout came as the pandemic was sending shockwaves through the economy, placing strain on governments at all levels.

As he left the agency, McGrath also sought and received reimbursements for $55,000 in conferences, foreign and domestic travel, meals and assorted incidentals. While he attended conferences in Brussels, Paris, Italy and Israel and numerous U.S. locales, he also frequently got reimbursed for hotel stays in Maryland.

His travel-heavy tenure appeared to be without precedent at the agency.

His expenses were big-ticket — a $14,475 leadership course at the Harvard Kennedy School — and mundane.

He kept a receipt for a $4.13 hot fudge sundae with whipped cream that he purchased in 2019. “And you had MES pay for that, right?” Coe asked dryly.

According to a recently-completed audit of McGrath’s spending, 106 of the 269 items for which he was reimbursed did not make use of the state’s booking contract for flights and hotels. Those expenditures accounted for more than $47,000 of his travel.

About a quarter of his expenses exceeded the agency’s per diem. A similar number were submitted beyond the five-day submission deadline (in many cases, they were months late).

Nearly three dozen were deemed not “acceptable” within MES policy. More than 50 lacked sufficient documentation. And nearly 70 of the expenses were incurred after McGrath left MES.

“Mr. McGrath, you were the highest-ranking representative of the governor, and as such you should have held yourself to a higher standard,” said Sen. Clarence K. Lam (D-Howard), a co-chairman of the legislative committee.

“Instead, you betrayed the public trust for your own benefit, and I think for that you should be ashamed,” he added.

Lam said he was at a loss to determine how McGrath’s “globe-trotting” benefitted MES.

“We’ve heard a lot of evidence about large, unwarranted, unprecedented payouts for a lateral move within state government,” said Del. Erek L. Barron (D-Prince George’s), the other co-chairman. “It’s very troublesome. We would have liked to have heard more…”

The Harvard leadership course was originally scheduled to take place in April, but it was delayed until June and ultimately held online because of the pandemic.

During his first four weeks as Hogan’s staff chief, McGrath juggled his new post and the training. Hogan was aware that he was taking the course, McGrath testified, an assertion confirmed by the governor’s chief spokesman, Michael Ricci.

“McGrath told many people on our team that he was taking a course at Harvard,” Ricci said.

Just prior to McGrath’s testimony, Hogan in a news release announced the formation of a Transparency and Accountability Reform Commission.

“We need to take a long and hard look at the way that our quasi-governmental agencies operate, and focus on making real and systemic reforms,” he said in the statement.

Former state Sen. Andrew A. Serafini (R-Washington) will chair the panel, which Hogan said will return recommendations by next December.

Coe pressed McGrath to explain why he approved his own expenses, but he refused to say. Nor would he shed light on why he retained access to the MES computer system after leaving the service.

Four large expense reports McGrath submitted after he became Hogan’s top aide — worth tens of thousands of dollars — were approved within minutes of being submitted, according to documents Coe put on the screen.

Much of McGrath’s travel and many of his meals were with Matthew Sherring, the service’s operations director who resigned over the summer. McGrath and Sherring dined together 96 times, at an expense to MES of $6,100.98, according to a committee accounting.

The two men had worked together in a previous job.

Although McGrath acknowledged that Sherring is a friend, he declined to answer questions about the post he held or how he got hired. Nor would he describe a flurry of communications between the men as they sought to edit minutes of the closed-door MES board meeting at which McGrath’s severance and expenses were approved (a session neither man attended).

The text messages and emails Coe referenced in his questioning also appeared to show an effort to “go on the offensive,” in McGrath’s phrasing, after The Baltimore Sun began to report on the severance.

Sherring testified before the committee last week, also with an attorney, and he too invoked his rights against self-incrimination, more than 160 times.

Maryland Matters reported in October that state and federal investigators have opened a probe of MES’s finances. An estimated 95% of the service’s revenues are supplied by taxpayers and MES has done work at Camp David, the presidential retreat in Western Maryland, according to a well-placed source.

In addition to invoking his right to answer questions frequently, McGrath also said “I don’t recall” numerous times — though some of of his refusals strained credulity, as when he said he didn’t know what position lunch companion Steve Crim held.

Crim is a longtime Hogan adviser. And McGrath, who volunteered for Hogan’s 1992 campaign against U.S. Rep. Steny H. Hoyer (D-Md.) and contributed to his 2014 gubernatorial bid, surely knows what Crim does.

In one awkward moment, McGrath brought to mind the testimony this summer of his former deputy, Beth Wojton, who described him as an aloof manager who went out of his way not to talk with coworkers and was not supportive of women employees.

On Wednesday, McGrath could not recall the name of his administrative assistant.