Black policymakers challenged gubernatorial candidates to elaborate on their strategies to create equity, inclusion and ownership through their “Black Agendas” at a reception Thursday evening.

“I think it’s important that we put things in context because when you start talking about a Black Agenda, a Black Agenda means something different to everyone in the room,” Del. Darryl Barnes, the chair of the Legislative Black Caucus, said Thursday evening. 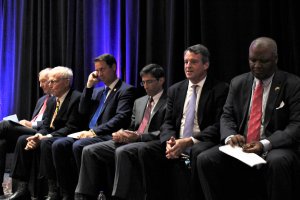 Commerce Secretary Kelly M. Schulz (R) missed the event due to a prior commitment.

House Speaker Adrienne A. Jones (D-Baltimore County) and members of the Legislative Black Caucus introduced their Black Agenda at the start of the 2021 session with the aim to reduce race-based inequities in economic opportunity, public health and housing.

Jones didn’t stay to hear the candidates but did tell them that a “rising tide lifts all boats.”

“If we want to continue to build a strong economy, we need to make sure that our policies work to improve the lives of every resident, particularly those that have been disenfranchised,” she said.

Jones pointed to the results of the 2020 Census as a reason to continue striving toward the goals of the Black Agenda: people who identify as white alone now make up less than half of the state’s population.

“Traditional minority issues like economic mobility, public safety and health equity in communities of color are now Maryland’s issues,” Jones said. “None of the candidates here today can afford to take minority voters, or any voters, for granted.” 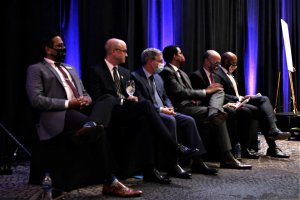 Of the candidates at the reception Thursday, Franchot was one of the first to make his Black Agenda publicly available.

Baker, called the evening “a beginning conversation,” and stated his intent to officially roll out his own Black Agenda “within the next two weeks.”

Moore said that he released his on Monday.

Barnes challenged the remaining gubernatorial hopefuls to publish theirs by Nov. 1.

Sen. Antonio Hayes (D-Baltimore City), who has already publicly endorsed Moore as his candidate of choice, said one of the things that attracted him to Moore’s campaign was the notion of “building Black wealth through economic empowerment.”

Hayes said he heard that notion echoed by a few other candidates Thursday.

“I think sometimes part of my frustration with us as Democrats [is that] we shy away from some of those economic issues, but I think this field of candidates is talking about a different way [and] I was encouraged about it,” Hayes said in an interview.

Sen. Arthur Ellis (D-Charles) said that he wants to hear about candidates’ transportation and public health policies. He also wants them to put their money where their mouth is.

“We want more of those issues to be addressed, forcefully — not just in a little speech here, but … on their website,” said Ellis. “Talk about it, put it out there and let everyone know that you’re serious.”

During their speeches, multiple candidates regurgitated their entire platform — simply to a different audience on a different day from a different stage. 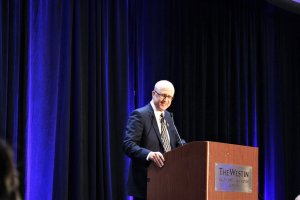 But there were some new messages, like Lashar who said he hopes to be the confirmed candidate for the Maryland Libertarian Party in the next few days.

There were also a few faux pas.

Del. Sheree Sample-Hughes (D-Lower Shore) has been the House Speaker Pro-Tem for two-thirds of Cox’s tenure in the legislature. 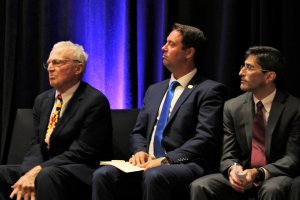 Ficker said that he’ll be the first Maryland governor whose parents were born in Africa and, to the audience’s confusion, added: “I’m looking forward to being your governor. I will be a Caucasian governor, and I’m also going to be the first Black governor that Maryland has. Thank you very much.”

Ultimately, Black lawmakers said they are looking for a governor who is willing to make bold moves on behalf of Black and Brown communities.

“We are looking for someone that is bold and courageous,” Barnes said. “And if one is not speaking of a Black Agenda, then I am going to act like Malcolm X and I’m going to make sure that we tell our people that we are not voting for a candidate that is not putting our needs and our concerns first. Because the day of being ‘bamboozled and hoodwinked,’ let me say, is over.”