Former Republican National Committee chairman and Lt. Governor Michael Steele acknowledged he didn’t know what sort of reception he would get at a high-profile social event in Ocean City on Thursday.

For Maryland politicos who are even half paying attention, the reasons for his apprehension are obvious.

Steele committed an act of apostasy last year when he endorsed Joe Biden over Donald Trump, a man who retains significant support with rank-and-file GOP voters, despite his role in the lead-up to the Jan. 6 attack on the U.S. Capitol and other misdeeds.

To make matters worse, perhaps, he remains a regular presence on the network conservatives dislike most, MSNBC.

It turns out Steele need not have worried about how he would be greeted by people attending state Senator J.B. Jennings’ “Sunset Cocktail Reception” in Ocean City on Thursday.

The event, at Ropewalk on Coastal Highway, was one of many social events occurring in concert with the Maryland Association of Counties’ annual summer conference.

But it attracted an A-list crowd that included Gov. Lawrence J. Hogan Jr. (R) and members of his cabinet, legislators from both parties, former Ocean City Mayor Jim Mathias, one potential rival in next year’s Republican gubernatorial primary, and scores of others.

Steele was greeted enthusiastically by seemingly everyone he encountered, enjoying pre-pandemic levels of hugging, back-slapping, reminiscing and laughter.

“It’s nice to walk back into a space where you meet up with old friends,” Steele said. “You see some folks who are working for the other teams, and you’re like, ‘okay, but we’ve got good history.’ So, it’s good. It’s all good.”

Steele adviser Jim Dornan said the former lieutenant governor avoided awkwardness — or outright hostility — due to his “ability to connect with people in an incredible way.”

“Obviously you walk into something like this, with all the history, and you wonder if it’s going to be a great reception, a good reception or a not-so-great reception,” he said. “[We were] a little nervous to start, of course. You can’t deny that. But it goes to Michael’s strength as a personality.”

“He walks into a room and the whole place lights up.”

Being able to survive a cocktail reception at the beach is no predictor of how the Republican primary will shake out.

Steele has formed an exploratory committee as he decides whether to take on a trio of announced candidates, Hogan Commerce Secretary Kelly Schulz, Trump supporter and state delegate Dan Cox, and Robin Ficker, an anti-tax activist and frequent office-seeker.

Although he made history in 2003 when he took office as the first African-American ever elected statewide, it is by no means clear that there is a lane for someone who turned on a sitting president from his own party. 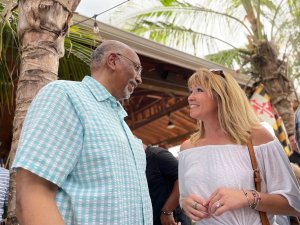 Schulz’s campaign has been criticized for its slow start, but she has numerous built-in advantages. Running with the support of many members of Hogan’s political team, she is expected to report robust fundraising at the next campaign finance deadline.

In an interview, Schulz brushed aside Steele’s “theatrics.”

“The more, the merrier,” she said of his potential candidacy.

“My strategy is to tell Marylanders every single good thing about what’s happening in our campaign and our message and our vision. And I am not distracted by anybody else’s theatrics,” Schulz said. “I’m focused on the mission and the vision of my team.”

Montgomery County Councilmember Craig Rice (D) was walking through the convention center in Ocean City on Thursday, resplendent in a seersucker jacket, bowtie and white pants.

Rice’s plans for 2022 and beyond are a source of great speculation in political circles these days. He’s term-limited after three terms on the county council but hasn’t ruled out running for another office next year. He could also snag a high-profile appointment if there’s a Democratic governor in 2023.

“There’s a multitude of opportunities,” he said.

For now, Rice is focusing on his council duties — and his new, yearlong gig as chair of the National Association of Counties Human Services and Education Steering Committee.

Rice said it gives him an opportunity to focus on the issues he’s prioritized in local government, like more education funding, greater spending on social programs, and expanded broadband, but at a national scale. He’ll spend a lot of time testifying on Capitol Hill on NACo priorities, and also will travel around the country to address advocacy groups and meet with like-minded colleagues.

Rice noted that he was assigned to the county council’s human services and education committee when he was first elected. “I feel like I’ve come full circle.”

As for his political strategy, Rice said he expected to have it sorted out and be able to say something publicly “sooner rather than later.”

Brimming With Confidence, Franchot Lays Out Plans to “Reinvent” Maryland

Franchot offered a laundry list of promises during remarks at a mid-afternoon fundraiser in Ocean City, where state and local leaders are attending the Maryland Association of Counties’ summer convention.

His platform, contained in a glossy 20-page booklet, copies of which were spread across the tables, would “reinvent” and “reimagine” the state. 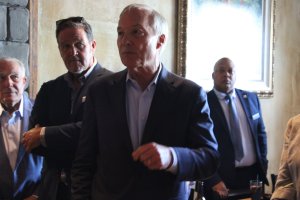 The event was held at Liquid Assets, a retail store, bar and restaurant on Coastal Highway, with approximately 100 people in attendance.

The state’s four-term tax collector said his administration would spend its first three months focused on the basics.

Then, he pledged, the state would embark on a multi-pronged plan to improve health care by establishing clinics within a 15-minute drive for rural residents or a 15-minute walk for people who live in urban areas.

Maryland would pay the tuition debt of any out-of-state student who attends a state college or university, provided they live here for five years after graduation, he added. And he would fund a national ad campaign to promote tourism.

“People all over the state tell me, ‘We know you, we’ve seen you, you’ve visited,’” Franchot said.