Maryland has administered fewer than half of the doses it has received from Pfizer and Moderna. Thirty-five states and the District of Columbia have a higher use-rate than Maryland.

“Maryland has unbelievable assets. We are global leaders in public health,” Ferguson (D-Baltimore City) told reporters. “We should have the infrastructure stood up that is the best in the world. That’s not where we are.”

Ferguson vowed that Republican Gov. Lawrence J. Hogan Jr.’s nomination of Dennis R. Schrader to become secretary of the Maryland Department of Health, which is subject to Senate confirmation, will not move forward until the state shows “progress” in its vaccination push.

“There is nothing more critical in state government than getting vaccine administration right,” he said.

Schrader has been serving as acting secretary since Dec. 1.

The state’s stockpile of unused vaccine stands at approximately 300,000 doses.

Speaking to reporters shortly after Ferguson’s press conference, Hogan (R) did not directly address the state’s sub-50% distribution rate — but he again assured residents that the state will soon run through its allotment.

“We added additional private-sector providers. We’re talking about standing up mass vaccination sites, and now we’ve got 1.5 million people that are allowed to get the vaccine,” he said.

The governor’s office released a chart showing that the state’s hospitals have used 60.2% of their vaccines, and local health departments have administered 64.6% of their doses. Long-term care facilities have only used 37.1% of their doses, however.

Hogan said the state will soon launch a “major marketing campaign” to build public confidence in the vaccine. The effort will include well-known individuals who will “get out there and help convince people that they need to take the vaccine.”

“We’re going to put time and energy and money into marketing the safety of the vaccine,” he added.

Hogan, his wife, and Lt. Gov. Boyd K. Rutherford (R) were publicly photographed getting their shots on Monday, as was former Gov. Parris N. Glendening (D). 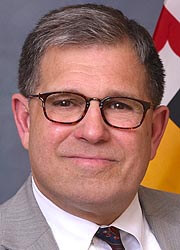 The governor also defended Schrader, who as director of operations at the health department before being tapped to replace retired former secretary Robert R. Neall helped guide the state’s response to COVID-19.

He said Schrader was instrumental in the state’s addition of 6,000 hospital beds, the creation of the coronavirus testing program and the rollout of the vaccination campaign.

This is not the first time that Senate leaders and Hogan have clashed over the governor’s desire to elevate Schrader to the top job at the Health Department. The Senate and Hogan had a months-long standoff over Schrader when Hogan nominated Schrader to replace his first Health secretary, Van T. Mitchell, in 2017. The Senate refused to confirm Schrader — and that led to a protracted battle over how long Schrader could lead the agency as acting secretary and whether he would get paid.

Eventually, Hogan tapped Neall for the job and Schrader remained at the agency in a lesser role.

Ferguson also announced the formation of a bipartisan Vaccine Oversight Work Group that will meet weekly starting next week. The work group will focus on the “efficiency” of the state’s operation, the supply chain, and an analysis of demand versus supply.

It will also focus on “access and confidence in minority communities,” he said.

Speaking at Ferguson’s news conference, Dr. Kavita Patel, a family practitioner in Prince George’s County, said the state must provide more information about the vaccine’s safety and where to get it.

“When we finally have light at the end of the tunnel, it feels so helpless to not know how to give people even the simple guidance,” she said, “especially when we have communities that do not have the tech savvy, don’t have family members who can spend all day refreshing portals.”

Patel said her clinic has seen 38% of the public health workers who are eligible to receive the vaccine decline to take it. She blamed “a lack of information” and “misinformation.”

Patel said she has “gone out into the street” to find people to vaccinate at the end of the day.

“I feel like it’s liquid gold,” she said. “If it’s a 20-year-old and we can consent them, I’m OK with that, because I can’t let it go to waste, but we do know of vials that have gone into the garbage.”

Meetings will be live-streamed, the president said.

In an illustration of the uncertainty swirling around the availability of vaccines in Maryland, Prince George’s County Executive Angela D. Alsobrooks (D) announced on Tuesday that her health department will cancel any vaccination appointments scheduled for after Feb. 9 as part of a “reset.”

The move comes as many people from Montgomery and neighboring counties are crossing into Prince George’s to get their shots.

Added Alsobrooks: “We want people who are living here and working here to get their vaccinations here.”

Some material in this report was provided by our news partners at WTOP News.