Gov. Lawrence J. Hogan Jr. (R) wasn’t the only Maryland governor to get his COVID-19 vaccination on Monday.

Former Gov. Parris N. Glendening (D) also got a shot on Monday, at the Anne Arundel County Department of Health, with County Executive Steuart Pittman (D) present. And Glendening used the occasion to send out his first tweet ever. 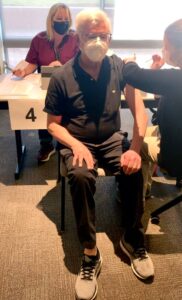 Hogan’s vaccination, which he took in the State House alongside first lady Yumi Hogan and Lt. Gov. Boyd K. Rutherford (R), was understandably a big media event, and he used it to urge eligible Marylanders to sign up for the vaccine as quickly as possible.

“Getting vaccinated is the only way to keep you, your family, your friends, and your community healthy and safe, and it is absolutely critical to preventing more illnesses, more hospitalizations, and more deaths,” Hogan said. “It’s the only way to end the damage to our economy and to bring this pandemic to an end.”

Glendening, who is 78, was also photographed and videotaped getting his vaccination. He said he was hoping to share the image with friends and supporters in Anne Arundel County, where he lives, and in Prince George’s County, where his political career took off, to urge seniors to get the vaccine.

His one regret, he said, is that the photo suggests he was in pain. “In fact,” he reported, “I barely felt it.”