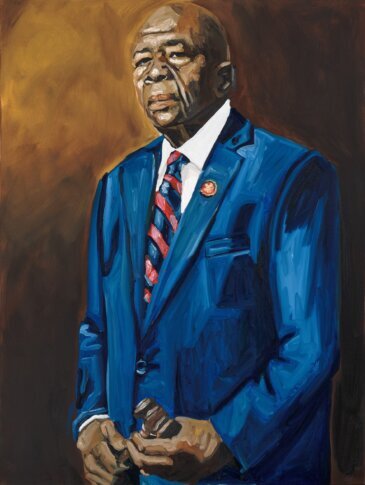 A new portrait honoring the life and legacy of U.S. Congressman Elijah E. Cummings will be unveiled at the Baltimore Museum of Art later this month, before heading to its permanent home in the U.S. Capitol

Cummings, who died in October 2019, had a political career defined by his civil rights advocacy.

He has been memorialized by Baltimore-based artist Jerrell Gibbs, who is known for his work “evocative portraits of Black life and identity,” according to a release from the BMA.

The portrait will be viewable to the public in the John Russell Pope building from Dec. 22 to Jan. 9, where it will then be moved the Capitol.

“In life Elijah and I enjoyed supporting the diversity of artists and events hosted by the Baltimore Museum of Art,” said Maya Rockeymoore Cummings, a nonresident senior fellow at the Brookings Institution, in the release.

“We are exceedingly pleased with the result. Jerrell Gibbs is a masterfully expressive painter and his stunning portrait perfectly captures Elijah’s essence and majesty. It is a timeless masterpiece.”

Rockeymoore Cummings and the BMA felt it was imperative that the artist have their roots in Baltimore just as the late congressman did.

Gibbs was chosen from the short-list of finalists that included fellow Baltimore artists Monica Ikegwu and Ernest Shaw. The BMA said that over 30 local artists were considered in this process.

The museum said that the painting is inspired by Baltimore-based photographer Justin T. Gellerson’s image of Cummings, which is also featured on the cover for Cummings’s biography, “We’re Better than This: My Fight for the Future of Our Democracy.”

“Working on a painting of such great importance meant so much to me. I am extremely honored to have been considered and selected to paint the official portrait of The Honorable Elijah Cummings,” said Gibbs in the release.

Born in 1951, Cummings endured racism in segregated Baltimore during his youth and was labeled special education student in his early years, according to the BMA. He would go on to graduate with honors from City College, Howard University and the University of Maryland School of Law.

Cummings became the first African-American to serve be named speaker pro tem during his 14 years in the Maryland House of Delegates. He then ran and won a seat in Congress in 1996 where he represented parts of Baltimore City, Baltimore County, and Howard County while holding Maryland’s 7th congressional district.

He became the first African American legislator to lie in state in the U.S. Capitol after his death.