Threats to halt work on the Purple Line over a contract dispute are stirring fears among elected officials, residents and business owners in Montgomery and Prince George’s Counties.

The consortium overseeing the 16-mile light rail line, Purple Line Transit Partners (PLTP), filed notice this week that it will end its partnership with its contractors and the state in August if a resolution isn’t reached by then.

The parties are deadlocked over who will bear responsibility for a reported $755 million in overruns on the $2 billion project. The first portion of the Purple Line, which will connect New Carrollton and Bethesda, is set to begin operation in late 2022, but that timetable is in jeopardy because of the contract dispute.

On Wednesday, the project’s construction team, Purple Line Transit Constructors, filed a notice with the state that it intends to lay off more than 700 workers if a settlement regarding cost overruns isn’t reached in the next 60 days, Bethesda Beat reported.

“I’m very pessimistic about whether this contract will be completed,” Montgomery County Executive Marc B. Elrich (D) told Maryland Matters. 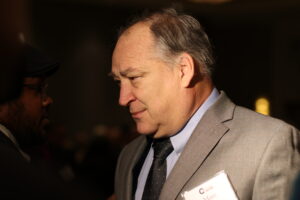 Elrich said the construction team has rebuffed the state’s attempts to find a compromise.

“I know that the state made numerous settlement offers to them and there’s no compromise,” he said. “There’s been no, ‘Can we talk about this and go halfway?’ They’ve apparently responded every time saying, ‘We want what we want.’ That’s extraordinarily expensive.”

In a letter to Maryland Transportation Secretary Greg Slater, members of the Prince George’s County Council said they are “extremely concerned by Purple Line Transit Constructors’ threat to walk away from the project due to delays and cost overruns.”

“Construction has already disrupted small businesses and residential neighborhoods along the corridor and any further delay will jeopardize the promise the State made to these communities and Prince George’s County when this P3 project was first launched,” lawmakers wrote.

“An incomplete project will be an eyesore in communities and will depress neighborhoods whose working-class residents only seek upward economic mobility and enhanced transportation options.”

The filing by Purple Line Transit Partners came two days after a June 20 deadline for the consortium and the project’s construction team came and went without a compromise.

Erin Henson, a spokeswoman for the Maryland Department of Transportation, said efforts to reach an agreement are ongoing.

“Despite the substantive settlement offers made by [the state], PLTP has yet to propose reasonable settlement terms. Further, MDOT disputes PLTP’s right to file a Notification of Termination, and considers this action a default,” she said in a statement.

“We intend to vigorously protect the interests of the citizens of Maryland and pursue all legal options available to the state,” she added.

Henson said MDOT “will utilize all measures available to the state to ensure work continues on the Purple Line and to mitigate the impact of PLTC and PLTP’s actions on construction momentum.”

“We look forward to continuing discussions and remain fully committed to completion of the project.”

Sen. William C. Smith Jr. (D-Montgomery) said if the project “were to fail or stall further, it would be devastating for the community.”

“The construction is so disruptive for our local economy, local businesses, neighborhoods and community members,” he said. “It would be best to have quick resolution and to move forward.”

Elrich said that if construction ends abruptly and the state has to find new firms to complete the work, MDOT will be in a weak bargaining position.

“You get your clock cleaned on a rebidding, because everybody knows you have to finish it,” he said. “You’re in the middle of a really embarrassing situation and I think the price of getting people to commit to finish it is going to be expensive.”

The executive said it was a mistake not to include mandatory arbitration in the Purple Line contracts.

“Nobody should have been able to pull the plug on this. Not the contractor nor the state,” Elrich said. “It’s mind-boggling they didn’t have this in the contract.”

Elrich is a critic of the state’s plan to build Express Toll Lanes along the Capital Beltway and Interstate 270 and he said any future P3 contracts must have language preventing any of the parties from walking away.

“I don’t want to be in this situation again,” he said.