For more than 20 years, Abeba Tsegaye and her sister Lene have served coffee, pastries and sandwiches to people who live and work in downtown Silver Spring.

Their coffee shop, the Kefa Cafe, is on Bonifant Street, just off bustling Georgia Avenue in a neighborhood full of small, locally-owned businesses.

There is a large, multi-colored African-themed mural on the building’s side and the interior is eclectic and cozy, the sort of place where customers are likely to bump into friends and acquaintances.

Although they have survived more than two decades of economic ups and downs, one thing keeps the Tsegaye sisters up at night — the Purple Line, the light rail line that will eventually run directly in front of their cafe.

The 16-mile rail line, which is under construction in Prince George’s County, will link the New Carrollton and Bethesda Metro stations. Area residents and business-owners alike — including Abeba and Lene — say they are looking forward to the mobility options the Purple Line will bring.

But they worry whether they can survive 18 months of construction that is expected to make their street all-but-impossible to traverse.

“The next two years is going to kill the business,” said Abeba Tsegaye. “Our customers have told us — as much as they love us — that they will have no way to get here.”

Already crews have come through the neighborhood to move utility poles and underground cables. Large holes that workers dug, trucks, construction activity and the loss of parking spaces scared away many regular customers, she said.

That work is done. Now the owners of Kefa Cafe and other mom-and-pop businesses brace for the main event —  laying the track.

Del. Jheanelle Wilkins (D-Montgomery) has introduced legislation that would make tax credits available to small businesses that can document losses caused by the project.

Her bill, House Bill 540, and its Senate companion, SB 645, would require the Department of Transportation to certify that a business is in the Purple Line construction zone and to evaluate any claims those businesses submit. 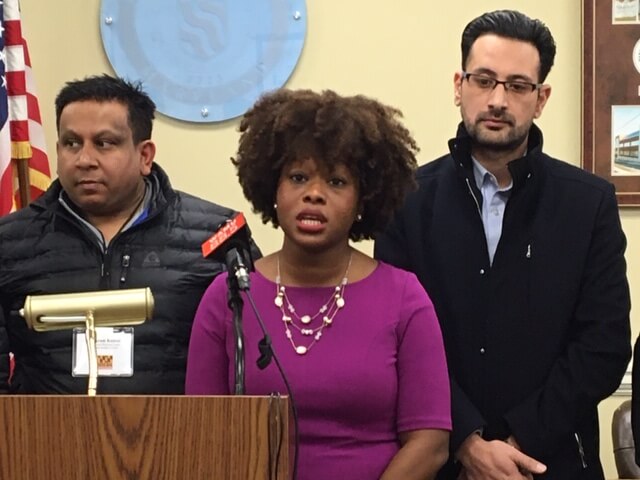 At a news conference in Annapolis on Thursday, several business-owners — many of them first-generation immigrants — testified that they have been hurt financially, in most cases because customers have trouble reaching their doors due to torn-up sidewalks and streets.

Some said they have had to lay off workers. Restaurant-owners said even their delivery business has been hurt, because, by the time their drivers reach their customers, the food order has gotten cold and unappetizing.

MDOT has not taken an official position on the bill. But in a letter to lawmakers, officials said the agency has no ability to assess individual claims regarding lost revenue.

A legislative analysis estimated it would cost $427,000 next year and more than $348,000 the year after to create a special unit for that purpose.

“The basis of a business interruption claim – for example, a businesses’ changing financial circumstances – is a complicated matter and isolating these circumstances to a direct correlation to a particular construction project is difficult,” the agency wrote.

MDOT said it would be necessary to determine whether other factors — unrelated to construction — contributed to a business’s decline. Also, someone would have to check to see whether each firm making a claim is eligible for business-interruption compensation from their insurance carrier.

But backers of Wilkins’ legislation urged the General Assembly to help businesses impacted by construction.

“These are longtime businesses that have never asked for help,” she said. “They are skilled at meeting their customers’ needs — and they’ve run out of answers.”