In a bid to ease one of the worst bottlenecks in the country, the governors of Maryland and Virginia announced Tuesday that the two states will partner on a replacement for the aging and overcrowded American Legion Bridge on Interstate 495.

The new 12-lane span will be built where the existing eight-lane bridge stands. It will be financed and constructed by one or more private contractors who will have the right to charge tolls of varying amounts on four new “express lanes” — two in each direction.

Eight lanes will remain available at no cost.

The American Legion Bridge, which is backed up for many hours a day, carries Capital Beltway motorists over the Potomac River, linking Montgomery County and Northern Virginia.

Daily traffic has grown 390 percent since the bridge opened in 1962, according to Maryland officials, with 235,000 vehicles using it daily.

The use of a “public-private partnership” to finance and build the new bridge is an extension of the plan Maryland Gov. Lawrence J. Hogan Jr. (R) announced in 2017 to widen I-495 and Interstate 270, a proposal that has played to mixed reviews among politicians, planners and the public in Montgomery and Prince George’s counties.

Virginia has been aggressive in its use of toll-financed road expansion. The state is nearing completion on 90 miles of “managed lanes” and will use its existing contract with construction giant TransUrban to build its portion of the American Legion Bridge project.

Maryland Transportation Secretary Pete K. Rahn has repeatedly pointed to Virginia as a pioneer in the use of “P3” projects.

The leaders said the agreement to partner on a new American Legion Bridge represented a major advance in regional cooperation. After speaking to the group of business leaders, which included a number of potential bidders on the project, the governors signed a large sign that read “Capital Beltway Accord.”

“This is phenomenal,” said Emmet Tydings, vice chairman of the Suburban Maryland Transportation Alliance. “It’s a great advance for the state of Maryland. … Other than the Metro compact, this is the first new regional cooperation we’ve seen between the states.”

Transit advocates continue to press Maryland to do more to reduce the number of single-occupancy vehicles on the road. They maintain that new lanes will create more traffic — and that toll lanes will primarily benefit the well-to-do.
“The only winners from this plan are the P3 financiers and the few wealthy drivers who can afford to pay $40 tolls every day,” said Maryland Transit Opportunities Coalition Chairman Ben Ross. “Everyone else will sit in traffic jams — otherwise drivers won’t be willing to pay the high tolls the P3 financiers need to make a profit.”
The project will be the subject of lengthy environmental studies and engineering work, then will be put out to bid. The Maryland Board of Public Works must approve any contracts necessary to drive the project, as must the Commonwealth Transportation Board.
Transportation secretaries from the two states expressed the hope that they will be able to break ground on the billion-dollar project by 2022.

Hogan called the agreement to build a new Potomac span an “historic, once-in-a-generation” accord that will create “a new, integrated Capital Beltway system.”

“The result will be less traffic, more peace of mind, cleaner air and a better quality of life for hundreds of thousands of area residents and commuters for decades to come,” he said.

Each state’s “concessionaire” will pocket the revenues collected on their side of the new bridge.

The new span will include bike and pedestrian lanes. That cost will be split 50-50.

“Right now, in the afternoon, it can take 15 minutes or more to drive the last three miles from where [our] express lanes end to the American Legion Bridge,” Northam said. “That’s bad for commuters, it’s bad for our regional economy and it’s simply not sustainable. So we’re reaching across the river and across the aisle to do something about it.”

Leaders said the region is expected to add more than a million residents between now and 2040, making the expansion of the Beltway a matter of some urgency.

Rahn and his Virginia counterpart, VDOT Secretary Shannon Valentine, said the use of P3 financing means no general fund dollars will be needed to build the new bridge, and that no homes will taken on either side of the river.

[Rahn conceded that 34 homes may be taken to widen the Beltway between the bridge and the Interstate 95 interchange near Adelphi, though he expects the actual number to be much lower.]

Maryland, he said, will seek solicitations on two projects simultaneously — one the widening of Interstate 270 from Interstate 370 to the Beltway and other from the American Legion Bridge to I-95.

“We have to be approaching this as a system,” he told reporters.

Asked why Virginia would agree to spend more than 21 percent of the cost of the new bridge, Valentine noted that the state has already made great strides in expanding its transportation network in Northern Virginia.

“We really believe that having those connections across the American Legion Bridge maximized every penny of our investment — and that is why we were working with Maryland to get the entire structure done and to create that seamless mobility,” she said, standing alongside Rahn.

Many Maryland residents work along the bustling Dulles corridor and in Tysons Corner, and Dulles International Airport draws a big chunk of its passenger base from wealthy Montgomery County.

Valentine said conversations about a joint solution to the American Legion Bridge bottleneck began in late January when she reached out to Rahn.

She sidestepped a reporter’s suggestion that Virginia was paying “more than technically your share.”

“Technically, we were willing to pay the fair share, and honestly it is a very honorable way to deliver this project,” she said. 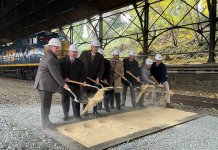