For the first time in more than three decades, the Maryland Senate will be led by someone other than Mike Miller.

“My mind is still strong but my body is weak,” said Miller, 76, who has battled Stage 4 prostate cancer for nearly a year. “I suffer from fatigue and this is a full-time job. It’s a statewide job and we need somebody younger.”

Miller will continue to represent District 27 — which covers portions of his native Prince George’s County and his adopted home of Calvert County, as well as a sliver of Charles County — as a member of the Senate.

Sen. Bill Ferguson (D-Baltimore City) is poised to replace him as Senate president.

Miller’s announcement was not completely unexpected. In January, he announced that he was being treated for cancer, which had spread through his system.

Standing for long periods of time was painful, and staff brought in a special chair so he could half-sit, half-stand during Senate sessions this year. He missed several days as he took chemotherapy treatments, and at other times would pass the gavel to President Pro Tem Katherine A. Klausmeier (D-Baltimore County). 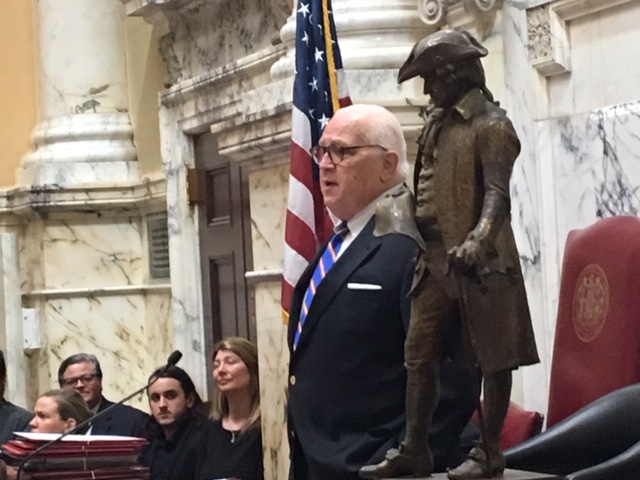 His cocksure personality, his use of raw power to sway legislation and budgetary priorities, and the length of his tenure combined to make him the dominant force in State House politics for 33 years. His time as Senate president began when Ronald Reagan was president of the United States and overlapped with five governors.

“President Miller has been a strong, unifying leader for the legislature and the state,” Gov. Lawrence J. Hogan Jr. (R) said in a statement Thursday. “His steady presence and trademark humor will be deeply missed as President, but we are pleased to know that Mike will continue to represent the people of District 27 in the Senate.”

Miller and Hogan have known each other since the 1960’s.

U.S. Sen. Chris Van Hollen (D), who served under Miller for eight years in Annapolis, said that Miller had insisted he be let out of the hospital Wednesday so he could speak at a memorial service at Morgan State University for the late U.S. Rep. Elijah E. Cummings (D-Md.), who died last week.

In April, another long-serving, highly-regarded “Mike” — House Speaker Michael E. Busch (D-Anne Arundel) — died at the age of 72 on the eve of Sine Day, bringing to an end a unprecedented hold on power in that chamber.

A beloved “coach” who nurtured an entire generation of leaders, and who was less prone to bombast and casual profanity than Miller, Busch served from 2002 until his death, a run half as long as Miller’s but remarkable nonetheless.

For nearly two decades, governors would come and go, but “the Mikes” used their outsized influence to set the course of state government policy. Without their approval, not much happened in Annapolis.

That Miller held power for so long is testimony to many factors, colleagues say.

A history buff, Miller used the experience of past leaders — political, military and otherwise — to thwart potential plots to take him down.

A shy man who willed himself to become a gregarious backslapper, he had the ability to connect with — and read — colleagues of both parties, governors and cabinet members, politicians from outside the Senate, activists, lobbyists, constituents and journalists.

A prolific fundraiser who showered money on favored incumbents and chosen challengers, Miller traveled the state and worked the back rooms to his advantage — and to the benefit of his beloved Democratic Party.

An ardent political junkie, Miller kept abreast of trends and evolving mores, a skill he used to meet changes before they arrived, and to pivot on policy as needed.

He appointed women and people of color to leadership posts and — in another bid to stay current with the times — he strategically would allow the chamber to vote on an issue he (or his Southern Maryland constituents) opposed, such has same-sex marriage or abortion rights.

And when a younger, more progressive batch of senators was elected, in some cases taking out Miller loyalists, he set out to court each one individually before they took office. In those sessions, usually in his ornate, history-filled corner office off the Senate floor, Miller would turn on the charm, listening for clues as to what made the new arrival tick.

The oldest of 10 children, Miller got many of his core values from his mother, Hoyer said in an interview.

“His mom was outspoken. That’s a lot of where Mike gets his outspokenness,” the congressman said. “But he also gets great values. A deep sense of duty and an empathy for people. … a deep sense of fairness and of wanting to make sure that people have a shot in life and have help in life.”

Former Gov. Parris N. Glendening (D) had an up-and-down relationship with Miller that lasted decades. Though they were both from Prince George’s County, the men had very different styles and clashed frequently – especially when Glendening was county executive.

Nevertheless, Glendening said in a recent interview, Miller is “a man of his word and he is effective.”

“I appreciated the fact that when you cut a deal with Mike, when he said he will help on something or he will kill something, it happened,” the former governor said. “It happened.”

When the two men served alongside one another during Glendening’s eight years in the State House, pundits and colleagues expected the gregarious, more politically conservative Senate President (a practicing Catholic) and the wonky, more liberal governor (a less religious Catholic) to be at each other’s throats. Instead, they agreed to make the new arrangement work to their mutual advantage.

Glendening said he had a “secret weapon” — a mutual colleague — who schooled him on how to deal with the powerful, headstrong presiding officer.

“The key to working with Mike is to remember that — outside of his family — he has three loves: one is the state of Maryland, two is the State Senate, and the third one is the Maryland Democratic Party,” Glendening said.

“(I was told) anything that you have that is really important, that you want to get done, wrap it around one of these three things, and you’ll appeal to him…”

A man of the middle

“The Senate kept moving — as the House did — to the left. And Mike was able, and is still able, to hold the Senate to more of the middle.”

Levitan chaired the influential Budget and Taxation Committee before becoming a lobbyist. In Miller’s early years as president, “he didn’t get involved in the budget, except when it involved the University of Maryland, College Park, and then he was always involved.”

“But as time went on,” Levitan said, “Mike became involved in everything. He ran the Senate. It was second-nature to him.”

Progressive groups were furious with Miller when he bottled up legislation to increase the minimum wage in 2018. They held a noisy protest outside the State House, waving signs that said, “Take a Hike, Mike,”  promising to support primary challengers to key Miller allies. 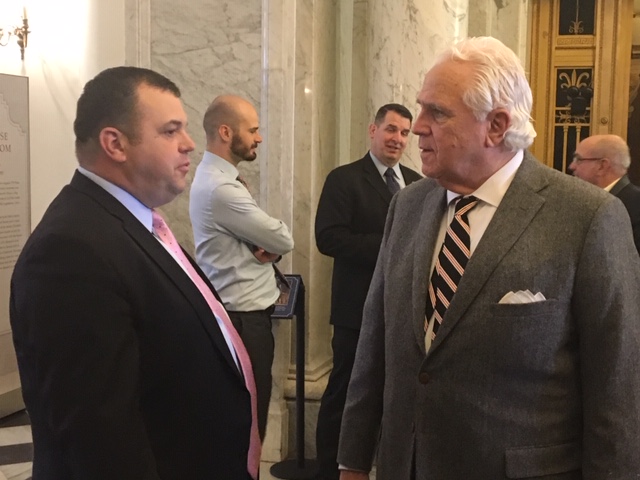 A number of Miller lieutenants lost their reelection bids or retired that year, and Miller allowed a reworked minimum wage bill to come up during the 2019 session.

Comptroller Peter V.R. Franchot (D) attended the rally and pledged to help a candidate running against Miller in the primary. Miller romped to victory.

The two men criticized each other frequently, and Miller was instrumental in advancing measures to strip the comptroller of large portions of his portfolio.

Miller often said that his “legacy” issues would be education, the environment and the legalization of casino gambling.

Though he was perceived to be conservative on fiscal matters, Miller frequently backed tax increases that boosted spending on education, transportation or other priorities, particularly during Martin O’Malley’s tenure as governor.

Reporters flocked to the steps of the Senate rostrum after floor sessions because Miller was usually willing to hold court on a wide range of issues. His comments combined political analysis, the likely fate of pending legislation and blunt characterizations of political allies and adversaries.

When Hogan won the 2014 gubernatorial race in an upset, Miller told a reporter during a live TV interview that Hogan’s win was no fluke — and that he would serve eight years, despite the lopsided voter registration edge held by Democrats.

Though he tended to have close relationships with Republican leaders in the state Senate, Miller frequently bashed national members of the GOP for their viewpoints and tactics.

The gaffe that lasted

Miller’s candor occasionally got him in trouble — most notably in 1989, when he spoke critically of Baltimore in a taped interview with a Washington, D.C., television station.

“Baltimore is a goddamn ghetto,” he said, when he thought the interview was over, but the camera was still rolling. “It’s worse than inner-city Washington, D.C. It is shit … I hope you’re not going to play this on tape,” he said with a hearty laugh.

Baltimore leaders didn’t find the remark amusing, and Miller apologized. Any thought he had of running for governor in 1994 (or after) appeared to evaporate, a victim of his reluctance to keep controversial views to himself.

Miller survived at least one coup attempt, in 2000, when then-Sen. Thomas L. Bromwell (D-Baltimore County) sought to rally support for a leadership change. It fizzled.

Many Democratic senators who might have harbored ambitions to lead the chamber – including Van Hollen, Brian E. Frosh and Richard S. Madaleno Jr. – opted to seek another office, rather than wait perhaps many years for their shot at the top spot.

As testimony to the good feelings most of his colleagues had for him, they voted to name the new Senate office building in Miller’s honor in the early 2000s.

Soon after reaching the Senate in 1975, Miller became chairman of the Judicial Proceedings Committee.

Miller, who has also had a robust law practice, said he was happy to be returning to his original role as a rank-and-file member of the legislature.

“I look forward to being a state senator,” he said.