WASHINGTON — Congressional Republicans scrambled on Monday to decide how — or whether — to respond to President Trump’s continued tirade against four freshman Democratic congresswomen.

Some Republicans openly slammed the president’s comments that the congresswomen “go back” to the countries they came from (although three of the four were born in the United States). Some took a cautious tone, gently chiding the president while calling on both sides to tamp down their heated rhetoric. Some vociferously backed Trump. Many remained silent on the issue.

The political brawl is nowhere near over. Trump doubled down on his inflammatory tweets on Monday, saying at the White House that the four Democratic freshmen —  Reps. Alexandria Ocasio-Cortez of New York, Ilhan Omar of Minnesota, Rashida Tlaib of Michigan and Ayanna Pressley of Massachusetts — are “free to leave” the country. He accused House Speaker Nancy Pelosi (D-Calif.) of being a racist.

After remaining largely silent about Trump’s remarks over the weekend, congressional Republicans began weighing in on social media and in news releases Monday. Some were pressed on the president’s comments on Capitol Hill as they returned to Washington from their districts.

Rep. Mark Meadows (R-N.C.), a Trump ally and president of the conservative Freedom Caucus, told reporters Monday that he didn’t want to comment on whether Trump’s remarks were appropriate.

“I don’t comment on Twitter wars back and forth,” Meadows said. However, he said he thinks Trump’s comments “were not based on any religious preference, on any skin color,” but rather on frustration over “having a crisis at the border and having a whole lot of people weigh in and yet not really putting action to those words.”

Rep. Andy Harris (R-Md.) told WBAL’s Bryan Nehman that Trump’s remarks were “clearly not a racist comment.” Trump “could have meant go back to the district they came from — to the neighborhood they came from,” Harris said. 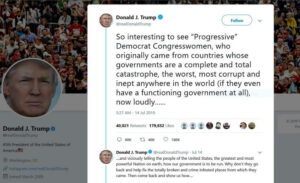 Other Republican lawmakers chided Trump for his comments, while also taking shots at the Democratic lawmakers.

Sen. Pat Toomey (R-Pa.) called Trump “wrong to suggest that four left-wing congresswomen should go back to where they came from.” He added, “I couldn’t disagree more with these congresswomen’s views on immigration, socialism, national security and virtually every policy issue. But they are entitled to their opinions, however misguided they may be. We should defeat their ideas on the merits, not on the basis of their ancestry.”

Sen. Susan Collins (R-Maine) said, “I disagree strongly with many of the views and comments of some of the far-left members of the House Democratic Caucus – especially when it comes to their views on socialism, their anti-Semitic rhetoric, and their negative comments about law enforcement – but the president’s tweet that some members of Congress should go back to the ‘places from which they came’ was way over the line, and he should take that down.”

The four Democratic congresswomen targeted by Trump held a press conference Monday to denounce his comments. Tlaib called his language “a continuation of his racist, xenophobic playbook.”

Pelosi announced an upcoming floor vote in the U.S. House — backed by Reps. Jamie Raskin (D-Md.), Tom Malinowski (D-N.J.) and others — on a resolution to condemn Trump’s language. That measure is certain to put some of Trump’s more moderate GOP allies in a thorny political position.

Pelosi called Trump’s language “disgraceful” and said in a letter to her colleagues, “our Caucus will continue to forcefully respond to these disgusting attacks.”

Rep. Elijah Cummings (D-Md.), chairman of the House Oversight and Reform Committee, told reporters outside of a hearing, “We’ve gotten so used to the president making these kinds of vulgar, racist statements, and I don’t use that word lightly. The question is, what’s going to stop him? And I don’t think anything’s going to stop him.”

Cummings added, “We want a president that brings us together. So Mr. President, I’m not asking you, I’m begging you to stop this, please.”

After the WBAL interview, Harris’ comments were denounced by the Maryland office of the Council on American-Islamic Relations.

“It’s shameful and appalling that a Maryland congressional representative would exploit this dark moment to curry favor with his base by condoning and justifying Trump’s racist tweets,” CAIR Director of Maryland Outreach Zainab Chaudry said in a statement. “Unfortunately, the American people have come to expect tacky, sub-standard communications from this president. But we demand principled leadership, not partisan politics, from congressional and local elected officials who have the capacity to temper his problematic rhetoric.”

“We may differ on issues of politics, but we must be united in our opposition to blatantly bigoted language meant to stoke racial resentment,” Rockeymoore Cummings, wife of the oversight committee chair, said.

Hogan’s office did not immediately respond to the Democratic Party’s news release.

‘It seems like the cat’s got their tongue now,’ U.S. Rep. Jamie Raskin (D-Md.) says about Republicans’ public statements on abortion rights.