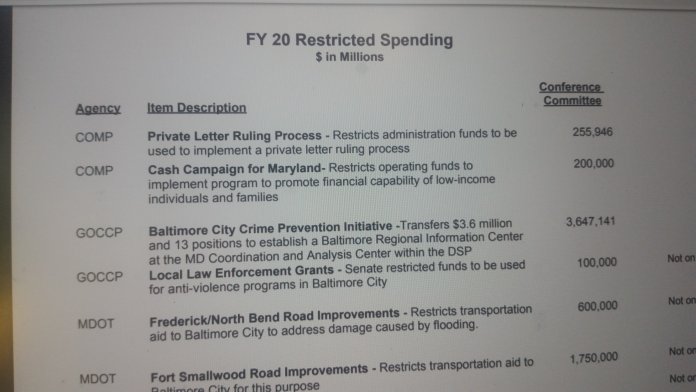 Gov. Lawrence J. Hogan Jr. (R), who regularly contrasts the bipartisanship of the Maryland State House with the toxic partisanship of Capitol Hill, made a direct attack on the Democratic General Assembly Wednesday, announcing that he would not release the millions of dollars for “fenced off” programs that lawmakers were seeking.

Speaking at the start of Wednesday’s Board of Public Works meeting, Hogan blasted the legislature’s “reckless approach” to ordering funding priorities and said the state could not afford to fund the fenced off programs. He cited projections that Maryland could be facing a $961 million budget deficit but pledged that his administration would find sufficient funding to meet the state’s greatest needs.

“We pledged to bring fiscal restraint to Annapolis and we have,” Hogan said. “We must remain vigilant and fiscally prudent and be prepared for volatility in the national economy.”

“It is difficult to express how disappointing this is,” state Sen. Bill Ferguson (D-Baltimore City), the vice chairman of the Budget and Taxation Committee, said in a tweet. “School construction, police tech improvements, adult high schools, Youth Works, etc. all crushed…This news dump before July 4th holiday hurts Marylanders who need it most.”

Lawmakers also pointed out that the budget they adopted created a smaller projected deficit than the budget proposal Hogan originally introduced in January.

As they do most years, legislators this spring fenced-off tens of millions of dollars in state general funds for the 2020 budget year for three dozen legislative priorities, including increased spending on school construction, a fund to help police agencies test more rape evidence kits, grants to the state’s attorney’s offices in Baltimore City and Prince George’s County and a cash infusion for the financially ailing Baltimore Symphony Orchestra. Lawmakers put the price tag of their priorities at about $189 million, but Hogan said Wednesday it was $245 million.

Lawmakers had been pressuring Hogan to announce his intentions for several weeks, but he waited until the third day of the state’s new fiscal year – and the start of a long holiday weekend – to do so.

Hogan called the legislature’s practice of fencing off money in the state budget for key priorities “a shell game gimmick” and blasted lawmakers for ignoring projections showing state revenues diminishing in the months ahead.

“They made false promises to special interest groups that they knew could not and would not be met,” he said.

But in a statement shortly after Hogan’s announcement, Senate President Thomas V. Mike Miller Jr. (D-Calvert) said many of the projects the legislature put on its priority list came from recommendations from Marylanders during budget hearings.

“Based on my conversation with the governor, I was under the impression that he intended to review the list closely and deserving projects would proceed with funding,” Miller said. “The bipartisan budget passed by the Legislature was balanced, and did not alter the structural deficit any differently than in the governor’s originally proposed budget.”

During the Board of Public Workers meeting, state Treasurer Nancy K. Kopp (D), who is the legislature’s representative to the BPW, chided Hogan for taking umbrage with the legislature’s priority list, noting that the budget had been adopted under the usual process and with the regular give-and-take between the executive and legislative branches.

“It’s not the governor’s budget, it’s not the legislature’s budget. It’s the state budget,” she said, later adding, “I regret this impasse.”

In a memo to reporters released shortly after the BPW meeting, Hogan Communications Director Michael Ricci noted that the legislature’s proposals would result in a $90 million cut in the state’s Rainy Day fund along with a $50 million cut in the pension fund, and would add $114 million in new ongoing spending to the budget.

The memo reiterated the governor’s pledge to find sufficient funding for critical programs, even if it resulted in other budget cuts, and said Hogan would reintroduce his school construction funding package in the 2020 General Assembly session.

“As always, we are open to working in a collaborative way with the legislature on our budget,” the memo concluded.

Ahead of Rally for Jan. 6 Riot Defendants, Fences Return Around U.S. Capitol