Gov.-elect Wes Moore (D) completed his metamorphosis from candidate to chief executive-in-waiting Thursday, meeting with the man he’ll succeed in two months and revealing the leaders and framework of his transition team.

“It’s a great day because it’s an actualization of something we’ve talked about for a long, long time,” Moore said during an appearance at the University of Maryland School of Public Policy in College Park, where he announced that Lt. Gov.-elect Aruna Miller (D) will lead his transition effort.

The “transition and transformation” team, as Moore labeled it, will have four co-chairs and will be run on a day-to-day basis by Cleo Hirsch, the executive director for COVID response at the Baltimore City Public Schools.

The co-chairs are Prince George’s County Executive Angela Alsobrooks (D), who also joined Comptroller-elect Brooke Lierman’s transition team on Thursday; Shelonda Stokes, president of the Downtown Partnership of Baltimore; Mary Tydings, Moore’s campaign treasurer who is a longtime executive at a national business executive search firm and is daughter of the late U.S. Sen. Joseph D. Tydings (D); and Ken Ulman, the former Howard County executive who now runs an economic development and planning consulting firm that is partially responsible for the recent transformation of the commercial district of College Park.

“What they each bring to this work collectively is a deep commitment to lift up our communities,” Miller said.

The transition team will also consist of a steering committee of public, private and nonprofit leaders, and will soon add nine policy committees that will help guide the early work of the Moore-Miller administration.

“The idea is, we want to be able to create a team that’s inclusive and reflective of the entire state,” said Miller, a former state legislator and retired civil engineer. She added that the transition team wants substantial input from the public, which it will solicit through town hall meetings and a new website, mooremillermd.com.

“We welcome the feedback of all Marylanders who want to have a voice in the process,” Miller said.

The website also has a portal for people to submit their resumes. 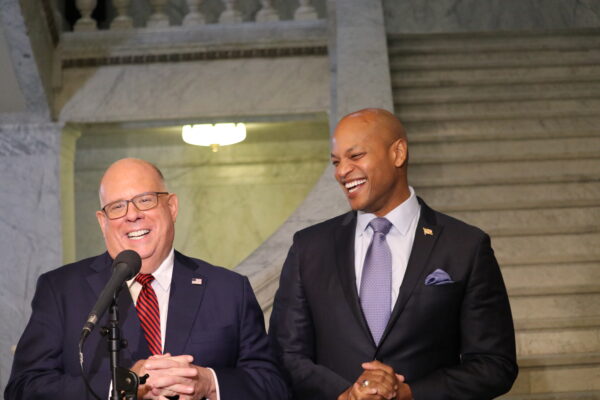 As part of the transition process, Moore traveled to Annapolis on Thursday morning for a 75-minute State House meeting with Gov. Larry Hogan (R). As the current and future governors chatted, Lt. Gov. Boyd Rutherford (R), who has been tasked with leading the Hogan administration’s side of the transition, met with key Moore advisers.

“It’s been a pleasure to get to know Gov.-elect Moore a little bit better today,” Hogan told reporters following the meetings.

Both Hogan and Moore restated their commitment to a seamless transition — a simple, sacred concept of American democracy that can no longer be taken for granted.

“This is the way it should be,” Moore said. “When the governor says we’re going to have a smooth and orderly transition, this is what the people of the state want.” Moore later described his meeting with Hogan as “an important moment for this state.”

Hogan said Rutherford’s team has already prepared a series of detailed briefing books about every government agency for Moore and his advisers to absorb, in an effort to ease the transfer of power.

“I know what it’s like to drink out of a firehose,” Hogan said.

Moore said the preparations Rutherford and his transition colleagues made have already “been key and crucial to our team.”

The two men did not disclose many details about their meeting. While they come from different generations and couldn’t have more different backgrounds, life experiences and worldviews, Moore and Hogan were light-hearted and respectful with each other as they met with a mob of reporters at the bottom of the grand steps in the State House lobby. Both attempted, with mixed success, to deflect in-depth questions about political matters.

Hogan said he looked forward to having Moore and his family for a visit closer to the holidays, when Government House, the governor’s residence, will have festive decorations, “to let them know what their new house is going to look like.”

Both men reflected on the current stages of their lives.

“I’ve got to do some packing and figuring out what to do with my life,” Hogan said, declining to answer whether he plans to run for president in 2024.

Moore noted that he’d been unemployed for a year and a half. “This has been the world’s longest job interview, with 6 1/2 million hiring managers.”

Hogan joked about Moore moving into a construction zone — the historic State House dome is under wraps as it undergoes repairs, and Lawyers Mall, the plaza in front of the State House, is partially closed off now that the Legislative Services Building across from the State House has been razed to make way for a newer version.

Hirsch, the new day-to-day leader of the Moore transition team, has been an official with the Baltimore City Public Schools since 2018, and led the district’s COVID-19 response for the past year. She has also been an educational policy consultant at the Center for Public Research and Leadership at Columbia University’s law school, a mayoral fellow in the Chicago mayor’s office, and a school teacher in New York City. She has a Masters degree in Public Affairs from the Princeton School of Public and International Affairs. 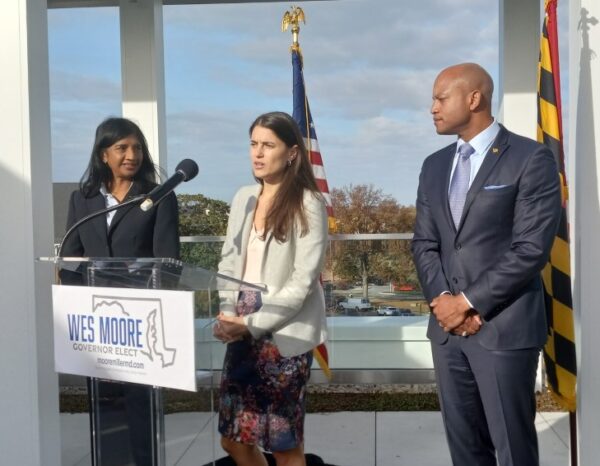 Gov.-elect Wes Moore and Lt. Gov.-elect Aruna Miller listen as Cleo Hirsch, who will run their transition team, speaks at the University of Maryland School of Public Policy Thursday. Photo by Josh Kurtz.

Hirsch said the Baltimore school district’s “robust” handling of the COVID crisis would inform her work on the transition team.

“I plan to bring that organizational process, that ability to act quickly, that inclusivity, to this position,” she said.

On its new website, the transition team announced the members of its steering committee. They are: