With Montgomery County elections officials gearing for a recount in the race for county executive, incumbent Marc Elrich expressed confidence that his win over fellow Democrat David Blair will hold.

In an interview, Elrich said he’s looking forward to tackling the county’s challenges — and working with an almost all-new county council — in his second term.

The 0.03% margin between the two men — 55,497 votes for Elrich; 55,462 for Blair — fell well within the 0.25% threshold set by state law for a free recount. Blair, as expected, filed a formal petition on Tuesday for a full manual recount of all votes cast. 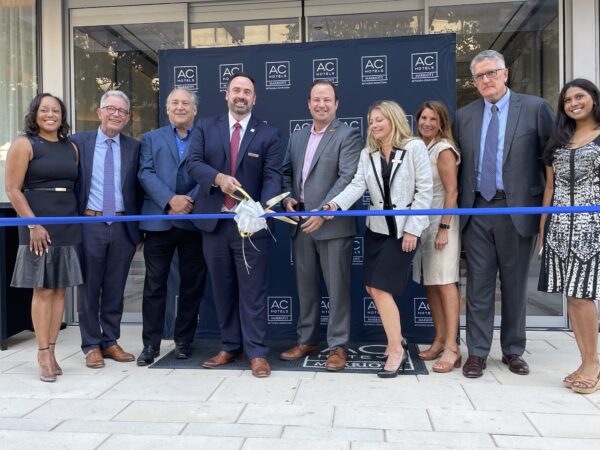 Elrich, in the meantime, predicted that he will emerge as the Democratic nominee. “My gut says that he doesn’t find 35 votes. … I expect no more than a five-vote fluctuation either way out of a recount.”

Pressed on whether he intends to shake things up following a Democratic primary in which 60% of Democrats chose someone else, Elrich said he intends to stick to his current course — working to boost transit, lure jobs, and boost the county’s stock of affordable housing.

“You can’t look around this county and not see cranes and businesses moving in here,” he said following a ribbon cutting for a new hotel in downtown Bethesda. “I feel pretty good about the direction we’re in.”

He said his biggest regret is not communicating the county’s accomplishments more effectively.

“We just did not do a good job of messaging,” he conceded. “Anybody that knows me knows that I’ve never focused on advertising myself.”

Elrich said he knew for four years that at least one — and perhaps two — members of the county council would end up running against him this year. With a wave of newcomers set to join the panel, the executive said he’s looking forward to a starting the new year with a clean slate. 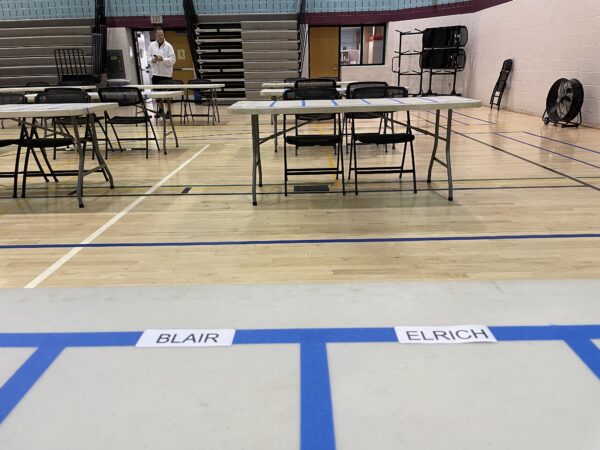 Fifty tables and 100 chairs have been set up for the Montgomery County recount. Photo by Bruce DePuyt.

The recount will begin on Friday morning. It will be held on the basketball court of the Germantown Community Center.

Elections office workers finished setting up 50 tables and 100 chairs on Tuesday afternoon. Each table has taped areas cordoned off for Blair’s votes, Elrich’s, and those that went to other candidates.

Gilberto Zelaya, a spokesperson for the Montgomery County Board of Elections, said it’s difficult to predict how long the recount will take. “We will use the first day, that Friday, as the benchmark, to see how many days it will take for recount,” said Zelaya. “That’s the million-dollar question.”

The board will work through the weekend, he said.

The 2018 recount in the county executive primary race between Blair and Elrich involved a sample of about 15,000 ballots; it took approximately one day and Elrich’s lead shrank by two votes, with him ultimately winning the contest by 77 votes.

The Blair-requested recount this year will require going back over more than 140,000 ballots.

Elections personnel from neighboring jurisdictions are being recruited to staff the recount. The public is invited to watch — in person or online via the board’s livestream.

The winner of the Democratic primary will face Republican Reardon Sullivan, the former chair of the county GOP, in November.

The Frederick County Board of Elections conducted a recount in a county council race on Tuesday and ended up with the same result they got last week — a one-vote win for challenger Jazmin Di Cola over incumbent M.C. Keegan-Ayer in the Democratic primary.

Keegan-Ayer, who is currently the county president, was seeking her third term. Di Cola is a community activist.

Keegan-Ayer successfully sued to have Di Cola declared ineligible for the District 3 seat because she moved to District 1 last year. The county charter requires potential candidates to live in the district they wish to represent for 12 months prior to an election.

A Circuit Court judge ruled against Di Cola following an all-day hearing on Friday. Because of that ruling, the county elections board has been barred from certifying Di Cola’s win.

The central committee has until the end of the day Friday to make its decision. Committee Chair Deborah Carter said a nominee will be chosen on Thursday evening.

Di Cola, who did not respond to a request for comment following the recount, indicated on social media over the weekend that she intends to appeal last week’s court ruling to the Maryland Court of Appeals.

In light of the court’s ruling, it’s unclear whether Di Cola was eligible to cast a ballot in the District 3 race — a big issue given her one-vote margin of victory. Loftus said he expects that issue to arise at the board’s next session, on Wednesday.

“That will be something for the board to deliberate,” he said. “And then if the board wanted to, they would forward that on to the special prosecutor.”

In a statement late Tuesday, Keegan-Ayer thanked her supporters, and she said the recount showed that the county’s electoral system “operates with integrity and can withstand intense scrutiny.”

She made no mention of Di Cola, nor did she concede. She left open the possibility that she will seek to be the central committee’s appointee.

“I want to thank my many friends and supporters who have reached out to me over the past few weeks to provide encouragement, support, and to send exceedingly kind thoughts and words,” Keegan-Ayer wrote. “I am going to think about whether to apply to the (Democratic Central Committee) nomination process, but I will decide by the deadline.”

“Now, is a time for healing,” she added, “and I commit my energy and effort to support that healing and unity.”