Undaunted by the refusal of the legislature’s presiding officers to consider a special session, Comptroller Peter Franchot (D) again urged state leaders on Thursday to suspend collection of the state’s gas tax.

Skyrocketing fuel prices have made driving and many consumer staples more expensive, forcing lower-wage families into difficult decisions. “People are having to choose between a gallon of gas and a gallon of milk,” Franchot said during a news conference at a Baltimore gas station.

He noted that President Biden and Hogan have also advocated for gas-tax relief. “We need to do something. We have a mandate. We cannot afford inaction.”

Franchot’s news conference was branded as an official government event sponsored by the comptroller’s office. But with a full bank of TV cameras at the gas station, it will undoubtedly benefit his gubernatorial campaign.

Because of the federal stimulus Maryland and other states have received, the expenditures and sales tax holiday are affordable, Franchot declared.

Based on the number of people who qualified for state stimulus payments, Franchot estimated that the aid checks, which would be one-time payments, would cost about $900 million.

The gas tax holiday would cost $100 million per month in lost revenue, though some of that would be offset by increased sales to out-of-state motorists.

At Thursday’s news conference, the comptroller’s office invited community leaders to discuss the impact high fuel prices are having on workers. “We have seen record numbers of people who are now needing food, coming to us now for assistance with paying their utilities,” said Rodney Hudson, a minister. “More people are facing homeless situations.”

Franchot made a similar pitch during the freewheeling opening portion of Wednesday’s Board of Public Works meeting, when participants opine on topics of their choosing. He was quickly rebuffed by the General Assembly’s presiding officers, Senate President Bill Ferguson (D-Baltimore City) and House Speaker Adrienne A. Jones (D-Baltimore County).

“The Maryland General Assembly already did exactly what President Biden is proposing at the federal level: implemented a temporary pause on the State gas tax while backfilling our Transportation Trust Fund to ensure maintenance of our roads and bridges,” they wrote.

“States cannot unilaterally bear the burden of increased gas prices driven in part by Putin’s aggression in Ukraine and in part by the corporate greed of oil companies bringing in record profits.”

Franchot said opponents of his approach are suffering from “a lack of political will.”

“We need to stop that political finger-pointing, political footballs that are out there,” he said. “And we need to focus on the people that are suffering right now.” 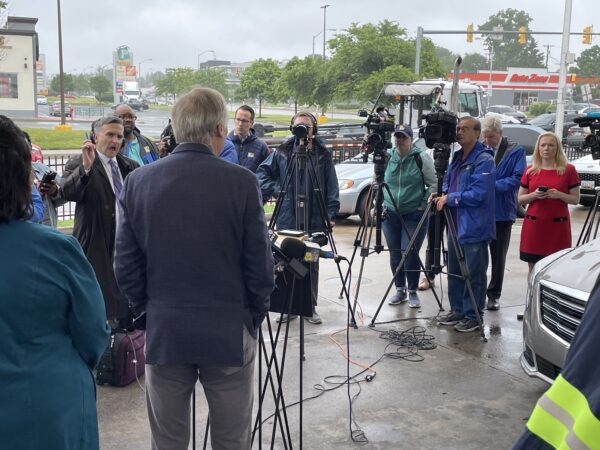 For the second time in as many days, Franchot claimed that motorists are increasingly running out of fuel on Interstate 95 because they’re struggling to afford gas. A Maryland State Police spokeswoman said the agency does not keep track of calls it receives from people who run dry on the highway.

A group of Republican state lawmakers on Thursday joined the call for a special session to tackle rising fuel prices. They were joined by congressional hopeful Yuripzy Morgan (R), a former WBAL Radio talk show host.

Speaking on Lawyers Mall in Annapolis, Morgan said “it is a heck of a day when you have President Biden agreeing with Republicans in Maryland that Marylanders are paying too much in gas tax.”

Morgan, one of five Republicans running in the July 19 primary for the right to go up against incumbent Rep. John Sarbanes (D). “This is an issue that requires a state and federal partnership,” she said.

Republican gubernatorial hopeful Kelly Schulz, the state’s former commerce secretary, issued a press release on Wednesday calling the General Assembly “cowardly” for making gas tax increases automatic by law in 2013, rather than making them to have to vote on whether to increase the tax. Unlike Franchot, however, she appeared to let the matter drop on Thursday, to the dismay of several high-ranking top GOP strategists.

Editor’s Note: This story was updated to clarify that the number of Maryland residents who would be eligible for Franchot’s proposed stimulus checks was based on how many people were eligible for prior state, not federal, stimulus payments.