If the State Highway Administration’s plan to add toll lanes to the Capital Beltway and Interstate 270 is the subject of future litigation, as many expect, those lawsuits will be based on a just released document, a Federal Environment Impact Statement (FEIS), according to a top planning official in Montgomery County.

The long-awaited document, years in the making, was released jointly Friday by SHA and the Federal Highway Administration. The 26,000-page FEIS represents an update to two earlier documents, a draft version and a supplemental, that county planners and the project’s many backers and foes have been skirmishing over for some time.

It represents the government’s assessment of how the state’s plan to add variably-priced toll lanes to the two highways, along with the reconstruction of the American Legion Bridge, would impact the environment, stormwater, traffic flows, social inequities, historical sites, surrounding communities, neighborhood parks and more.

Its release comes as federal officials weigh whether to approve Republican Gov. Lawrence J. Hogan Jr.’s proposal to widen the frequently-congested highways. The project, being done in tandem with Virginia and Maryland’s chosen concessionaire, Transurban, represent a top priority for the outgoing governor. A “record of decision” is expected from the federal government in mid-August.

“It provides the basis for making a final decision,” said Montgomery County Planning Board Chair Casey Anderson. “It also gives opponents of the project a fixed target to challenge that assessment.”

The report evaluated a study area running from a point south of the George Washington Parkway/I-495 interchange in Virginia along the Beltway into Montgomery County, then north along I-270 to I-370. Hogan proposes four variably-priced toll lanes, two in each direction, in that stretch. Existing lanes would remain free, though a carpool lane along the western I-270 spur would be converted to a toll lane. 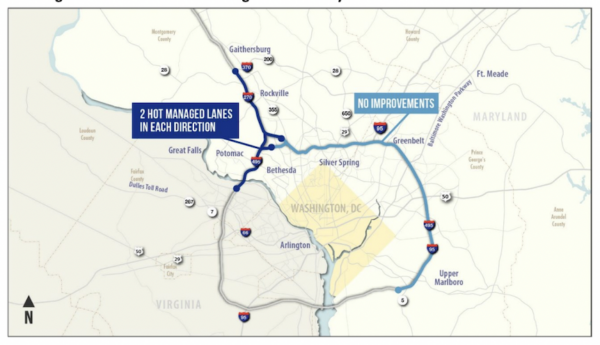 State Highway officials said they evaluated 5,000 comments that were submitted by the public and that many of the suggestions they received helped reshape the estimated $4 billion project. They cited the decision to allow transit vehicles and cars with at least three occupants to use toll lanes free of charge, a refocusing of the project to “prioritize” the reconstruction of the aging and frequently bottlenecked American Legion Bridge, the addition of a bike and pedestrian trail on the bridge, and reduced impacts on parkland and historic sites. In addition, the project no longer calls for the taking of homes or businesses.

Although many steps were taken between the draft and final environmental studies to mitigate impacts, the toll lanes would still have a “direct” effect on 361 properties, the report found. More than 450 acres of forest canopy, nearly 1 million square feet of waterway, 55 acres of “rare, threatened and endangered species habitat” and 163 acres of “unique and sensitive areas” would also be impacted.

Analysts concluded that toll lanes would provide “meaningful operational benefits” to commuters and that users of both the toll lanes and the existing lanes would experience reduced travel-times.

Traffic impacts on roads that feed I-270 and the Beltway would be mixed, the report found. The state’s chosen design would reduce delays by 4.8% on the arterials, “despite some localized increases in arterial traffic near the managed lane access interchanges.”

Not moving forward with toll lanes, the report concluded, would cause “slow travel speeds, significant delays, long travel times and an unreliable network” in the future. Montgomery County is home to many large employers, and many residents of the Washington, D.C., suburbs commute to jobs in D.C. and Northern Virginia. (Virginia began installing “managed” lanes a decade ago. Transurban’s U.S. headquarters is in Tysons Corner.)

Emmet Tydings, cofounder of the Suburban Maryland Transportation Alliance, called the FEIS “a big win because it addresses all of the biggest sticking points and wish list [items] that individuals and groups have been asking for the last couple years.”

“There is $500 million for mass transit, zero homes and businesses taken, a Bike/Ped feature on the [bridge] connecting to the C&O canal path, total avoidance of the Morningstar Cemetery, 90% less impact on Plumbers Island, more stormwater management enhancements, and the FEIS exceeds the original project goals of congestion reduction and increased travel times,” he said in a statement.

A coalition of environmental and civic organizations fired off a request to U.S. Transportation Secretary Pete Buttigieg, just hours after the report was released on Friday, calling the state’s analysis of future greenhouse gas emissions and environmental justice impacts inadequate.

“An outright rejection of the Managed Lanes Study is appropriate given the failure of the Maryland Department of Transportation to meet federal requirements,” the groups wrote. “But at the very least, we urge the USDOT to require that a complete and correct [supplemental draft environmental impact statement], with a 90-day public comment period, be issued to address deficiencies.”

An MDOT spokesman said the state’s analysis was conducted “in full compliance with federal requirements.”

The FEIS released on Friday is open to public comment for 30 days. Critics say a month is not nearly long enough, given the length and complexity of the report.

Lawsuits are considered a certainty. Even if they are unsuccessful, they could eat up time the term-limited Hogan doesn’t have. A firm that bid unsuccessfully on the toll lanes project has sued the state and that trial is expected to begin this summer. In addition, Transurban has yet to find a construction firm to replace the one that left its consortium, Accelerate Maryland Partners, nearly a year ago.

Even if MDOT and Transurban are able to hammer out an agreement, observers say, it will be difficult to get a construction contract to the Board of Public Works before Hogan’s term ends.

Anderson, Montgomery’s planning chief, said the release of the FEIS doesn’t guarantee that federal officials will approve the plan. But he said few projects get this far without getting a green light.

“In practice, they wouldn’t have brought a project this far forward in the process… if they didn’t have a pretty good idea of what they wanted to do,” he said.

In 2017 Hogan proposed adding toll lanes to the Beltway between the I-270 spurs and Maryland Route 5 near Oxon Hill. That stretch is now listed as “No Improvements,” though Transurban’s CEO has said repeatedly the company’s goal is to have “express lanes” on the entire Beltway. The northern section of I-270, from Montgomery Village to I-70 in Frederick County, another original Hogan priority, is part of a separate environmental analysis that won’t be completed until long after he leaves office.