Waldstreicher and his challenger, progressive organizer Max Socol, appeared at a virtual forum, along with the three Democratic candidates for the House of Delegates in District 18, sponsored by the District 18 Democratic Caucus.

It was an awkward construct: Waldstreicher and Socol are running against each other, whereas Dels. Emily Shetty and Jared Solomon, along with Aaron Kauffman, who was added to the ballot by the Montgomery County Democratic Central Committee after Del. Al Carr withdrew from the race at the last minute to run for county council, face no opposition in the July 19 Democratic primary for three House seats. Still, they all answered the same series of questions over a period of 90 minutes, on issues like affordable housing, climate change, widening the Capital Beltway, crime, and more.

This was the first time Socol and Waldstreicher have appeared together as candidates, in person or on Zoom, even though Socol launched his challenge last fall, deeming the first-term incumbent insufficiently progressive. Both tried to position themselves as crusading liberals during the forum, though Socol occasionally criticized Waldstreicher for not staking out progressive positions or for the failure of the General Assembly to adopt activist proposals on climate change, corporate taxation and greedy landlords.

Waldstreicher completely ignored Socol and his parries, and instead cast himself as a steadfast fighter against conservative policies coming from the federal government.

“Maryland is making progress,” Waldstreicher said. “But the MAGA Republicans and the right-wing Supreme Court are nothing if not relentless. So the work continues.”

Although many of Socol’s supporters loathe Waldstreicher there was little evidence of that during the opening and closing statements and the questions supplied by Bethesda Beat’s Steve Bohnel. Socol jabbed at Waldstreicher a few times, but the senator, who spent three terms in the House before being elected to the Senate in 2018, simply did not engage. 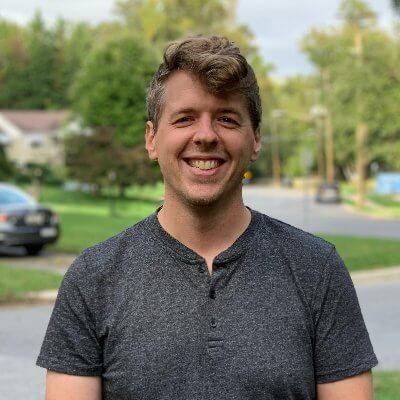 Max Socol, a Democratic candidate for the Senate in District 18. Campaign photo.

Socol described his work as a senior organizer for the progressive Jewish organization Bend the Arc, and said he was a co-founder of the Silver Spring Justice Coalition. He noted that District 18 is a progressive area that has produced such leaders as U.S. Sen. Chris Van Hollen and former state lawmakers Sharon Grosfeld and Ana Sol Gutierrez (the latter two have endorsed him). Progressive Maryland, the immigration rights group CASA in Action and six former presidents of the Montgomery County Women’s Democratic Club are also supporting Socol.

“The coalition [of supporters] reflects the kind of leadership that District 18 needs,” he said.

Socol said he favored social housing programs and rent stabilization to provide protections for low-income renters, and faulted the legislature for refusing to consider these measures. He also accused Waldstreicher of going along with a Republican proposal to reduce some tenant protections by a month during the COVID-19 pandemic.

“You’re the vice chair of that [Judicial Proceedings] committee,” Socol scolded. “It didn’t have to happen.”

In a similar way, Socol criticized the legislature — and Waldstreicher by extension — for failing to stop Gov. Lawrence J. Hogan Jr.’s plans to widen the Capital Beltway and Interstate 270, for capitulating to utilities during the most recent debate on climate legislation, and for failing to adopt a measure that would tax corporations more.

“You’re not there to fight for us,” Socol told Waldstreicher while discussing Hogan’s highway proposals.

But in Waldstreicher’s telling, the fights have already been joined and he can be the closer in the years ahead.

Waldstreicher rattled off a list of tenant protections bills he’s sponsored or co-sponsored — some of which were vetoed by Hogan this year.

“You have my word that we will fight again to pass these bills,” he said. “And with your help, we will have a Democratic governor next year.”

Asked what he would do to fight crime, Waldstreicher talked about legislation combating gun violence, including a bill that stalled to lessen the possibility that children would come into contact with a gun (“It will pass next time,” he vowed), and a measure that would have enabled victims of gun violence to sue gun manufacturers (“You have my word that next session we will pass this legislation,” he said).

Waldstreicher touted legislation that passed to make ghost guns illegal in Maryland, but Socol said it should have passed sooner.

During a discussion on bike lanes and pedestrian safety in the 18th District, Waldstreicher mentioned legislation he had sponsored with Del. Lorig Charkoudian (D-Montgomery) called the SAFE Roads Act.

“You have my word that this is not the end of it,” he said. “…I have every expectation that we will get it past the goal line in 2023.”

Waldstreicher said the battles he’s waging in Annapolis are personal to him — because his three kids are going to have to grapple with the devastation wrought by climate change, because his wife is from Buffalo, N.Y., and knows the supermarket where elderly Black residents were slaughtered by a racist gunman, and because he met an elderly Black couple who live near the Beltway and could see their home razed if the road-widening plan goes into effect.

“Tonight has been a wonderful opportunity for us to talk about our shared values as Democrats,” Waldstreicher said at the forum’s conclusion.

Socol said the forum produced “a list of reasons why we couldn’t get things done in the Maryland Senate.”

Waldstreicher hadn’t filed his latest campaign finance report as of late Monday — it’s due Tuesday night — but in mid-January he reported $430,663 on hand after raising $235,348 in the previous year.