Editor’s note: This is the latest installment in Maryland Matters’ “Climate Calling” project. To read previous stories, click here. To read about the project, click here.

But placing large solar arrays and other renewable energy installations on farms isn’t always easy, and projects can encounter environmental, political, regulatory, institutional and aesthetic opposition — or resistance from the landowners themselves.

“Land use is a super dynamic issue, and it’s one of the top obstacles that renewable energy faces,” said Nichole Chiappa, interim executive director at the Chesapeake Solar & Storage Association, an industry trade group for Maryland, Virginia and Washington, D.C.

Yet in Howard County, where government leaders rolled out an ambitious solar energy plan earlier this summer, officials, advocates and renewable energy industry executives say they are solving the puzzle — with buy-in from the farmers themselves — and believe their plan can become a model for local governments across the state and in the Mid-Atlantic.

“This fits what I’ve been working on since we got in — becoming leaders on combating climate change,” County Executive Calvin Ball (D) said in a recent interview. “It helps ensure that we have clean solar power here — and we’re setting an example. It really is leading the way for the state.”

Howard County’s solar plan envisions the government generating more than half of its energy needs from the sun within about two years. To accomplish that, over the next several months, the county government will place 11 solar arrays in parking lots, on office building and fire station and county jail rooftops, at a landfill — and, initially, on three privately-owned farms. By the Ball administration’s estimates, the solar project is the equivalent of taking more than 6,700 cars off the road every year.

The county government is working with CI Renewables, a New Jersey-based contractor, to erect the solar installations — and the first could be on farmlands sometime this fall. The company will, at no cost to the county, build, operate and maintain the solar panels and associated generating operations and will lease the farmland that is being used as part of the project. In exchange, CI, which outbid four companies to win the Howard contract, will charge the county for the electricity the solar panels generate — an agreement similar to one government agencies reach with other energy suppliers.

The county government contract with CI Renewables lasts 25 years with a five-year option; those 30 years match the lifespan of a typical solar energy installation.

At a time when many farmers are under pressure to sell their land to real estate developers, supporters of this plan see a double environmental benefit: Greater solar energy use, and a way to maintain rapidly disappearing farmland.

Teresa Stonesifer’s family has run Triple Creek Farm, a cattle and wheat operation in West Friendship for over 85 years. Like so many farms in central Maryland, Triple Creek has been pounded in recent years by extreme heat, historic flooding, tornados, insect infestation, and the limitations brought on by local preservation laws and the farm’s proximity, as the name suggests, to three bodies of water.

But as county officials spread the word about their solar ambitions, which began with legislation Ball sponsored five years ago when he was still on the county council — and sought farmers who were willing to participate in the program — Stonesifer, who runs the farm with her sister and other relatives, began to see the possibilities.

“We’re limited by what we can do with crops and livestock to get out of the red,” she said. “I thought, maybe this is something we can make a go of.”

Joshua Smith, senior vice president of CI Renewables, who is managing the Howard County project, put it this way: “Farmers’ work is getting more difficult because of climate change. This is predictable income for them.”

The solar panels will be spread over 27 1/2 acres of Stonesifer’s farm — roughly one-quarter of its agricultural land. But she won’t be sacrificing any farm operations for the solar panels. CI Renewables, is using what are known as “agrovoltaic” solar panels that rest, on platforms, six feet off the ground.

This enables livestock to continue feeding and watering underneath the panels. About half the land under the panels will be hay, the other half will be grass, though that’s mostly for the animals’ consumption — the commercial harvest will be elsewhere on the farm.

There will be abundant shade, and with ample space to create watering holes under the arrays. And the technology is conducive to pollinators, meaning bees, which are becoming increasingly endangered, will be able to thrive — another potential source of activity and revenue for the farm.

“It’s like a commodity,” Stonesifer said. “We still do cattle, we still do crops. Now we’re going to farm the sun.”

‘The benefit of diversification of their farms’

Maryland’s current clean energy goals require the state to power its grid with 50% renewable energy by 2030. The state must hit 14.5% solar energy usage by 2028.

To help achieve this goal, according to a report prepared a year ago by the Governor’s Task Force on Renewable Energy Development and Siting, anywhere from 7,766 acres to 33,033 acres of farmland in Maryland will be needed to accommodate solar installations. That’s between 0.4% and 1.7% of all agricultural land in the state — and anywhere from 0.7% to 2.9% of what the task force characterizes as “prime” ag land in the state.

But the concept of installing large-scale solar arrays on agricultural land remains a controversial proposition.

Earlier this year, following a year of debate, a divided Montgomery County Council approved a zoning amendment that only allowed for a limited expansion of solar installations in the county’s vast agricultural reserve.

That move brought a rebuke from state Del. Kumar P. Barve (D-Montgomery), the chair of the House Environment and Transportation Committee, who said “talk is cheap” in a Washington Post commentary.

“This is not the ‘radical change’ the county called for back in 2017, when it declared a climate emergency,” Barve wrote. “As a legislative leader who has studied and worked on environmental issues over many years, I can tell you that Maryland doesn’t have time to wait, as fossil fuel use is the primary culprit behind climate change. Also, let me be clear once and for all: Ground-based solar is the most cost-effective clean-energy alternative here.”

Similarly, Baltimore County leaders have encountered opposition to proposed solar projects on agricultural land — though County Executive John A. Olszewski Jr. (D) earlier this year announced that the county would seek to use 100% carbon-free energy sources by 2026.

As a result, Joshua Feldmark, director of community sustainability for Howard County, says he’s heard from envious counterparts in surrounding jurisdictions who are impressed that Howard is forging ahead with its solar expansion — and utilizing farmland to achieve it.

Feldmark said that residents are becoming more comfortable with seeing large solar arrays on parking lots or at commercial developments, but that there’s still a stigma associated with siting them on agricultural land.

“It’s actually just an aesthetic,” he said. “It’s when neighbors say, ‘I want to look at a Norman Rockwell picture.'”

Ball said the cooperation and support of Howard County farmers has been key to building support for the solar arrays on agricultural land.

Partnering with farmers, he conceded, can lead to “difficult conversations” at times. But increasingly, “farmers in Howard County recognize the benefit of diversification of their farms.”

“I think it takes courage to do the big things,” Ball added.

Chiappa, from the Chesapeake Solar & Storage Association, credited Howard County for its commitment to “winning the hearts and minds” of residents when it comes to the siting of solar installations. And she predicted that they will discover that “solar is a good neighbor.”

And what will Stonesifer’s cows, sheep and goats think of the massive solar panels when they’re installed on the farm later this year? She paused a minute to think, then let out a chuckle.

“It’ll get their attention for a little bit,” she said. “But like everything, I think they’ll get used to it.” 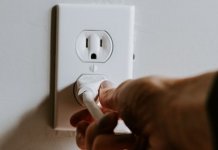 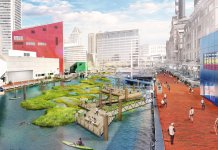