The U.S. has its first fully approved vaccine against COVID-19, with federal health officials announcing Monday the approval of Pfizer-BioNTech’s two-dose vaccine.

The green light from the U.S. Food and Drug Administration to move Pfizer’s vaccine from emergency use to full approval is a milestone in the national pandemic response, and one that comes as the country battles another surge in infections and hospitalizations due to the delta variant.

The Pfizer vaccine is the only one of the three shots being used under an emergency authorization so far to gain the FDA’s full approval. Moderna also has submitted an application for full approval, while Johnson & Johnson has said it will do so for its one-dose shot by the end of the year.

The approval represents a lightning-speed process at the FDA, which condensed a review process that typically would take roughly eight months in just three months.

As they sought to conduct that approval at a much faster pace due to the pandemic, public health officials also attempted not to undermine confidence among those who have said they were waiting to see the agency give a full sign-off before getting a jab.

“The moment you’ve been waiting for is here,” President Biden told Americans during a news conference Monday afternoon. “It’s time for you to go get your vaccination, and get it today.”

The vaccine’s full approval also may mean more Americans will be required to receive a vaccine in order to attend school, go to work, go out to eat, or attend concerts and other large-group events.

Members of the military are the latest to be subject to a vaccine mandate. Pentagon officials said Monday that a timeline for the new requirement is under discussion.

Gov. Lawrence J. Hogan Jr. (R) was among the Maryland political leaders who hailed the FDA announcement Monday and expressed hope that the infection rate would decline as individuals who have been hesitant to get the vaccine would finally come around.

Hogan called the FDA decision “a major first step,” and said he hoped the Biden administration would move quickly to approve the Moderna and Johnson & Johnson vaccines and also authorize vaccinations for children between the ages of 5 and 11.

“We want to thank federal officials for authorizing full approval of the Pfizer vaccine, which is something we have been pushing for over the last several weeks,” Hogan said. “For people who are still hesitant about getting the vaccine, this is an assurance that it has met the most rigorous standards for safety and effectiveness.”

Separately, through his national political organization An America United, Hogan announced Monday that he had written a letter to Biden urging him to take further steps to make COVID vaccines more readily.

Hogan said on Sunday that he had a third dose of the Pfizer vaccine last week.

Some of the Democrats seeking to succeed Hogan in 2023 are pressing the governor to take more aggressive action to combat the virus at home.

Jon Baron, a policy analyst who is seeking the Democratic gubernatorial nomination, called on Hogan to require COVID vaccination or weekly testing for all Maryland public school students aged 16 and over, and to require vaccination for all school staff.

“At this time, almost all COVID hospitalizations and deaths are preventable,” Baron said. “Vaccines are extremely effective at preventing serious illness or death from this disease. We should use every tool at our disposal to get more Marylanders vaccinated.”

Another Democratic candidate for governor, Tom Perez, called on the state to require masks for all public school students in addition to vaccination mandates.

“Hospitalizations of children are on the rise, and as parents prepare to send their children back to school, it is critical that our state step up and enact additional protocols to protect our children and school employees from COVID-19 and further hospitalizations,” Perez said.

Pfizer shot to be marketed as Comirnaty

The Pfizer vaccine was the first of the three current COVID-19 shots to receive emergency approval in mid-December. Initially authorized for those 16 and older, that authorization was expanded in May to include shots for those 12 through 15 years of age.

Monday’s approval changes the status for the shot’s use in those 16 years and older. While the vaccine will now have a new brand name — Comirnaty — nothing about the vaccine formula itself has changed.

The process involved significant data reviews, examining hundreds of thousands of pages of information from the clinical trials and visits to sites where the vaccine was studied and produced. Peter Marks, director of FDA’s Center for Biologics Evaluation and Research, told reporters that more than half of the clinical trial participants have been tracked for any safety concerns for at least four months, and 12,000 have been followed for six months.

The full approval does not yet extend to vaccines for those between 12 and 15 years old, who can still receive Pfizer shots through the emergency-use authorization.

Pfizer also is expected to apply this fall for using the vaccine in those under age 12, who are not yet eligible for any of the COVID-19 vaccines.

Federal regulators also have approved a third booster dose of the Pfizer shot for those who are immunocompromised. Additional boosters are likely to be approved for the broader population, beginning eight months after a second dose, but regulators at the FDA and Centers for Disease Control and Prevention have not yet set dates for approving those boosters.

Nationally, vaccination rates, which had lagged since a spring peak, have been rising again, with 62% of those over age 18 now fully vaccinated. Six million shots have been administered in the last seven days, marking the highest seven-day total in a month and a half, Biden said Monday.

Hogan said Sunday that 80% of Marylanders have had at least one dose of the vaccine.

Those rising numbers come as the delta variant has wreaked havoc across the country, filling hospital beds and causing a rise in pediatric admissions due to COVID-19. The vast majority of those hospital admissions are among Americans who have not yet been vaccinated.

Among those who have not received a COVID-19 vaccine, three in 10 said in a June tracking survey by Kaiser Family Foundation that they would be more likely to get vaccinated if one of the vaccines authorized for emergency use were to receive full approval from the FDA.

The National Governors Association praised the FDA’s approval in a statement Monday, calling it “another tool that will help combat hesitancy.”

“We have heard from many of our residents as we have traveled across our states and territories, held town halls, and met with residents, who are hesitant to get vaccinated because they are awaiting full approval of the vaccines,” said Govs. Asa Hutchinson (R) of Arkansas and Phil Murphy (D) of New Jersey, who lead the NGA, adding that the approval helps to address some objections and safety concerns.

As he urged unvaccinated Americans to get their shot, Biden on Monday also praised governors, mayors and companies that have required their employees and patrons to be vaccinated against COVID-19.

The full approval of Pfizer’s shot may spur an uptick in vaccine requirements in the public and private sector, which in turn may help drive up vaccination rates, said Dr. Mark McClellan, a Duke University health policy expert and former FDA commissioner.

“While we already had a number of businesses, schools, entertainment venues requiring vaccination or proof of a negative test or something like that, those numbers are going to go up significantly,” McClellan said. “That probably is going to drive the bigger impact of the full approval on vaccination rates in this country, probably even more than the remaining people who are having doubts and potentially willing to be convinced.” 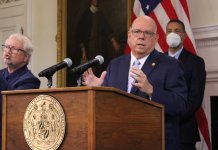