State Comptroller Peter V.R. Franchot (D) on Tuesday received the first major endorsement of his 2022 bid for governor: the backing of the Mid-Atlantic Region of the Laborers’ International Union of North America (LIUNA).

In a statement, LIUNA Vice President and Mid-Atlantic Regional Manager Dennis L. Martire said the union, which mainly represents construction workers, vowed to “stand shoulder-to-shoulder with him throughout this critical campaign.” 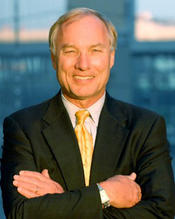 “Over his 14 years as comptroller, Peter Franchot has proven that he is not one to shy away from fighting for Maryland’s working families,” Martire said. “He is a man of his word, and he has already committed to expanding pathways to the middle class for working Marylanders. We are proud to endorse him for governor.”

The early endorsement seems at least in part like a gambit by the union to push Franchot to support a so-called Project Labor Agreement ― when the government awards contracts for public construction projects exclusively to unionized firms ― as the state moves ahead with plans to build a new American Legion Bridge and widen the Capital Beltway and Interstate 270. Republicans are generally not fond of such requirements, and as the project moves forward, key votes will take place on the Board of Public Works, where Franchot serves with Gov. Lawrence J. Hogan Jr. (R) and Treasurer Nancy K. Kopp (D).

The Franchot campaign said the comptroller has used his perch on the Maryland Board of Public Works to advocate for state-funded construction projects that pay a living wage and offer family health care coverage, pushed community benefit agreements for raising labor standards while proudly advocating for building with skilled union labor.

“When I’m elected governor I will have labor’s back, because workers deserve a governor who’s not afraid to fight for economic justice, no matter how powerful the opponent,” Franchot said. “As we work to rebuild our economy after the pandemic, it is imperative labor has a seat at the table when decisions are made.”

LIUNA represents more than 3,000 workers in Maryland and about 40,000 in the Mid-Atlantic region.