In a statement, the caucus said Minority Leader J.B. Jennings (R-Harford) and Minority Whip Stephen S. Hershey Jr. (R-Upper Shore) would not seek reelection to their leadership posts this fall.

“After six years of serving this Caucus as its Leader and Whip, we are incredibly proud of the work we have done to support our party, our members, our constituents and the people of Maryland,” Jennings and Hershey said in a joint statement. “We have accomplished a great deal, and we believe now is the time to allow a new team to build on this success and lead our caucus into the 2022 election season.” 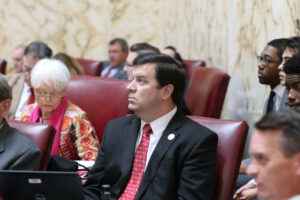 In recent weeks, there have been whispers that Jennings and/or Hershey could face challenges for their leadership posts from more conservative colleagues; their decision to step down may forestall internecine warfare.

Simonaire and Hough would represent a perceptible shift to the right compared to Jennings and Hershey ― and their likely ascension represents an attempt by conservatives to flex their muscle within the 15-member caucus and in the Senate chamber. 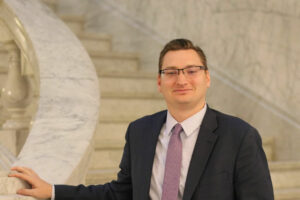 Simonaire is a vocal opponent of abortion rights and does not shy away from debates over social issues on the Senate floor, even when defeat is inevitable. Hough has been an influential conservative on the Senate Judicial Proceedings Committee who has helped steer legislation on criminal justice and has led successful Republican charges to amend legislation on the Senate floor. In his day job, Hough works as chief of staff to U.S. Rep. Alex Mooney (R-W.Va.) on Capitol Hill.

Jennings in particular was close to former Senate President Thomas V. Mike Miller Jr. (D-Calvert), who gave up his gavel last fall. Miller’s replacement, current Senate President Bill Ferguson (D-Baltimore City), is considerably to Miller’s left, and the GOP caucus move may be reacting to the changes within the 32-member Democratic caucus.

Hershey over the past year or so has occasionally used social media to criticize President Trump. Both Jennings and Hershey are pivotal members of the Senate Finance Committee and skillful orators during Senate floor debates.

Ferguson paid tribute to Jennings and Hershey in a statement Tuesday night. 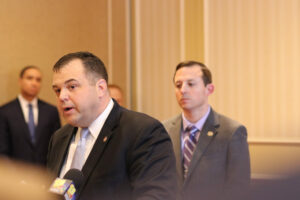 Sen. J.B. Jennings (R-Baltimore and Harford counties) spoke at a press conference in March announcing a quick end to the 2020 legislative session as COVID-19 was spreading through the state. Senate President Bill Ferguson (D-Baltimore City) looks on. Photo by Danielle E. Gaines.

“Minority Leader Jennings and Minority Whip Hershey have been steadfast advocates for the Republican Caucus and their issues during their time as Leader and Whip,” he said. “They have been able to disagree without being disagreeable, and their leadership has helped the Senate produce better legislation for all Marylanders. At a time when partisanship has reached extremes, Senators Jennings and Hershey always focused on what is most important: solving problems for our constituents. This leadership style benefited all Marylanders, regardless of political affiliation.”

But Ferguson’s statement also included recognition that collegiality in the Senate chamber could be at risk.

“I am hopeful that the Minority Caucus will elect leaders who will continue to focus on the values of productivity and collaboration that define the Senate of Maryland,” he said.

In a letter to his colleagues Tuesday night, Jennings paid tribute to Republican achievements and unity within the caucus.

“Over the years, we have celebrated many victories in the Senate,” he wrote. “We have worked together to amend bills to strip them of their worst components, and we have defeated a lot of reckless and irresponsible pieces of legislation that did not serve the best interests of this State. Above all, despite the fact that we sit in the minority, we have made a major impact on legislation that affects the everyday lives of Marylanders. We have personified the word teamwork, and I am extremely proud of what we have accomplished together on the floor of the Senate.”

Jennings also boasted of the Republican caucus’ fundraising progress since he became leader.

“We may not have won every battle,” he told his colleagues, “but there is no doubt, we always won the debate.”