“When the men with guns who have always claimed to be against the system start wearing uniforms and marching with torches and pictures of a leader, the end is nigh. When the pro-leader paramilitary and the official police and military intermingle, the end has come.”

— “On Tyranny,” by Timothy Snyder

History is a stern taskmaster, especially for those who abuse it, ignore it, or simply don’t understand it.

The old President Trump pretending to be a new and improved version of himself, displays, once again, his utter failure, or inability, to grasp the lessons of the past, or let alone the immediate present.

But American citizens are catching on, fast. Wearing a mask once or twice, and cancelling convention crowds, does not alter basic character. Nor does the whiplash reversal erase his botched and bungled handling of the COVID-19 pandemic.

“Beware of abrupt changes in character,” Machiavelli counsels the Prince, his patron, “lest the populace become suspicious.”

As sure as the U.S. Supreme Court gutted the Voting Rights Act, you can bet the condo that the goon squads jack-booting the streets of Portland, Ore., Kansas City, and now Seattle, and other cities to come, including possibly Baltimore, are likely there, or here, until Election Day to frighten voters and suppress the vote.

Yet Gov. Larry Hogan (R), no fan of Trump, has played directly into the manic president’s ploy by insisting on in-person voting at the usual polling places instead of mail-in ballots, which proved to be popular, though problematic, in the primary.

Trump’s private paramilitary force has already begun truncheoning and kidnapping protesting citizens, expressing their First Amendment rights, into unmarked vans the way it’s done on mock TV. In Trump’s febrile brain, life, liberty and the pursuit of happiness are subordinate to his re-election.

A federal court has recently ruled against such violence by Trump’s storm troopers, but that likely won’t stop Trump. Asked in an interview by Chris Wallace if he’d relinquish the presidency quietly and peaceably, if he loses the election, Trump declined to answer, saying only that, “I don’t like to lose.”

Trump has made “voter fraud” and “rigged” elections via the mail-in ballot a priority attack issue for the November general election when he is expected to face Democrat Joe Biden, whom he now trails in the polls by as much as 15 points. Trump has mentioned what he considers the lack of security of voting by mail 50 times in The Washington Post just last week, according to their own reporting.

Draped in anonymous camouflage, wearing no identifying police badges or patches, armed with tear gas, rubber bullets and lethal clubs, Trump’s Gauleiters, with the sneering connivance of Attorney General William Barr, have become a terrifying private army much the way the Stasi operated in East Berlin, and others elsewhere. They argue, feebly, that the rogue forces are intended to fight crime and protect federal property.

“Armed groups first degrade a political order, and then transform it,” Snyder writes in “On Tyranny.”

“Violent right-wing groups, such as the Iron Guard in interwar Romania or the Arrow Cross in interwar Hungary, intimidated their rivals. Nazi storm troopers began as a security detail clearing the halls of Hitler’s opponents during his rallies. As paramilitaries known as the SA and the SS, they created a climate of fear that helped the Nazi Party in the parliamentary elections of 1932 and 1933. In Austria in in 1938 it was the local SA that quickly took advantage of the absence of the usual local authority to loot, beat and humiliate Jews, thereby changing the rules of politics and preparing the way for the Nazi takeover of the country. It was the SS that ran the German concentration camps – lawless zones where ordinary rules did not apply. During the Second World War, the SS extended the lawlessness it had pioneered in the camps to whole European countries under German occupation. The SS began as an organization outside the law, became an organization that transcended the law, and ended up as an organization that undid the law.”

The Founding Fathers were wary of presidential power and corruption. They gave Congress and the courts the authority to checkmate any such abuse. But they couldn’t see far enough into the future to portend a lawless Donald Trump.

Trump has been a loser all of this life – failed marriages, bankruptcies, dysfunctional family, tax cheat, and all – until he became president, assuming its enormous power and total command. He has played the Congress and the courts like a Stradivarius, which is a pretty fine fiddle, winning some, losing some and ignoring it all to fulfill his ignoble and solipsistic whims.

The initial intrusion of Trump’s militiamen into Portland was a disastrous backfire. It lacked authenticity because of its appearance of anonymity. But Trump’s Justice Department, under Barr, his minister of justice, has produced a more sophisticated version that has begun to occupy cities, starting with Kansas City. (Recall that it was Barr who directed the quasi-military clearing of Lafayette Square to open a safe path for Trump to hoist a Bible for TV cameras.) 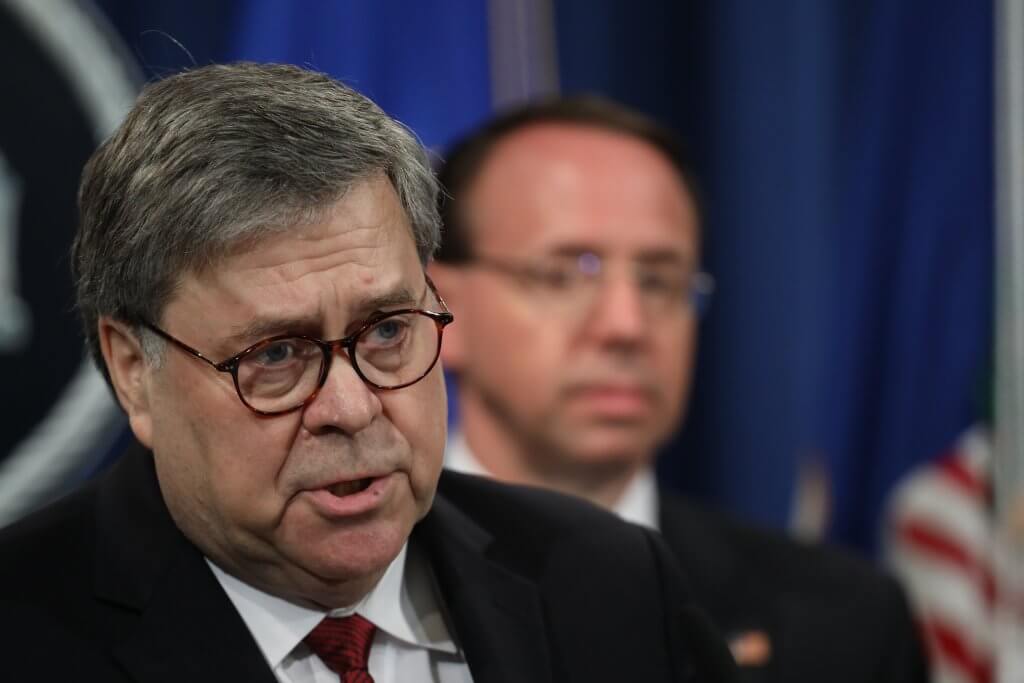 Called “Operation Legend,” apparently intended to give it patriotic legitimacy and Fox News-worthy flare, the militarized occupying forces, as reported, will comprise teams of FBI, U.S. Marshals, Drug Enforcement Administration and Bureau of Alcohol, Tobacco, Firearms and Explosives agents – all armed and dangerous and manhandling their fellow citizens.

They are there, we are told, to fight crime, but their anonymity and their bullying tactics have belied another motive which with their sudden appearance soon became apparent. Humiliate and suppress dissent.

The administration of Richard M. Nixon was at least more subtle, but nonetheless visible, in its approach. The enforcers were the same cut and character, only in suits and ties instead of masks and ambiguous camouflage. During election time, Nixon dispatched assistant attorneys general to major cities to act as poll watchers searching for fraud. But – you guessed it – their real intent was to suppress black voting as part of a their “Southern strategy.”

Nixon’s strategy back then, and now appropriated by Trump, was mocked as “law ‘n order” – pronounced quickly at the time to mimic “lawnorder.”

Portland is suing the federal government over the uninvited and unidentified occupation of its city by federal squads of baton-swinging gangbusters. Chicago forewarned Trump with similar legal action.

And Baltimore State’s Attorney Marylin Mosby and her Philadelphia counterpart, Larry Krasner, co-authored an op-ed in The Washington Post saying that federal goon squads are unwelcome and unneeded in their cities. Baltimore demonstrations, for example, have been peaceful and tidy, making their point without violence or destruction (except the toppling of the Christopher Columbus statue into the Inner Harbor).

Other cities listed, but not likely limited to, for treatment by Trump’s stormtroopers include Albuquerque, Chicago, Detroit, New York, Oakland and Philadelphia and, of course, Baltimore.

The comingling of paramilitary and official police and military is precisely what Snyder warned about. Yet the sunny-side-up view is that they might be needed, and used, to escort a resistant Trump out of the White House next January. If only.

There’s nothing new, for example, in Maryland and Baltimore, about federal, state and local law enforcement teams working together to enforce the law, but never against innocent or protesting citizens expressing their rights.

The Maryland U.S. Attorney’s office, the Maryland attorney general, the state police and Baltimore Police, as well as local state’s attorneys, have long had a working partnership in busting organized drug rings and the vicious MS-13 gangs.

And – Nixon again – and this time his minister of justice, John Mitchell, sometime in the late 1960’s or early 1970s, established a federal strike force in Baltimore to ferret out the Mafia and associated organized crime. They were laughed out of town. There was no Mafia in Baltimore because the local cops were paid off to keep the mob out. (The bungled effort is lightly fictionalized in my novel, “Hooked.”)

And Maryland has a long history of a military presence during times of civil strife and unrest.

The most recent example was, of course, during the riots five years ago. Following the death of Freddie Gray while in the custody of police, National Guard troops, State Police joined city cops in occupying huge swaths of the city to tamp down violence and protect property.

Flipping the calendar backwards, the National Guard occupied the city of Cambridge on and off for two years, using tear gas to quell nightly marches to Race Street, the line of demarcation between the Eastern Shore city’s Black and white neighborhoods.

During the riots following the assassination of Dr. Martin Luther King Jr., in April 1968, Baltimore was a city in flames and under siege, as were many others. National Guard troops patrolled city streets and Baltimore was literally sealed off and access in or out was prohibited without a valid reason.

On another occasion in early 1969 or 1970, another riot took place when Thomas D’Alesandro 3d was mayor of Baltimore. D’Alesandro bivouacked at the city’s Fifth Regiment Armory with other state and local officials where he broke down crying under the stress of the carnage in his city.

During the same period, National Guard troops occupied the University of Maryland Campus at College Park for nearly two years to preserve peace and calm after a series of anti-war and pro-civil rights riots that left students injured and serious damage to college property.

And Maryland, through the 70s, was the direct route for marchers to the nation’s capital to protest and demonstrate against the many causes du jour. Each occasion required police and/or national guard escort to guarantee safe passage until the marchers cleared the state.

And, of course, for added security, Baltimore now has the aerial eye-in-the-sky wide-angle lens that can gulp nearly a third of the city’s 84 square miles in one click of the shutter. It can do the work of a thousand shock troops in the blink of an eye.

So while Hogan and election officials quarrel over the method(s) and the cost of how Marylanders will vote in November, let’s add to the mix the question of what Hogan will do if Trump’s goons park at polling places in, say, Baltimore City and Prince George’s County. Will Hogan call out the National Guard for a chase or a shoot-out?