A divided Board Public Works voted on Wednesday to advance Gov. Lawrence J. Hogan Jr.’s top transportation priority — the reconstruction of the American Legion Bridge and the widening of a portion of Interstate 270 and the Capital Beltway.

The 2-1 vote represented a victory for Hogan, who called the decision “monumental and historic.” Transportation advocates hope the plan will bring traffic relief to the capital region, which suffers from some of the nation’s most grueling commutes.

“I believe this is the most historic vote we’ve taken in the Board of Public Works in 20 years,” Hogan said. “I’m very pleased that we’ve been successful in reaching a bipartisan, regional consensus on building this critical plan.”

After a preliminary vote in June, the board was originally scheduled to consider wide-ranging amendments in early December, but Hogan was forced to pull the item from the agenda when Comptroller Peter V.R. Franchot (D) balked at the changes.

Under the compromise Franchot’s team negotiated with State Highway Administrator Gregory Slater over the last month:

— The state will share toll revenue collected on the new I-270 and I-495 “managed lanes” with Montgomery County up front — rather than after bondholders have been paid off. The money will be earmarked for local transit improvements;

— The state is barred from purchasing private homes to expand the Beltway, I-270 or the bridge;

— Construction will be performed “by union workers earning unions wages,” Franchot said; and

— Mass transit buses will be allowed to use the new privately-financed express toll lanes free of charge, rather than having to sit in traffic in the no-cost lanes.

Hogan and Franchot voted for the retooled plan; Treasurer Nancy K. Kopp (D) voted against it. Kopp praised negotiators for improving the proposal but said she still had too many reservations to support it.

Reaction to the vote was mixed. While many transportation advocates welcomed the board’s action, others were critical.

Bob Buchanan, president of the 2030 Group, a coalition of regional business leaders, noted that Amazon chose to locate its second national headquarters in Northern Virginia, not Maryland.

“Companies like Amazon really want connectivity,” he said. “It’s an economic imperative that we move forward.”

John Kane, a leader of Citizens for Traffic Relief and a former state GOP chairman, sought to rebut environmental critics by pointing to the benefits of reduced congestion.

“The science is clear on this: When you increase rush-hour speeds from 10 miles per hour to 35 miles per hour, you cut CO2 emissions per mile by more than half,” he said.

Franchot, a four-term comptroller who told supporters in a Silver Spring bar Monday that he intends to run for governor in 2022, praised Hogan for his willingness to compromise.

“This is a win-win agreement for everyone involved,” he said. “We have more work to do, and discussions will be held in the months and years ahead, but I want to thank Gov. Hogan for doing the right thing and getting this legacy project on the road to success.”

“Peter did big work and I thank Nancy for continuing to ask hard questions,” he said in an interview. “This is big. We can actually shape this now.”

In mid-December, shortly after the vote was delayed the first time, MDOT announced the retirement of Transportation Secretary Pete K. Rahn, a hard-charging advocate of express toll lanes who many legislators and local officials found to be condescending and dismissive of their concerns.

They also faulted his agency for being unwilling to share detailed information about the state’s road-widening plans.

Hogan moved quickly to tap Slater for the post. Though he has not been confirmed by the state Senate, the highly-regarded SHA chief has already become the public face of the project.

Elrich, Kopp and others heaped praise on him, even as they signaled they will continue to push for a detailed agreement on transit funds and additional information.

“I share folks’ feeling that you should see more data [and] that it should be public, so that people understand it,” said Kopp. “One of the concerns is we can’t see everything, we just see the conclusions.”

The treasurer noted that on Tuesday, after bad weather hit the region and many businesses and governments closed early, Northern Virginia commuters were being charged tolls of $60 and more to ride in the managed lanes on I-395 from Washington, D.C., to Springfield.

Slater incorrectly blamed the spike on the algorithm that governs I-66, which uses a different toll-setting scheme than other Northern Virginia highways. He later corrected himself and acknowledged that the sudden crush of homebound commuters caused tolls to skyrocket on I-395.

Several speakers urged the board to reject the highway plan.

Rockville Mayor Bridget Donnell Newton said widening I-270 up to Interstate 370, where northbound traffic is squeezed into two lanes, would create massive backups every night — with bailout impacting local roads.

Brad German, the head of Citizens Against Beltway Expansion, pointed to the “practical and financial P3 failures” that have occurred in other states.

“We need to act more to best protect the interests of Maryland communities, commuters, the environment and taxpayers,” he told the panel.

To get his plan through the BPW, Hogan had to agree to dramatically scale back and defer his plan to widen the Beltway east of the I-270 spur. 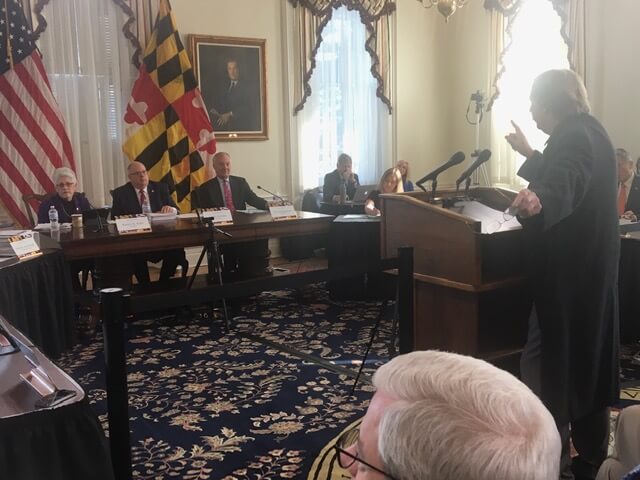 “Don’t come back to Greenbelt looking for our votes,” he said, gesturing angrily toward the board and speaking loudly. “If you think this is going to get you elected the governor, you’re sadly mistaken. Fifty years from now when the water is lapping at the steps of this building because of climate change, you’re not going to be looking so good.”

Franchot said he was proud of his role in advancing the plan.

“Right now the congestion is damaging the economy and it’s negatively effectively the environment,” he said. “It’s becoming unacceptable to just stand still and do nothing.”