In an effort to secure crucial support from a colleague on the Board of Public Works, Gov. Lawrence J. Hogan Jr. (R) agreed on Wednesday to amend his plans to widen two frequently-clogged highways in the Washington, D.C., suburbs.

The changes, adopted on the fly at a tense, marathon session of the three-person panel, put the widening of Interstate 270 atop the state’s priority list.

The addition of new lanes to the Capital Beltway (I-495) through Montgomery County, from the American Legion Bridge to  Interstate 95 in College Park, would follow, with extra lanes coming to Prince George’s County after that.

The alterations were enough to win the support of Comptroller Peter V.R. Franchot (D), who had been considered the swing vote before the panel met.

State Treasurer Nancy K. Kopp (D) voted against the administration’s use of a public-private partnership to build the new lanes, saying that too many unanswered questions about financing, environmental impact and other concerns remained.

Although it’s way too early to know when any construction might take place, Hogan’s willingness to stagger the order in which construction will occur was a reluctant acknowledgement that his signature transportation proposal had generated persistent opposition among elected officials, interest groups and vocal citizens in Montgomery and Prince George’s counties.

“This will allow even more time for us to work together with local leaders in Montgomery County, to get more input from citizens, and we’ll have more collaboration, more study and more debate,” Hogan said, with perhaps a tinge of sarcasm.

Hogan noted that the changes will not be without impact to commuters who rely on the traffic-choked Beltway.

“This will also give…the hundreds of thousands of commuters who are tired of sitting in that traffic more time to convince their local leaders that they would like to see these improvements move forward, at some point,” he said.

Before publicly signaling his willingness to back Hogan’s plan, Franchot offered four additional amendments, including one that would block the state from using eminent domain to force-purchase any homes or other properties without final approval of any “P3” contracts by the Board of Public Works.

Another amendment — long sought by critics of MDOT’s plan — would guarantee transit vehicles toll-free access to any new express lanes. A third provision required the state to give 10 percent of its share of express lane toll proceeds to Montgomery and Prince George’s for regional transit improvements.

Hogan agreed to all four of Franchot’s requests as Kopp sat quietly.

Hogan’s plan to add four express toll lanes to the two roads — financed by private firms in exchange for the right to charge tolls of varying amounts — was announced with great fanfare in 2017. Though he appeared less than thrilled to have to accept changes to his approach, Wednesday’s vote represented a big win for the governor.

“This transformative project… is about finally taking the first step to move forward and to finally take action on an issue that elected officials have literally ignored for decades,” Hogan. “It will result in less traffic, more peace of mind, cleaner air, and a much better quality of life for hundreds of thousands of Marylanders for decades to come.”

Although Franchot was the swing vote, he heaped praise on Hogan for putting his political capital behind a top concern of residents in the D.C. suburbs.

“Better days [are] ahead for the state of Maryland,” Franchot said. “Governor, thank you for your leadership.”

Officially, the Board of Public Works vote designates the lane-widening as a public-private partnership, a step required by state law for MDOT to move forward and solicit bids. That’s the same type of arrangement that’s building the Purple Line, the east-west light rail project through Montgomery and Prince George’s counties.

The changes and subsequent vote Wednesday on the Hogan plan followed several hours of unusually tense discussion. Forty people turned up to testify on the project, and in a move that appeared to catch Montgomery County Executive Marc B. Elrich (D) and others off-guard, Hogan limited public testimony to 60 seconds per person, saying staff would “cut the microphone” for people who went long. 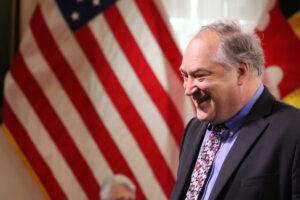 Montgomery County Executive Marc B. Elrich (D) at the Board of Public Works meeting. Photo by Danielle E. Gaines.

“In one minute, you can’t possibly have meaningful discussion,” Elrich said.

“That’s not a working group,” Elrich replied. “You’re not a transportation person.”

Elrich: “It is true. We were not part of this process.”

As testimony continued, Hogan interrupted most critics of his plan, correcting what he said were mistakes in their testimony. Hogan and Benjamin Ross, chair of the Transit Opportunities Coalition, squabbled over whether the tolls on the extra lanes could hit $40 per ride — as has happened with express lanes along Interstate 66 in Virginia. Hogan treated supporters of his plan more cordially.

Hogan also appeared irritated with Kopp, a former legislator from Bethesda. He interrupted her repeatedly to — in the words of one observer — “mansplain” the item to her.

“We are moving forward with the P3 designation,” he said during one such interruption. “We are not approving any contracts or any details of anything. And we’re going to come back with potentially three different projects that would have to be approved.”

“You can’t expect us to have every answer to everything before we even start it,” Hogan continued.

In an interview after the vote, Elrich said he was disappointed he didn’t have the opportunity to convince Hogan the state should work harder to get southbound I-95 traffic to use the Inter-County Connector and I-270, rather than the Beltway.

“They already built the ICC,” he said. “Why wouldn’t you take advantage of the thing that was supposed to be the Beltway bypass?”

He also said he wanted to press Hogan on the need to include the widening of the American Legion Bridge into Phase 1, so that commuters can flow more seamlessly from the I-270 corridor onto the Beltway and into Virginia — and back in the evening.

Montgomery County Councilmember Tom Hucker (D), who represents the Silver Spring area, including several communities where the Beltway already runs close to homes and parks, said the changes approved by the board represent “a huge win” and “the breaking of a logjam.”

“For the first time, the governor is indicating he wants us at the table, and he’s trying to accommodate our input. I don’t think he got all the details exactly matched up with our position, but that’s fine,” said Hucker, who chairs the council’s transportation committee. “I’m hopeful we’re going to be able to sit down with them and work some of this out in a way that makes both of us happy.”

Hucker said he too hopes to get state leaders to further amend their plan, to put the widening of the American Legion Bridge into Phase 1, with the work on I-270.

Not every opponent of Hogan’s plan was quite as optimistic. Some Montgomery County activists described the delay on Beltway work as merely a temporary stay of execution.

Joshua Tulkin, Maryland director of the Sierra Club, said the organization was “greatly disappointed” that the project is advancing, but expressed some hope that activists would continue to be able to put pressure on state officials.

“In the past year we have seen thousands of people become active, concerned for how highway expansion will impact their communities and the climate,” he said. “While we did not win the vote today, it is clear that Governor Hogan and Peter Franchot recognized the powerful movement growing in opposition, and we will only continue to grow as more details of this plan emerge.”

Tulkin also suggested that Franchot, who is pondering a run for governor in 2022, carries some political risk by being associated with the highway projects.

“Make no mistake, Peter Franchot owns this project now, and every impact and very outcome, every delay,” he said in an interview. And then he turned Hogan’s argument against highway expansion foes on its head.

“I believe Peter Franchot and Gov. Hogan and MDOT are now the ones that are delaying traffic relief for Marylanders, because they are pursuing a project with a bunch of fundamental flaws, and it’s going to fall apart at some point,” Tulkin said. “And that’s going to delay the relief that people need.”

Farther to the north, officials expressed gratitude that the I-270 improvements would be given top priority. The interstate runs from the Capital Beltway north to Frederick.

“Commuters are snarled in nightmarish traffic throughout the day on this outdated highway. I’m very happy to see real progress to expand I-270,” Sen. Michael Hough (R-Frederick) said in a statement.

He also voiced support for the Franchot amendment requiring MDOT to study how monorail is used around the world. A Montgomery County developer has developed a proposal to connect the city of Frederick with the Shady Grove Metro station via monorail.

John Townsend II, head of government relations for AAA of the Mid-Atlantic, also praised Hogan for his willingness to amend his roads plan.

“We changed the sequence by which projects will be done, but altogether it’s still a green light,” Townsend said. “It’s an acknowledgment that the governor is listening to the people of Prince George’s County and Montgomery County.”

In an interview with reporters, Kopp said she was “very troubled” that the board was asked to vote on changes that hadn’t been put in writing. Asked about several aspects of the revised plan, Kopp repeatedly said, “It’s not clear.”

“I think there’s just a tremendous amount of confusion, and insufficient hard information,” she added.

She offered a “no comment” when asked about Hogan’s tenor during the meeting.

“I don’t run meetings the same way the governor does,” she allowed.

Elrich said his prepared remarks — which he had to ditch due to time constraints — included lavish praise of Hogan.

“We’ve listened to other people, but they’ve never built anything or funded anything. [Hogan’s plan] was the first time somebody said, ‘This is important enough that I’m going to figure out how to get it done.’ I was going to give him credit for that.”