A Montgomery County developer who made money over a long successful career hopes to convince top state officials that the future of transportation — not just here, but across the country — includes a mode of travel that many Americans regard as too “niche” to have large scale value.

Robert O. Eisinger, managing partner of a real estate firm headquartered just off bustling Interstate 270 in North Rockville, is brimming with enthusiasm about the potential to move large numbers of commuters efficiently, safely and inexpensively via monorail, the same technology that many people have used at theme parks, airports and overseas.

He has spent a chunk of his own fortune to assemble a team — engineers, construction experts, a monorail pioneer from Canada and others — to study the feasibly of bringing monorail to Maryland. Toward that end he has produced a slick, computer-enhanced video that he has shown to a bevy of local officials and state lawmakers from Montgomery and Frederick counties.

Much of the imagery shows sleek, modern cars, draped in the state and county flags, zipping high above a multi-lane highway that is clogged with traffic.

In one image, the train enters a building several floors above street-level, coasting to a gentle stop, a concept that clearly excites Eisinger, who said developers will be encouraged to design buildings in this manner.

Montgomery County Executive Marc B. Elrich (D) and Sen. Nancy J. King (D-Montgomery), the chair of the Senate’s powerful Budget and Taxation Committee, are among those who have viewed the video. Both mentioned it to a reporter in recent days, unprovoked. Frederick County Executive Jan Gardner (D), Sen. Michael Hough (R-Frederick), and the mayors of Frederick and Gaithersburg have also seen it.

Next month, Eisinger will deliver his presentation to state Transportation Secretary Pete K. Rahn, the man Gov. Lawrence J. Hogan Jr. (R) is counting on to shepherd his plan to widen three major highways — Interstate 270, the Capital Beltway (I-495) and eventually the Baltimore-Washington Parkway — two lanes in each direction. 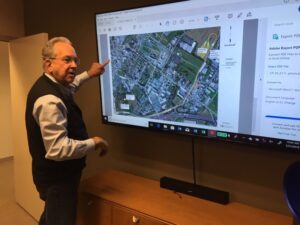 Eisinger’s idea is to build a monorail line from the MARC station in Frederick to the Shady Grove Metro along the I-270 median, with intermediate stops in Urbana, at Comsat headquarters in Clarksburg, and at the MARC stations in Germantown and Metropolitan Grove.

His team projects that commuters could make the entire 27-mile trip in 30 minutes, half of what it takes by car on a typical weekday morning.

In a discussion with a reporter on Tuesday that lasted 90 minutes, Eisinger, wearing a blue oxford shirt, an Arc’teryx hiking vest, jeans and Teva sandals, offered both big-picture vision and loads of nitty-gritty details. Enthusiasm was not in short supply.

He believes that the U.S. fails to tap the full potential of monorail because most policymakers and the public have only seen such systems at places like Disney World.

He claims monorail has many advantages over transit systems like the Washington, D.C.-area’s Metro.

Monorail cars are lighter than traditional rail, they’re fully automated (there is no human operator), and their support poles require minimal contact with the ground.

“It steps over bridges, cars, roads. It runs in existing right-of-way, so you don’t have buy any additional ground,” he said. “You don’t have to take anybody’s home. It can be built off-site and erected at night and not affect existing traffic.”

Eisinger also said monorail systems are less expensive to build and to operate — but meet all federal safety standards.

Eisinger’s team — working pro bono — believes that by charging Metro-like fares of $5 per trip, the Frederick-Montgomery line he is proposing could take in $50 million per year, nearly double the system’s $27 million operating expenses.

Construction, he estimates, would run $3.5 billion. He does not have a formal financing plan, but envisions some type of public-private partnership.

After putting a “significant amount” of his own money into studies and his video, Eisinger formed a nonprofit, The High Road Foundation (thehighroadroundation.org), to enable him to accept contributions.

He acknowledges that the other donors are commercial land owners like himself, but he insists his proposal is not designed to link properties he owns. It is, he maintains, an effort to keep the most vibrant part of Maryland’s economy from choking on traffic.

“The individuals that have contributed to the cause are other developers,” he said. “We’re only trying to get everybody to study this. We’re not trying to make money on it. But we’re trying to preserve the value of our real estate down here.”

In a recent newspaper article, a transportation consultant expressed concern that monorail parts can be difficult to come by.

Eisinger dismissed such talk as “totally without merit,” noting that in many foreign capitals, monorail is a key component of the transit mix that commuters rely on each day.

“There’s no difference in this monorail to every other transit mode it. You’re locked into whoever the manufacturers are. And [system operators] deal with it in the contract. … It’s no different from buses and trains.”

Eisinger won’t divulge details of his plans to build beyond his initial concept, but he clearly envisions doing so. His video refers to the Frederick-Shady Grove project as “a pilot.”

“We have to get a first segment. I have to prove this mode,” he said, adding, “This is not a one-off.”