MANCHESTER, N.H. — In his first visit to New Hampshire as a potential candidate for president, Maryland Gov. Lawrence J. Hogan Jr. (R) cast himself as a results-oriented leader with a proven ability to attract votes from across the political spectrum.

In a breakfast speech to a politically plugged-in crowd at Saint Anselm College here and follow-up remarks with a large group of reporters, Hogan displayed the mastery of details that a man contemplating a run for president in 2020 would need to have at his fingertips — the political standing of the current occupant of the Oval Office, the mood of the electorate, and candidate filing deadlines in important states like New Hampshire, home to the nation’s first presidential primary.

He also made conspicuous note of the number of states — 23, by his count— that have open primaries, contests in which crossover-minded voters can choose any ballot that wish. New Hampshire is one such state.

Those voters, Hogan more or less conceded, would be key to his success if he takes on a president who remains hugely popular with Republicans even as he has alienated almost everyone else.

“If it drops below that, it’s very difficult to win an election,” Hogan told reporters.

Hogan’s speech was a familiar version of the remarks he often gives closer to home. He described his improbable win over Democrat Anthony G. Brown in 2014, his push to cut taxes and reduce regulation, the spasm of violence that erupted in Baltimore early in his tenure, his successful battle against cancer, his second-highest-in-the-nation job approval numbers, and his runaway win for a second term.

“Our state is only 26 percent Republican, but after four years of bipartisan success and economic progress, last November in our deep blue state in a big blue year, with a huge blue wave, we rode a purple surfboard to an overwhelming double-digit victory,” Hogan said.

“And while my party was racking up losses all across the country, in our state, where Hillary Clinton won in 2016 by 26 points, I got more votes than any previous gubernatorial candidate ever.”

Hogan made repeated references — as he often does — to the contrast between Annapolis, “where we have repudiated the debilitating politics practiced elsewhere,” and the nation’s capital, “where insults substitute for debate and recrimination for negotiation.”

Republican Thomas D. Rath, a former New Hampshire attorney general who is routinely referred to as the smartest man in state politics, praised Hogan (“He’s a good fellow, and his optimism and his decency is pretty clear,”) but he stressed that Trump retains a powerful grip on the GOP base.

“I think he’s — at the moment — captured if not the hearts of every Republican, he’s certainly captured the mechanics of the Republican Party,” said Rath. “So the challenge would have to be based on the ability to get votes out of the independent sector.”

In New Hampshire, as of mid-December, 41 percent of the electorate was unaffiliated, 31 percent were Republicans and 28 percent were Democrats. During a presidential primary, Granite State voters can select the ballot of either party.

With more than 20 candidates running in the Democratic primary and at least two running on the GOP side (Trump and former Massachusetts Gov. William Weld), Rath said the competition for the large swath of independent votes is going to be intense.

“It was a great message. And I think it’s a message that needs to be heard,” Rath said after Hogan’s speech. “I’m not talking about the political feasibility of how far he can carry it, but it felt genuine.”

Hogan said he has travelled to 10 states and has plans to hit 16 more, mostly as part of his future role as head of the National Governors Association. That gig begins in July.

He said there is “no exact matrix” for deciding whether to get into the presidential race, but he signaled that a decision will likely come in the fall.

“I’m just going to continue to listen to people, and just feel it out,” Hogan said during a press gaggle after his remarks at the breakfast.

“The filing deadline in New Hampshire is Nov. 15. A shorter field would be better for a challenger that didn’t have as much money, right? There’s no rush to jump in. I don’t feel any pressure to get in any earlier than what the law says you have to get in.”

Following his speech, Hogan fielded questions from members of the audience. They focused on health care (prescription drug prices and Alzheimer’s disease), the 2015 unrest in Baltimore, the federal budget, the nation’s crumbling infrastructure, and more.

In response to questions about 2020, Hogan admonished the Republican National Committee. “To change the rules and to insist [on] 100 percent loyalty to the ‘Dear Leader,’ it just didn’t sound very much like the Republican Party that I grew up [in], working for Ronald Reagan and George Bush. I’m for a return to the traditional Republican Party.”

The governor said it was “very short-sighted and wrong” for the party to attempt to shield Trump from primary challenges — and he expressed concern that such moves feed an over-dependence on the party’s most loyal voters.

“I won suburban women overwhelmingly [and] I won nearly a third of the African-American vote,” Hogan said of his own second term victory. “No other Republicans in America are doing that. I’m for building the Republican Party into a bigger tent that can appeal to more people. And I think we’re doing the opposite right now.

“I think the Republican Party is shrinking the base down to only a certain percentage of white males, and you’re not going to win national elections or most state elections. And so having more voices that are saying more things, and showing that the Republican Party does have diverse thought and we’re not monolithic, I think is very healthy for the party and the country.”

Finding a non-Trump, non-Democratic lane will be Hogan’s challenge between now and whenever he makes his decision. As will putting together a campaign team and generating enough funding to be competitive if — and it remains a big if — he pulls the trigger. 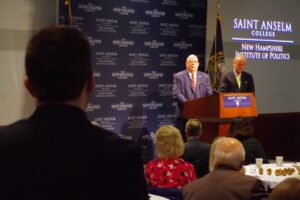 Gov. Lawrence J. Hogan Jr. (R) listens to a question at the “Politics and Eggs” breakfast. Photo by Bruce DePuyt

America is sick of politics as usual. But is a nation notable for its MSNBC-Fox divide looking for a third way, and is the political architecture capable of fostering such a candidate?

Hogan’s candidacy would put those questions, and others, to the test.

One thing is certain: If the governor gets in and starts to get under the president’s skin, the anti-Hogan tweets will start.

“It’s probably not the most pleasant thing to go through, I’m sure,” Hogan said, in response to a reporter’s question. “But you know, I battled cancer for 18 months, so I can probably take it.”