Gov. Lawrence J. Hogan Jr. returned to his political roots this week. After seasons of carefully calibrated bipartisanship and moderation, he reminded The Washington Post in an interview that he is, at heart, a Reagan Republican, and he used especially sharp language at a news conference to articulate his disapproval of certain elements of the Democratic legislative agenda.

And then on Thursday, Hogan brought an old friend and mentor to town: former New Jersey Gov. Chris Christie (R).

Christie, the erstwhile adviser to President Trump, vanquished White House contender and former U.S. attorney, is peddling a book called “Let Me Finish,” and Hogan brought several dozen of his friends to the Annapolis Yacht Club Thursday night to hear Christie speak and buy his book.

But before the main event, which featured cocktails and hors d’oeuvres, Hogan and Christie met with the media at Government House, the governor’s residence.

Hogan and Christie reiterated their mutual admiration and personal friendship, which was much in evidence when Hogan was first running for governor in 2014 and Christie was chairman of the Republican Governors Association. Christie made some strategic investments in Maryland back then, helping Hogan to his improbable victory.

“I would not be governor of Maryland if it wasn’t for Chris Christie,” Hogan said.

He added that Christie provided a template — for how to govern and win reelection in a nominally blue state.

At their news conference, Christie, who still talks frequently with Trump even as he has become more of a public critic, asserted that Hogan has a promising political future. But he stopped short of recommending that Hogan challenge Trump in 2020, as some renegade Republicans are urging him to do, and suggested that the president, for all his flaws, would be very difficult to upend in a GOP nomination fight.

“I think Larry has a very bright future as a leader of our party,” Christie said.

Hogan shrugged off suggestions that he was really taking steps to run, even as he’s elevated his national political profile a thousand- fold since the beginning of the year.

Christie and Hogan said they hadn’t had much opportunity to chat lately, but were looking forward to doing so, implying that they might kick around Hogan’s prospects a bit later Thursday evening, with Christie planning to stay overnight.

Christie said Trump is sure to run for reelection; Hogan said he wasn’t so sure.

About an hour later at the yacht club, in a room with a white bar designed to look like a ship’s bow, the two men again articulated their mutual respect to several dozen Hogan friends and associates – a group that included cabinet members and staffers, donors, Republican lawmakers, party stalwarts and lobbyists. After an introduction and book plug from Hogan (“I couldn’t put it down”), Christie spoke for almost an hour, interviewed by Nina J. Easton, a journalist and author who happens to be married to Hogan’s media consultant, Russ Schriefer (Schriefer has also worked for Christie). 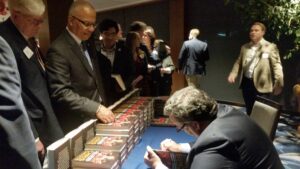 Lt. Gov. Boyd K. Rutherford (R) gets his copy of Chris Christie’s “Let Me Finish” signed by the author at the Annapolis Yacht Club Thursday night. Photo by Josh Kurtz

Christie opened with a story that Hogan was bound to love, about how he became convinced that Hogan could win in 2014.

He recalled that Phil Cox (also in the room Thursday night), who was then executive director of the Republican Governors Association, told him that he was getting interested in Maryland that summer. Christie said he was skeptical, but agreed to allow Cox to conduct a poll.

Christie then traveled to Maryland to meet with Hogan and attend a small fundraiser with him in Bethesda. “It was love at first sight,” he said.

To come to Hogan’s aid, the RGA would have to go into debt, Christie recounted. So he wanted to clear the decision with at least one other member of the RGA executive board.

The only other member of the executive board not “in cycle” in 2014 – meaning he wasn’t up for election himself that year – was then-Indiana Gov. Mike Pence. Christie said he told Pence about his desire to help Hogan and put the committee in debt.

“Chris, have you been drinking?” was Pence’s quick reply. But he eventually agreed to “pray on it” overnight.

Christie recalled thinking, “We don’t pray on shit like this in New Jersey…We save our prayers in New Jersey for very specific things.”

But the national money flowed into Maryland, Hogan won, and the rest is history. Christie called Hogan’s 2014 victory “truly one of the thrills of my life.”

The rest of Christie’s talk was dominated by discussions about his family life; Bruce Springsteen (he’s seen 138 Springsteen shows dating back to 1975 and the two have a modest friendship, despite their political differences); 9-11; Superstorm Sandy; “Bridgegate;” and Christie’s own (mis)fortunes in presidential politics.

In keeping with his book title, Christie was unfazed when power was cut from his microphone for two minutes; he kept right on talking.

Hogan and Christie agreed that they displayed similar leadership styles during the greatest crises of their governorships – Sandy, in Christie’s case, and the 2015 Baltimore riots in Hogan’s.

“You need to show up,” Christie said. “People want to see you.”

There was no specific discussion about Hogan’s political future at the yacht club, but Christie was asked about the future of the GOP. He predicted that post-Trump, the party will likely go back to the way it was.

“I do think the future of our party is as a conventional, right-of-center party,” he said, labeling Trump a unique figure – “thank God.”

Christie also said that Trump and his associates are vulnerable to the many investigations taking place – particularly to those under way in the Southern District of New York.

Christie did not close the door to future political service, though he said he’s focusing on earning money these days, with college still ahead for two of his four children. And he paid tribute to Hogan’s ability to win in blue Maryland – proof, he said, that “candidates win elections, not parties.”

Maryland, Christie said, is example A.

“They didn’t vote for a Republican,” he said. “They voted for Larry. Is that the sign of a permanent political alignment in Maryland? Hell if I know.”