As Don Mohler approaches the end of his seven months as Baltimore County executive, he has been widely praised for the outstanding job that he did under trying circumstances.  He was selected for the position by the County Council after the sudden and tragic death of his boss, Kevin Kamenetz, at age 60. Mohler must have seemed like a “safe” choice who would make sure county government functioned smoothly until a new executive was selected in the November election.

In fact, however, the story of his tenure in office is very different than many expected.  Mohler tells of having been advised by previous county executives not to see himself in an acting role, but to fully take charge. Anyone who knows Don Mohler would tell you that being merely a placeholder was never an option.

Don — he and I are friends of long-standing and both attend an off-the-record group that meets periodically for breakfast and conversation about current affairs — has been described, correctly, as highly principled, passionate about the things he cares about, “the nicest person in Maryland politics” and a great communicator. All those traits served him well as county executive and in a long public career before he assumed that office.

A couple of moments in his tenure stand out for his willingness to speak up on controversial issues. Last summer, two members of the County Council wanted to cut back bus service between White Marsh and Baltimore City. According to Mohler, he was on vacation standing in front of the Victoria and Albert Museum in London when he heard the news.

He dictated a response that left no doubt that he strongly opposed the suggestion. The Sun called it a “fiery response.”  His staff quickly realized that Mohler would not tolerate any softening of the message. In the broader context, Mohler has been, as Kamenetz was before him, a staunch advocate of closer relations with the city. 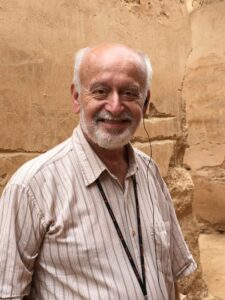 Similarly, when gun violence reared its ugly head in Aberdeen, Mohler made very clear that he had no patience for “thoughts and prayers” without action. He has been a long time advocate for stronger gun laws in this country and wasn’t going to back off merely because he had become county executive.

At Wednesday’s unveiling of his official portrait, a series of speakers praised him as a person and as a leader. When it was his turn to address the assembled crowd, he used his speech to underscore the values and character that allowed him to rise to the occasion.   Several of his comments are particularly telling.

At the start of his talk, Mohler singled out his security detail for special thanks. It’s easy and appropriate to acknowledge the public officials in attendance, but he started with a group of people who don’t often get recognition. It was yet another demonstration that he is a “people” person who never lost his grounding. In the same vein, he emailed me months ago to ask if he could continue to attend our breakfast even though he was now county executive.

While he still commands the bully pulpit, Mohler used the opportunity Wednesday to deliver blunt remarks about issues important to him. He started his professional career as an educator in the Baltimore County school system and clearly continues to have a real passion for public schools. He has been an outspoken supporter of Interim Superintendent Verletta White despite the State Board of Education blocking her becoming permanent head of the county school system. She was one of the speakers Mohler included in the program and he showered praise on her during his comments.

Mohler also thanked the members of the press who were at the event and pointedly noted that “the press is not the enemy of the people, but is in fact the backbone of democracy.”  He talked with pride about his effort to make county government more open and transparent.

I asked him if he would have been as outspoken if he had had to run for reelection. That led to an interesting discussion about the tendency of many public officials to resort to polls and focus groups before deciding how to publicly address an issue. It also led to his observation that money is the core of everything that is wrong with politics. At the end of those ruminations, Mohler, being the person he is, said he would have been as candid regardless of the electoral consequences. I believe him.

In addition to being Don’s friend, we’re also Facebook friends. It doesn’t take much time with him in cyberspace to realize that his family and his love of Catonsville are central to his life. That reality probably helps explain why he never lost his humility or common sense as county executive.

Given his success, you have to wonder why we aren’t selecting more people like Don Mohler to positions of public leadership. He may have been an accidental county executive, but he certainly did not throw away his shot.

The writer is a political commentator.

The political arena is not unlike the sporting world. More often than not, who has the momentum matters.

The Schulz campaign announced that she is making “a high six-figure” ad buy in the Baltimore and Washington, D.C., media markets.