When President Trump attacked Benjamin T. Jealous at a rally in Montana last week – though not by name – it was an unexpected gift to the Democratic gubernatorial nominee of Maryland. Democrats for months have been trying to nationalize their uphill campaign against Gov. Lawrence J. Hogan Jr. (R) and make Trump part of the conversation. When Trump uttered these 20 words — “In Maryland, the Democrat candidate for governor wants to give illegal aliens free college tuition courtesy of the American taxpayer” – and the crowd booed, Jealous and Democrats were only too happy to publicize it. Jealous on Thursday is expected to get another opportunity to try to nationalize his race, when he is slated to appear on the same stage as two other young, progressive African-American nominees for governor, Georgia state Rep. Stacey Abrams and Tallahassee, Fla., Mayor Andrew Gillum, at the Congressional Black Caucus Foundation annual legislative conference in Washington, D.C. Abrams and Gillum appear to have captured the imagination of progressive activists and donors from around the country in a way that Jealous hasn’t – in part, perhaps, because they are running against vocal pro-Trump conservatives in southern states, whereas Hogan is considerably more moderate by the standards of the modern GOP. 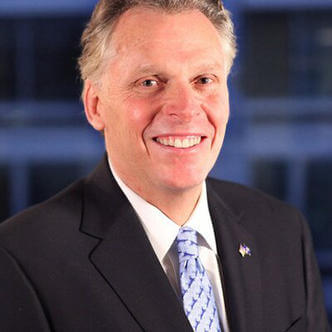 Jealous is continuing to emphasize his support from national Democratic superstars and potential presidential contenders. On Monday, former Virginia Gov. Terry McAuliffe (D) offered his endorsement. “Ben Jealous has the business acumen and forward-looking ideas needed to grow a more inclusive economy that works for all Marylanders,” said McAuliffe, a wildly successful banker and businessman before launching his political career. “His proposals to invest in modern transportation infrastructure, reduce the sales tax, and invest in job training programs will help businesses create new jobs, raise wages, and build up the middle class.” McAuliffe’s tenure as governor of Virginia overlapped with Hogan’s first three years in office. Hogan has used support from some well-known Maryland Democrats to great effect throughout the campaign – and his team has needled Jealous whenever prominent in-state Democratic elected officials are slow to embrace the challenger. But the Jealous camp seems less concerned about wayward Maryland Democrats – especially older, white Democrats long removed from their terms in office who have aligned with Republicans in the past – and more interested in reaching Democratic voters who will be fired up to vote just to send a message to Trump. With that in mind, expect more endorsements from and appearances by national Democratic figures in the state over the next two months. “I expect we’ll have a bevy of national Democratic officials coming in here,” said John T. Willis, a former Maryland secretary of State and political science professor at University of Baltimore. “All the stars.”

Meanwhile, the Hogan campaign on Monday created a new website, mdcantaffordjealous.com, reiterating its oft-repeated point that Jealous’ proposals could drain the state treasury if enacted. The site included a humorous 2-minute video, modeled after a game show, to drive home the point. The Maryland Democratic Party countered with a 30-second video that featured a recent Hogan appearance before a business group in which he is quoted as saying his relationship with members of the Trump administration has been “cooperative and good” on the occasions when he has had to deal with them. It’s entirely possible the campaign – now just 56 days from Election Day – may have to be suspended later in the week if Hurricane Florence hits the Mid-Atlantic with full force. Hogan will be in the news a lot over the next few days, directing the state’s emergency preparedness and recovery efforts. The governor appeared Monday at the headquarters of the Maryland Emergency Management Agency in Reisterstown with a phalanx of officials, urging Marylanders to get ready for the storm. “While we are hoping for the best, we are preparing for the worst,” he said. “…The state is taking every precaution and we urge all Marylanders to do the same.”