Gov. Wes Moore (D) and his supporters partied well into the night Wednesday at their jam-packed, raucous inaugural ball in the Baltimore Convention Center.

But Moore pledged that he’d be on the job early Thursday morning, promising to spend his first full day as Maryland’s chief executive signing executive orders and meeting with law enforcement officials from across the state to discuss innovative ways to fight crime.

Moore, his wife Dawn, and Lt. Gov. Aruna Miller (D) addressed a jubilant crowd of 8,000 in the main ballroom at the convention center, along with another 4,000 who had been herded into auxiliary rooms, shortly after 8:30 p.m. The crowd, in fact, was so big, and so stuffed into certain sections of the main ballroom, that party organizers paused the program at the behest of the fire marshal and beseeched the multitudes to spread out.

“We are holding the entire program until everybody is spaced out!” an announcer said.

When Moore finally took stage with his 9-year-old son James, following an introduction from the new first lady, he vowed to keep it short.

“Now I’ve done a fair bit of speaking today, so I’m going to try and keep this brief,” the state’s 63rd governor said, “because Maryland, I know you’re ready to party.”

Moore hailed his family, and Miller and her husband, but was also careful to thank several people who don’t usually receive public accolades.

“To all the people who’ve worked tirelessly to put this ball together — the catering, the staff, the security, the production team, union workers, and more — we get to enjoy tonight thanks to your weeks and weeks of tireless effort,” he said.

Moore, Miller and their spouses also spoke earlier in the evening at a 20-minute news conference at the convention center, dressed in their party clothes.

Miller said he would meet with law enforcement officers and prosecutors Thursday to discuss ways to better coordinate their response to crime, saying he’d be “hyper-focused” on ensuring that the state improves inter-agency communication.

“The local law enforcement agencies need a partner,” he said. 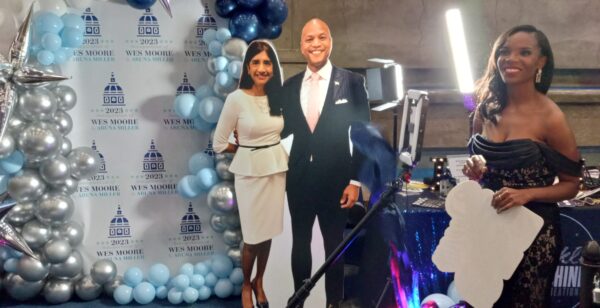 The activities at Wednesday night’s inaugural ball in Baltimore included an opportunity to pose with cardboard cutouts of the new governor and lieutenant governor. Photo by Josh Kurtz.

Moore would not directly discuss what executive orders he plans to issue on Thursday, but it is widely assumed that one of the things he’ll do is release $3.5 million in funding that his predecessor, former Gov. Larry Hogan (R), blocked to train non-physicians to perform abortions in Maryland. That money is due to be released when the next fiscal year begins, on July 1, but making the funds available sooner would expedite the expansion of medical professionals who are able to provide the procedure, which was mandated by legislation that became law in 2022.

Following a question from a reporter about education, Moore said he would consider asking state Attorney General Anthony Brown (D) to investigate school districts that have inflated enrollment figures.

“We’re going to be in close conversation with the AG and local [school] superintendents,” he said.

Asked what her portfolio would be in the new administration, Miller, a former state delegate and transportation engineer, said she would focus initially on three things, beginning with mass transit. Her goal, she said, is “to make [transit] more dependable and reliable. When we do that, we can make it more equitable.”

Miller said she would also promote STEM education, particularly for women and people of color, who are often underrepresented in the sciences and tech professions. And she said improving mental health services would be her other top priority.

“Too many people have suffered from this and we really don’t talk about it,” she said. “It’s really such a silent disease.”

Asked what she hoped Marylanders would take away from what they see and hear about the inaugural celebration, which was branded “The People’s Ball,” Dawn Moore, an old political hand who helped organize the event, said the aim was to make the event as diverse and open as possible.

“There’s an inclusivity that we were very intentional about,” she said.

And asked about a topic that is on many Marylanders’ minds, the Moore family’s promise to their children to adopt a puppy now that they’ve moved into Government House in Annapolis, the new first couple indicated that it’s also something they’re being very intentional about.

“The First Lady is allergic, which makes the whole thing fascinating,” her husband observed.

His wife shrugged that off.

“I’m sure the kids will fall in love with the one that’s supposed to come home with us,” she said.