Former U.S. Rep. Anthony Brown made history Tuesday when he was sworn in as Maryland’s 47th attorney general. He is the first Black man to hold the post.

A couple hundred people crowded a swearing-in ceremony at the House of Delegates chamber in Annapolis. The hour-long program not only highlighted Brown’s qualifications, but also the symbolism his election represents.

“That’s significant,” said U.S. Attorney of Maryland Erek Barron (D), who’s also a former state delegate. “It tells all of us who are Marylanders, and beyond, that we are at the very least running towards that goal of equality, equity, and justice.” 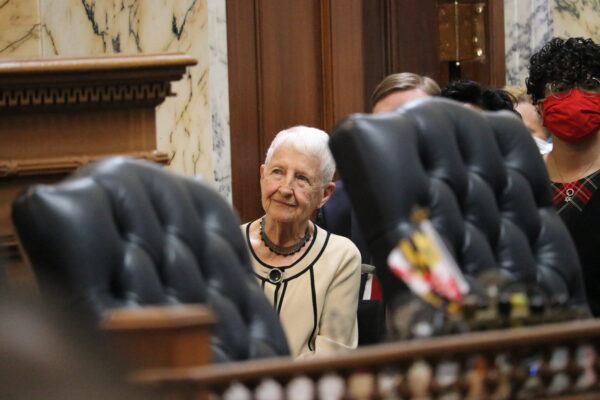 Lilly Brown looks on during a swearing-in ceremony for her son, Anthony Brown, as Maryland’s 47th attorney general on Tuesday. Photo by Danielle E. Gaines.

In remarks during the ceremony, Brown, a former lieutenant governor, outlined what he called an “ambitious agenda” focusing on three priorities: civil rights enforcement, public safety and police reform.

Although Maryland represents the fourth most diverse state in the country where dozens of languages are spoken, Brown said there remains racial discrimination in housing and in the workplace.

To combat that, he will ask Gov.-Elect Wes Moore’s administration and the General Assembly for statutory authority to enforce federal and state civil rights laws.

In a post-ceremony interview with reporters Tuesday, Brown said attorney generals in some states like California and New York and even the District of Columbia have civil rights enforcement authority.

Although Maryland has a Civil Rights Commission that deals with individual complaints and grievances, Brown said the commission doesn’t have the authority to bring class action suits.

“So we’re seeking authority to bring what I believe are the bigger impact cases that involve classes of people,” he said.

On police reform, he wants to double the number of investigators and prosecutors in the office’s organized crime unit. But at the same time, Brown said he will work with the governor, lawmakers and community leaders to reduce recidivism because “of the over incarceration of young Black and brown men.”

Third and finally, Brown said he would seek to bolster efforts to keep communities safe by pursuing ethical police standards.

Mild-mannered A.G. says he will miss being able to haul the ‘bad guys’ into court

One new unit within the Office of the Attorney General that Brown inherited is the Independent Investigations Division, which was established by earlier state police reform laws. Frosh released a report in November that showed the new unit has investigated 23 police-involved fatalities over the past year.

Throughout all of the changes his administration will bring, Brown said one central goal will be engraved within the agency’s policies: equity.

To help with that, he created the newly established Office of Equity, Policy and Management to seek legal advice on whether policy outcomes are equitable.

“As we take enforcement actions — whether it’s consumer protection, whether it’s antitrust, securities, [or] civil rights — we’ll make sure we’re doing it with a lens of equity,” Brown said in a brief interview after the ceremony.

Brown also listed other priorities as bolstering environmental justice efforts and increasing salaries and resources for the office, which is home to more than 800 attorneys who prosecute and litigate cases, as well as provide legal advice to agencies throughout state government. 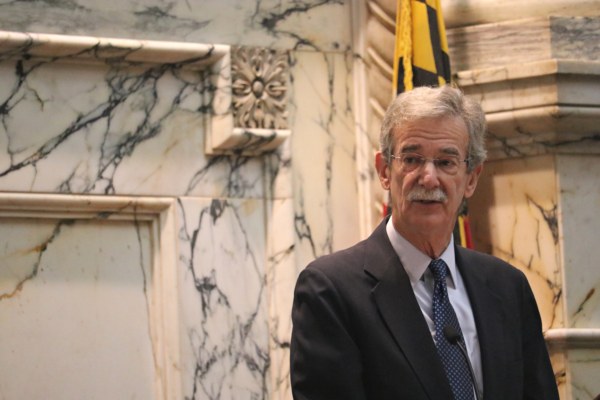 Maryland Attorney General Brian Frosh (D) speaks during the final moments of his tenure in Annapolis on Tuesday. He called the Office of the Attorney General the “largest and most important law firm in the state.” Photo by Danielle E. Gaines.

“The lawyers and legal professionals in the Office of the Attorney General are second to none. They are the best and can work anywhere. They’ve made a choice to serve and represent the state, as well as work for the people of Maryland,” Brown said. “…And I thank each and every one of them. And I commit today to bring my A-game to leading you while we do the important work of the people.”

As attorney general, Brown said he also seeks to make it easier to expunge records for those charged with some cannabis offenses and create equitable participation in the cannabis industry, as the state prepares for legalization later this year.

“I think it shows how much we’re already so aligned on the issue,” Del. Jheanelle Wilkins (D-Montgomery County), chair of the Legislative Black Caucus of Maryland, said after Brown’s remarks. “That has been a clear priority [for] Legislative Black Caucus to ensure the equity licensing and also around the expansion of expungements. The fact that even in his first speech as attorney general, he’s already outlined those issues shows how aligned we are. We’re looking forward to working with him.”

Brown’s ceremony was attended by current and former elected officials across the state, including Prince George’s County State’s Attorney Aisha Braveboy (D), Harford County Executive Robert Cassilly (R) and former state Attorney General Doug Gansler (D), who held the job from 2007 to 2015 and was defeated by Brown in the 2014 Democratic primary for governor.

“I wouldn’t be taking the oath today had it not been for you eight years ago,” Brown joked.

Hogan departed the ceremony early to preside over the swearing-in of his daughter, Jaymi Sterling, as the new state’s attorney for St. Mary’s County. 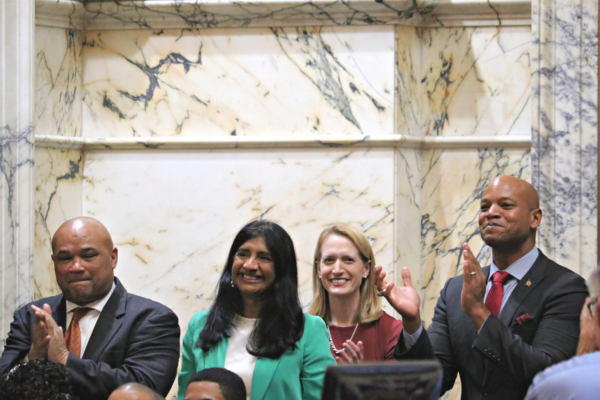 Brown’s two congressional chiefs of staff — Maia Estes and Matthew Verghese, both of whom worked for him in the lieutenant governor’s office — also attended. So did several registered State House lobbyists, including Bruce Bereano, Bill Frick, Lisa Harris Jones and Paul Tiburzi.

A few advocates have already offered advice for Brown such as the Silver Spring Justice Coalition in Montgomery County.

“We look forward to working with the new Attorney General to further these much-needed reforms,” she said. “We also expect the Attorney General to use the power of his office to ensure effective implementation of previously implement policing reform laws and to push back against attempts to water down reform through litigation, legislation, or regulation.”

Josh Kurtz and Danielle E. Gaines contributed to this article.