Same-sex and interracial couples had many of their marriage rights codified Tuesday when President Biden signed the bipartisan marriage equality bill during a ceremony attended by thousands outside the White House.

In a brief speech, Biden told supporters on the South Lawn that “marriage is a simple proposition — who do you love and will you be loyal to that person you love.”

“It’s not more complicated than that and the law recognizes that everyone should have the right to answer those questions for themselves without government interference,” he continued.

Biden used the celebratory signing ceremony to address the November mass shooting at an LGBTQ nightclub in Colorado Springs, as well as other incidences of discrimination and violence, urging Americans to speak out.

“We must stop the hate and violence, like we just saw in Colorado Springs, where a place of acceptance and celebration was targeted for violence and terror,” Biden said. “We need to challenge the hundreds of callous and cynical laws introduced in the states, targeting transgender children, terrifying families and criminalizing doctors who give children the care they need.”

Biden said that racism, antisemitism, homophobia and transphobia are all connected. “But the antidote to hate is love,” Biden said, adding the marriage equality law “and the love it defends, strike a blow against hate in all its forms.”

The law ensures that if the U.S. Supreme Court were to overturn the cases that legalized same-sex and interracial marriages, the federal government and states would continue recognizing those unions.

Such a move by the conservative-leaning court, however, would send the issue of marriage back to the states, many of which still have laws on their books classifying the marriages as illegal. That would mean couples in especially conservative states might once again have to travel to marry, though their home state and the federal government would be required to recognize their marriages under the new law.

The bill began moving through Congress this summer after the U.S. Supreme Court overturned the two cases that recognized abortion as a constitutional right for nearly half a century.

Associate Justice Clarence Thomas, in his concurring opinion in the abortion case, stoked concerns from LGBTQ rights organizations when he wrote that the court should reconsider all of its “substantive due process precedents, including Griswold, Lawrence, and Obergefell.”

Those cases — Griswold v. Connecticut, Lawrence v. Texas and Obergefell v. Hodges — recognized the constitutional right for married couples to determine if and when to use contraceptives, prevented the government from criminalizing adult private consensual sexual relationships and legalized same-sex marriages.

Biden brought up Thomas’ opinion during Tuesday’s ceremony, saying “when a person can be married in the morning and thrown out of a restaurant for being gay in the afternoon, this is still wrong.” 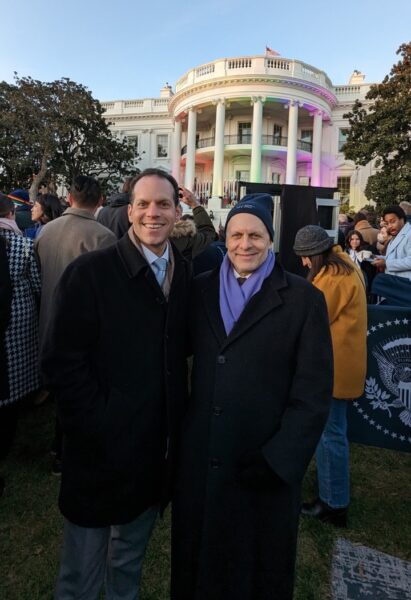 “It’s clear that we can never take critical rights — including the right to love who you love — for granted,” he wrote. “Today’s signing of the historic Respect for Marriage Act and its protections of same-sex and interracial marriage are an important step forward to protect those rights.”

Schumer wore the same purple tie he wore to his daughter’s wedding and for the Senate vote on the marriage equality bill.

“Thanks to the millions out there who spent years pushing for change and thanks to the dogged work of my colleagues, my grandchild will get to live in a world that respects and honors their mothers’ marriage,” Schumer said.

“So yes, this is about making life better for millions of LGBTQ Americans across the country, but it’s also about the countless children and families who will be protected by this bill for generations to come,” he added.

The new law, known as the Respect for Marriage Act, overturns the 1996 Defense of Marriage Act that had defined marriage as the union of one man and one woman at the federal level.

The U.S. House passed the original version of the bill in July following a 267-157 bipartisan vote that had the backing of 47 Republicans.

The evenly divided U.S. Senate, after months of behind-the-scenes negotiating and the addition of bipartisan religious liberty language, voted 61-36 in late November to approve the updated bill, sending it back to the U.S. House for final approval.

House members cleared that final hurdle earlier this month, after the midterm elections, voting 258-169-1 to send the measure to Biden.

But several House Republicans switched their votes the second time around, giving the final version of the bill the support of 37 House GOP lawmakers.

The lone Republican in Maryland’s congressional delegation, Rep. Andy Harris, voted against the legislation — a fact that political opponents raised in conjunction with the White House bill signing Tuesday.

“Sadly, our extremist Congressman Andy Harris voted against this legislation and is still [committed] to his backward and discriminatory beliefs,” the Lower Shore Progressive Caucus said in a statement. “The LSPC is committed to continuing our work pushing back on Andy Harris and his radical ideologies that run counter to basic Eastern Shore values and human decency.”

The law Biden enacted Tuesday also holds three “findings” about marriage, a not uncommon practice that gives Congress the ability to add a bit more context outside  the sometimes technical, legal language that makes up most bills.

The first is that “no union is more profound than marriage,” with lawmakers writing that marriage “embodies the highest ideals of love, fidelity, devotion, sacrifice, and family.”

The second finding acknowledges various religious views throughout the country, with Congress holding that “diverse beliefs about the role of gender in marriage are held by reasonable and sincere people based on decent and honorable religious or philosophical premises.”

“Therefore, Congress affirms that such people and their diverse beliefs are due proper respect,” lawmakers wrote.

The third finding notes that “millions of people, including interracial and same-sex couples, have entered into marriages and have enjoyed the rights and privileges associated with marriage.”

“Couples joining in marriage deserve to have the dignity, stability, and ongoing protection that marriage affords to families and children.”