The Prince George’s County Council held its annual gavel exchange session Tuesday to appoint new leadership, but this year came with a bit of a twist.

However, Ivey made a “substitute motion” and recommended Tom Dernoga instead.

The 11-member body, all Democrats, unanimously chose Dernoga for a position he last held when he served on council more than 10 years ago.

“I believe when I joined the council 20 years ago, I was the youngest member. Now I’m the oldest member, although I might be the wisest,” Dernoga, 63, said. “My new role is [similar] to our President Joe Biden. An elder statesman serving as a transitional leader into a new generation…”

The veteran politician also viewed as a community advocate said he’ll serve alongside “the youngest council ever and seemingly, the most energetic.”

Oriadha made history as the first person from the LGBTQ community elected to council.

The council unanimously selected Blegay, a first-term councilmember, to serve as vice chair, which elicited rousing applause from the standing-room-only audience at the Wayne K. Curry Administration Building in Largo. 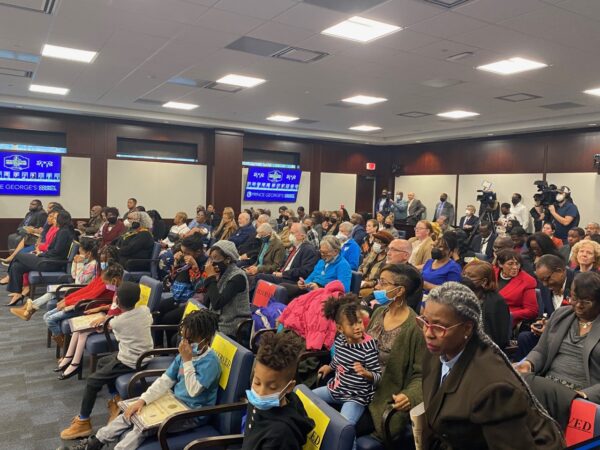 A standing-room-only crowd witnessed the Prince George’s County Council unanimously select Tom Dernoga as chair and Wala Blegay as vice chair on Dec. 6. The audience also heard Blegay proclaim “it is a new day” in the county. Photo by William J. Ford

Dernoga kept his remarks brief to allow Blegay the floor. She spoke for nearly 10 minutes about what she called “the people’s agenda.”

“This is the people’s council. We are a council dedicated to serving our residents,” Blegay said. “It is a new day.”

She pledged to work with progressives and conservatives, but she noted how the previous council voted for a controversial redistricting plan that a Maryland court struck down.

“The residents voices are finally heard,” she said. “This new day is where transparency and accountability are the watch words that guide the council in our commitment to the people’s agenda.”

Blegay said that agenda will focus on issuing advance notices on meeting agendas, increasing and strengthening housing and other social services and preserving green space by decreasing the “over saturation of townhouse development, public storage facilities [and] tobacco stores.”

Ivey will lead the Planning, Housing and Economic Development Committee.

The other committee chair assignments are:

Most of the 11 councilmembers are viewed as more progressive than the previous council, which some residents and advocates saw as working too closely with the executive branch and siding with developers.

Other returning councilmembers are Sydney Harrison and Mel Franklin.

Ingrid S. Harrison is a first-time county councilmember who ran unopposed in the November general election. She is a former at-large councilmember for the city of Bowie .

The council has scheduled its retreat for next week so it can get a “head start” on work and crafting legislation.

During a 30-minute recess, Hawkins told a reporter he took none of Blegay’s remarks personally. He said he also stands by the previous council’s work in handling COVID-19, helping with food distribution and assisting returning citizens with job placement, housing and other services.

“They’re new. They’re excited. They’re a little brash and a little abrasive, but they have every right to be because they are elected,” he said. “We will be there to ensure we’re doing the things that move our county forward. If their actions are not connected to their words, we’ll deal with that as well. I’m excited to work with them, but I’m proud of our record over the last year as well.”

In Montgomery County, councilmember Evan Glass made history Tuesday when he became the first openly LGBTQ member to serve as council president and was chosen unanimously.

The 20th council’s meeting Tuesday also marked the first meeting of the council since it expanded from nine members to 11 members. All are Democrats.

“This is the most diverse and representative council in our county’s history and we all should be very, very proud of that,” Glass said. “When voters, two years ago, approved the charter amendment that I introduced expanding the size of the council to better reflect our county’s beautiful diversity, I did not expect the results to look like this. But looking at this dais, the results have exceeded my expectations.”

However, a few councilmembers expressed displeasure about the behind-closed-doors process that selected new leadership which, they argued, doesn’t reflect the county’s diversity. Both the council president and vice president are white men.

“I’m speaking about polls taken in various manners that could be treated with the same finality as a vote on the dais without much public debate or oversight,” said Mink, the first Chinese American to serve on council. “That process can allow for marginalized voices to be further marginalized… I know that breaking the status quo is hard. We all know that it takes courage and effort, but I think we are all in agreement that it is the right thing to do.”

Friedson will chair the Planning, Housing and Parks Committee.

Councilmember Will Jawando (D-At-Large) will chair the Education and Culture Committee. He is the only Black member to chair one of the seven committees. The other Black member is newcomer Laurie-Anne Sayles, who will serve on the economic development and health and human services committees.

“While we are properly the most diverse council in our history, the leadership…in the committees doesn’t reflect it,” Jawando said. “That’s disappointing to me personally and visually, but also for our county.”

Glass, who will chair the Environment and Transportation Committee, said he’s proud of the committee structure having the most diverse leadership that “this council has ever had.”

When it comes to rules and procedure, Glass said, “I welcome conversation and debate at a more appropriate time. Maybe not on the first day. Once we all sit and we can have conversations as these meetings and hearings have taken place, but there are always ways to do better.”