Comptroller-elect Brooke Lierman (D) unveiled on Thursday the leaders of a transition team that will help her prepare to take the helm of the state’s tax collector’s office come January.

And Lierman — the first woman to hold the post and the first woman independently elected to a statewide state government position in Maryland history — will be advised by a group of seasoned women leaders, as well as the outgoing four-term comptroller, Peter V.R. Franchot (D). 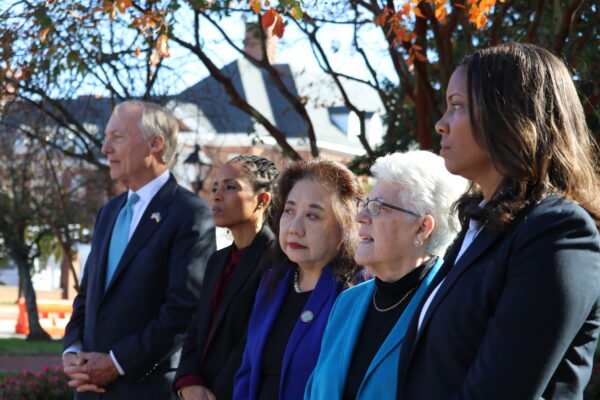 “I am pleased and proud to have their support and counsel as I work to ensure that the comptroller’s office is set up for success on Day One,” Lierman said.

When someone asked recently why Lierman was choosing almost exclusively women to guide the transition, she said she responded simply: Why not?

She said her historic election comes with “a responsibility to make sure that we are listening and learning from the women in Maryland.”

Lierman characterized the transition as a “grassroots, 24-county” effort, which will include people with different viewpoints from across the state.

The transition chairs will guide several workgroups, which will focus on six major issues: procurement and the Board of Public Works; tax administration and customer engagement; data and innovation; pensions; public engagement; and local government engagement.

Franchot was the first to speak at Lierman’s Thursday morning announcement, saying, “Could everyone give a round of applause for Brooke Lierman?”

He then launched into a long explanation about how he sits in his office and looks out at the Louis Goldstein statue and worries about all the pigeons fouling the statue. He also said he sometimes calls DGS to attend to the statue. He then said:

“I think Louie would look down, with his beloved wife Hazel, and say, ‘what a wonderfully historic event this is.'”

“This is not something I experienced 16 years ago, because we really didn’t have a transition. Everybody was mad at me for beating William Donald Schaefer,” he said.

Franchot then bragged about modernizing the office, making it more efficient and more responsive to taxpayers.

“It will be my honor to work with Brooke and the other distinguished people here today to deliver a well-run agency that everybody respects in Maryland and across the country,” Franchot said. “Brooke has shown that she’ll work hard to ensure that taxpayers receive the best value for their tax dollars, she will prevent waste and fraud, she will unlock opportunities for every Maryland resident, family and business.”

When Franchot passed the mic to Lierman at the announcement, Lierman quipped: “Look at that smooth transition.”

She noted that it was a “new era” in Maryland with three statewide offices turning over at the same time — and the first time in more than 100 years that every statewide seat was open on the ballot at the same time.

“So we’ve never seen a transition quite like this,” she said. “And we’re really excited for the work we’re about to undertake.”

On the campaign trail, Lierman has pitched the tax collectors’ office as a way to guide more equitable and climate-conscious statewide policies, and pledged to use the comptroller’s seat on the Board of Public Works to more strictly enforce rules to encourage state contracts with businesses owned by women and people of color, and to make state procurement more competitive by cutting back on single-bid contracts.

Asked which policy priorities she would focus on first, Lierman demurred, saying her first order of business is to understand what Marylanders want.

“I think the first priority of any new leader has to be to listen,” Lierman said.

Said she will also focus on “building the best team possible” before taking office in January, and making sure that the office is modernized.

Kopp said she was confident that Lierman, on the Board of Public Works, “will be focused on making sure that the process is fair, open, transparent, and that the lens of equity and inclusion is focused on every issue.”

Alsobrooks said she was “so impressed” not only with Lierman’s plans statewide, but also with a vision she described for Prince George’s County specifically.

“It’s clear that she has a strong vision for how she will use the comptroller’s office to expand opportunity for all Marylanders,” Alsobrooks said. “From improving infrastructure to helping combat climate change to supporting our small and minority-owned businesses, Brooke has clear plans for her first four years as comptroller.”

Franchot called the comptroller’s office the “most powerful office in Maryland that no one’s ever heard of.”

“She’s going to make it heard,” he said of Lierman.

Asked what he’ll do after Lierman’s swearing-in, Franchot didn’t give specifics.

“I’ve got several irons in the fire and I’ve got two more months as comptroller, and I’ll be talking about some of that down the road,” he said.

On Thursday, Lierman’s campaign also named chairs for each of the six workgroups. They are:

The public can email ideas to the transition team at [email protected].