Brown, who turns 61 on Nov. 21, will serve as the state’s top law enforcement officer and will also helm the largest government law office in the state, which acts as a legal adviser for state agencies, boards and offices.

Brown, a three-term congressman and former lieutenant governor, will take over an office once led by Roger B. Taney, the former U.S. Supreme Court chief justice who wrote the infamous Dred Scott decision in 1857, which concluded that the “all men are created equal” passage in the Declaration of Independence didn’t apply to African Americans. 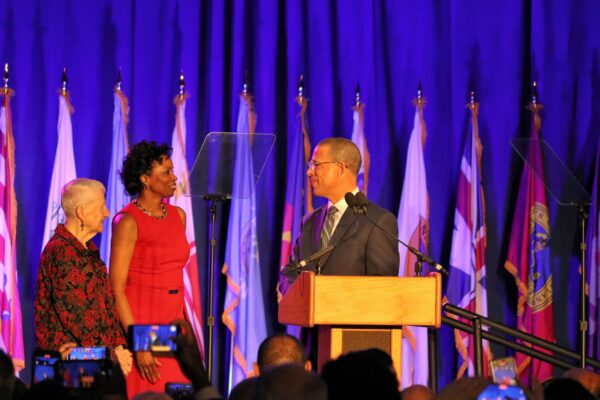 U.S. Rep. Anthony Brown (D) shares a moment on stage with his wife and mother after winning election as Maryland’s next attorney general. Photo by Danielle E. Gaines.

Brown stood on stage alongside his wife, Carmen, and his 95-year-old mother. He began his remarks honoring his parents — his late Jamaican father, and his mother “from the Swiss Alps.”

“They believed in the promise of America, even at a time when America was not fulfilling its promise to all of us,” he said. “Each of us has something to contribute and if you work hard and are determined, each of us should be able to succeed. Maryland, congratulations.”

As of 9:35 p.m. Tuesday, Brown garnered 62% of the vote to easily defeat Republican Michael Peroutka, who had 37% support at the time, according to unofficial results.

Brown said his office will fight for fairness and equity for the more than 6 million Marylanders.

In an interview more than an hour before the polls closed, the attorney general-elect said one of his priorities will be seeking to decrease the incarceration of Black men. He called it “one of the greatest challenges” in the state’s criminal justice system.

Peroutka, 70, a former Anne Arundel County Council member, encouraged supporters to vote later in the day Tuesday and only use a paper ballot to help ensure “the restoration and assurance of election integrity,” part of a nationwide conspiracy theory.

He’s also a former member of the League of the South, a controversial organization that believes the nation should be governed by white Christians.

No statement was available from the Peroutka campaign Tuesday night.

Brown will replace Attorney General Brian Frosh (D), who has been in the office since January 2015. Frosh, 76, decided to not to seek a third term and chose to retire after 36 years in elective office.

For Brown, this will be a return to state government; he served as lieutenant governor under former Gov. Martin O’Malley (D) from 2007 to 2015. He served in the House of Delegates from 1999 to 2007.

After an unsuccessful run for governor in 2014 against now term-limited Gov. Larry Hogan (R), Brown won an open congressional seat in the 4th District in 2016. When he announced his desire to succeed Frosh last fall, Brown noted that he had previously thought about running for attorney general in the 2006 election cycle, before being tapped as O’Malley’s running mate in 2006. But he never fully articulated a vision for the job.

Alex Rogan, 20, chatted Tuesday with U.S. Sen. Chris Van Hollen (D) outside the Ritchie Coliseum at the University of Maryland in College Park.

The coliseum served as not only a polling site for voters, but also houses a gymnasium where Rogan came to exercise.

The University of Maryland junior already voted by mailing in her ballot from Montgomery County. One of her choices was Brown for attorney general. She wants Brown to serve as an advocate for abortion rights, with Maryland as one of the few states in the nation wit h pro-abortion laws.

“I would hope he’s a proponent for abortion rights at the federal level…and being supportive of other states that are fighting for that,” Rogan said. “Hopefully [President Joe] Biden can codify that into federal law. [Brown] can join other attorney generals in pushing for women’s rights.”

Besides Brown’s military background, he will also bring a new perspective to the office as a Black man.

The victories by Brown and Moore represent a level of diversity Maryland has never seen among its top elected officials, with no white men serving in top statewide offices beginning in January.

Former Del. Aruna Miller (D-Montgomery), who was born in India, will become the state’s first woman of color and first immigrant to serve as lieutenant governor.

Del. Brooke Lierman (D-Baltimore City) was elected as the state’s first woman to serve as comptroller.

“One of the things you want in any democracy is for people to look to those who are in elected office and see a reflection of themselves in some way and feel that their voices are going to be heard,” Eberly said. “When you have a situation where a state has lacked behind in regard to diversity in its offices, I think that could be discouraging to folks who wonder sometimes, ‘Is there someone there who has walked in my shoes? Is there someone who understands the unique challenges their community might face?’ That’s where sort of the hope in having more diverse leadership comes in.”

The attorney general’s office will also assess new cannabis policies after Marylanders overwhelmingly supported a referendum to legalize it for recreational use. As of 10:34 p.m. with 1,702 of the 2,074 precincts reporting, about 65% of voters supported Question 4 compared to 34% opposed, according to unofficial results.

With voters choosing to make recreational use legal for adults 21 and older, many new policies and procedures will go into effect.

The legislature began preparing for cannabis legalization by integrating the Maryland Medical Cannabis Commission within the state’s Alcohol and Tobacco Commission.

Other requirements in legislation approved this year include enabling a person convicted of a single possession offense to petition to have a record expunged and possession of cannabis up to 2.5 ounces would become a civil offense in July.

By Dec. 1, which is before Brown gets sworn in, the attorney general’s office must submit an opinion to the General Assembly assessing the impact of cannabis legalization on the ability of police officers to conduct searches of individuals and vehicles.

Recreational cannabis use wouldn’t be officially legal until July.

In a statement, Olivia Naugle, senior policy analyst at the Marijuana Policy Project, said the passage of Question 4 “will finally end the failed era of cannabis prohibition and take a more just and equitable approach towards cannabis policy.”

Del. Stephanie Smith (D-Baltimore City) said Maryland will now have a greater chance to invest in communities that have been disproportionately affected by the criminalization of drugs.

“No state that has legalized cannabis to date is as racially diverse as Maryland,” she said at the Democratic party celebration in Baltimore. “We have an opportunity to create a new standard for what really means equitable distribution and… the revenues actually go to the communities that were most harmed.”

Whether legalize cannabis use was also on the ballot in four other states Tuesday. Prior to Tuesday, lawmakers in 19 states and the District of Columbia made recreational use of cannabis legal.