Gubernatorial hopeful Rushern L. Baker III pledged on Tuesday to make the long-stalled redevelopment of the State Center complex in Baltimore a priority.

His campaign also accused a leading rival — Comptroller Peter V.R. Franchot (D) — of withdrawing support for the project to curry favor with a Democratic donor and powerbroker who owns commercial property in the city. The Franchot campaign cited other concerns to support his decision.

At a news conference, Baker (D) said he envisions demolishing forlorn buildings that occupy the 28-acre site and replacing them with a mixed-use development that includes office space, housing and retail.

The Hogan administration began moving thousands of state workers out of State Center and into downtown commercial space last year. Approximately 3,300 employees were shifted to new digs — in part because of ongoing safety and ventilation issues inside the 1960s-era buildings and because the pandemic-induced real estate glut led to a drop in office rates.

Baker said he would work with city leaders and nearby residents and institutions to craft a revitalization plan that benefits both developers and the surrounding neighborhoods. 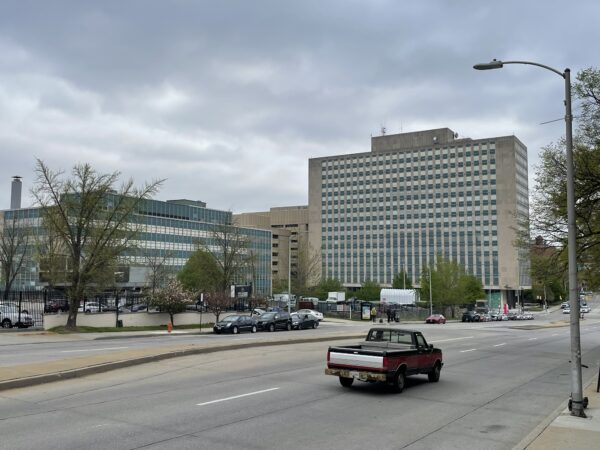 The long-stalled redevelopment of the State Center complex in Baltimore has been the subject of false starts, lawsuits and allegations of developer influence. Photo by Bruce DePuyt.

“You’re anchoring the development with government offices, and rethinking and reimagining, especially now, how that can help with a mixed-use development,” he said.

State Center sits atop a Baltimore metro stop and a short distance from the city’s light rail line, making it a prime parcel. Baker, who led redevelopment efforts in Prince George’s when he was its county executive, said the abandoned buildings are “a dinosaur” that separates neighborhoods.

“It has great potential,” Baker said. “And the ability to bring these communities together.”

Franchot, Maryland’s tax-collector since 2007, initially backed the plan to add 2 million square feet of new office space to the site. In a 2011 letter to the head of the state Department of General Services, however, Franchot reversed course, saying the $1.5 billion project would result in taxpayers paying “premium rates in a bargain-rich market where high vacancy levels will, unfortunately, be the norm for the foreseeable future.”

Franchot’s abrupt withdrawal stunned the project’s backers and nearby community leaders, and it sparked suspicions that he was caving to inducements from downtown property owners.

In an “open letter” to Franchot, a coalition of developers and community associations expressed “dismay and disappointment at your change from support to denigration of the State Center project.”

“[T]he community and the press are left thinking that your change of positions is a purely political move and that Inner Harbor business interests outweigh the promises to neighborhoods indicated in your votes to move the project forward,” wrote John Kyle, head of the State Center Neighborhood Alliance. “The wealthy businessmen with whom you now side have dismissed this project and our working-class community as undeserving, and our very worthwhile project has been tossed around as a political convenience.”

Len Foxwell, a Baker advisor who served for 12 years as the comptroller’s chief of staff, said on Tuesday that Franchot ended his support for the project a few days after a private meeting with Peter Angelos, the owner of a mammoth law firm and a Democratic mega-donor.

“He’s a major downtown property owner and his theory was that creating a major mixed-use facility up here would essentially be state-subsidized competition with downtown Baltimore,” Foxwell said.

Franchot brought a member of his fundraising team to his meeting with Angelos but no one from his government staff, according to Foxwell. “It was all about fundraising,” he said.

Foxwell left the comptroller’s office in 2020 after media reports of an extramarital affair.

Baker echoed Foxwell’s theory about Franchot’s change of heart. “You saw who funded his campaign when he — all of a sudden — changed his mind and decided he was against this project,” he said. “It was Peter Angelos. It’s corporate money. That’s why we don’t take any.”

Baker is using the state’s public financing system, which encourages small donations and prohibits a candidate from accepting corporate contributions.

In a statement Tuesday, the Franchot campaign called the original State Center agreement “a sweetheart deal for the developer, funded by our taxpayers.”

The campaign noted that when the Board of Public Works voted in 2016 to cancel the state’s contract to redevelop State Center, all three members of the panel — Franchot, Gov. Lawrence J. Hogan Jr (R) and Treasurer Nancy K. Kopp (D) — supported the decision to move on.

Former Baltimore Mayor Bernard C. “Jack” Young attended Baker’s event and applauded the candidate’s pledge to advance a project that has been “stagnating for 12 years now.”